Lionel is heading downstairs, dreading to find what causes the pungent small.

Lionel did not see himself as any form of leader, but he happened to put foot-to-stair quicker than anyone else and before he knew it, he was leading the way down the spiral staircase into a foggy, smelly, dimly-lit area. One floor down (with another to go to reach the kitchen, where they expected to find Sir Darfin to report and find out what was going on), in the shadows, Lionel and Tommi (who was first behind him) heard movement from the direction of the outer wall. There, they knew, were four suits of armour. Two of them drew their swords and stepped off their pedestals in a threatening manor.

Through the smoky fog, one eye on each glowed with fire while the other seemed to add to the smoke, smouldering menacingly. 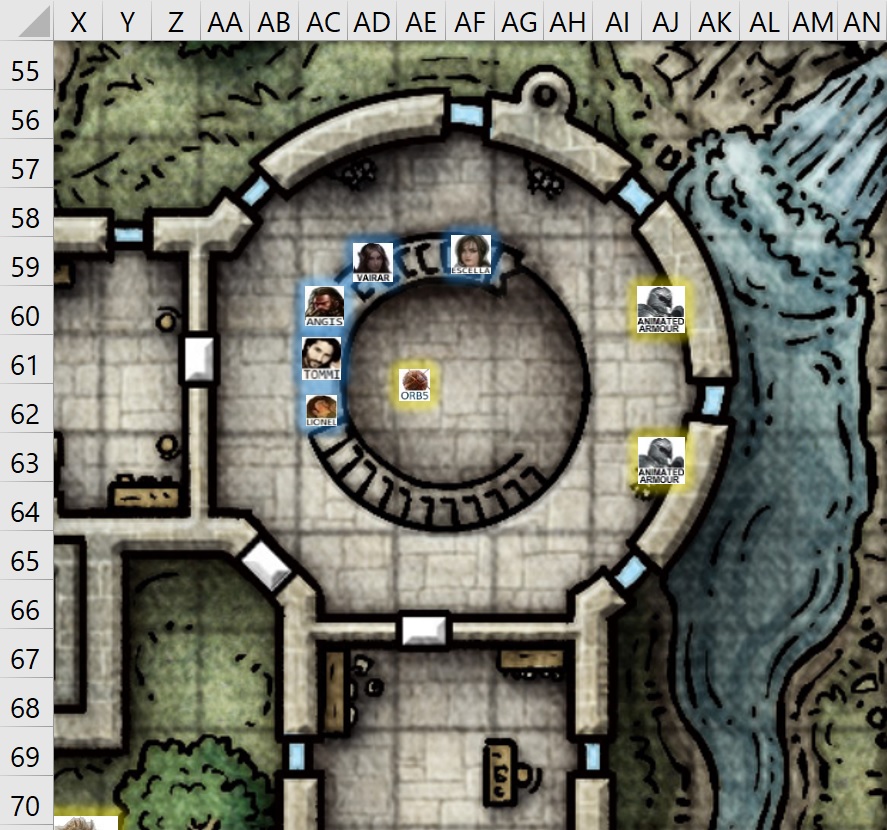 Escella casts a message cantrip, pointing down the stairwell in the direction she hopes Sir Darfin is within 120 feet of her. She says, "Armored statues in stairwell are animated. Do you know anything about a supposed titan name Sing-Axe? I think he is responsible, fire in one eye, darkness in the other. You may reply to this message."

Supporter
Tommi continues down the stairs, but stays clear of the animated suits of armour when he reaches to floor.

He loads a stone, and with a quick overhand shoots it down towards the head of the leftmost one, where (he hoped) Orb 5 was already positioned t help.

EITHER: The shot goes wide, and hits the wall beside the suit.,
OR: the shot rattles onto the helmet and knocks a substantial dent.

“I’m guessin’ those suits o’ armor ain’t s’posed t’ move,” Angis said. He pushed past Vairar down the stairs a bit as he drew his heavy crossbow. Muttering a spell, he adjusted his aim and then fired at the suit closest to the stairs.

Vairar walks with his new weapon above Angis' head. When the constructs move he awaits the people to clear the stairs.

He moves toward the closest armor as soon as possible.

OOC: if possible he will move and attack, but essentially delays his turn until he can do so.

Above most of the others on the spiral staircase, Vairar vaulted over the railing. He landed hard but unharmed on the same level as the armours and he rushed one with his pike, attempting to hold it back as it advanced.

Vairar used the reach of his weapon to try and hold the monster at bay or cause it some extra damage. But the landing was just hard enough to make his thrust weak and the spearhead only dinged on the metal without effect.

To Tommi's dismay, ORB5 had disappeared into the smoky dimness below. His stone pinged harmlessly off of the suit of armour as the thing stomped forward. Viarar leaped into the way, halting its advance, but he too had his weapon glance off of the tarnished metal. The metal being tarnished was a strange sight, as the Floshin servants had kept them well-polished. The Daggerfordians had passed them by not long before, and they had been wonderfully shined. Now the metal was dark and stained, which added yet another layer to their menacing appearance.

Escella sent a magical message to Sir Darfin, and while she waited for an answer, she watched from the stairs as Angis let a quarrel fly from his crossbow and the quarrel broke as it collided with the armour's shield. No answer came to her. Something was very wrong.

Supporter
Tommi whistles, spins his finger around in a quick circle beside his head and points to one of the suits of armour.

"I tried to message Sir Darfin. No response. We need to get down there," Escella says.

Lionel was watching in horror how these suits of armour suddenly came to life. He watched them to understand how they were fighting... they walked clumsily but looked very sturdy. Their armour would protect them... but maybe if one aimed for the glowing eye one could inflict major damage. And with that insight, Lionel brought up his crossbow and shot carefully. The bolt skidded off the helmet without effect but there was a dint close to the eye slits.

The first of the two tarnished armours pushed Vairar's pike aside and approached him, thrusting its sword at the elf who took a shallow slice to the arm before raising his pike to block with the shaft. Lionel's quarrel cracked harmlessly off the other one's helmet as it too advanced on Vairar. The thing's movements were not terribly swift and Viarar sidestepped two thrusts.

Tommi whistled, and ORB5 responded with a squeak from the fog below, and eventually returned, flying around the armours' heads. 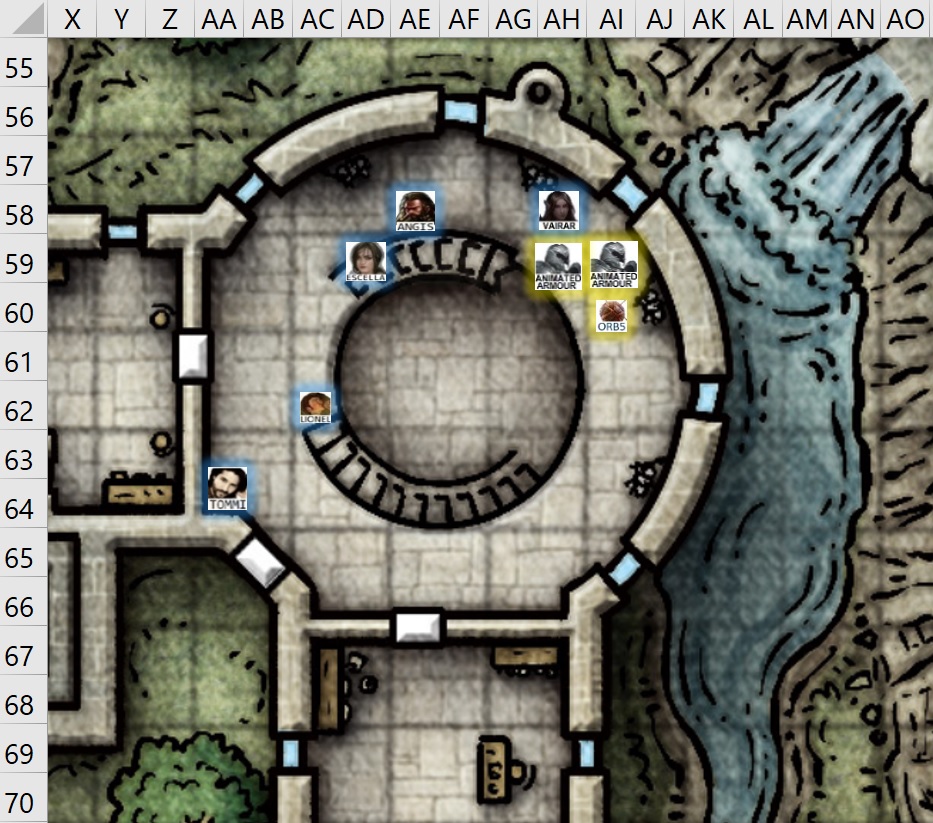 Gritting his teeth, Vairar calls upon the power of storm within, but restrains himself at the last moment seeing the tiny construct hovering behind the armors. Shrugging, he uses the orbs distraction to his advantage.

Shatterspike hits the armor that hit Vairar moments before and a peal of thunder echoes in the confined space. Visible dent appears in the armor as magic of the spear works its destructive potential. The spell Vairar used also remains as a faint echo, just waiting for the construct to move through it.

OOC: I was thinking of blasting them away with thunderblast...but Orb5 would be hit too.
22 damage plus potential 8 if it moves

Angi dropped his crossbow and moved up beside Vairar as he drew his two battleaxes. Unfortunately, his axes clanged ineffectually against the plate armor.

Escella moves to the top of the next stairs down and sends two Eldritch blasts at the armor that is most damaged, returning to her missing ways.

Supporter
Tommi moves himself around the southern end of the grand staircase and lobs a stone at the metal suit. He hears it land just below the creature's raised visor and hears the stone rattling back and forth within the armour suit until it settles in the thing's foot.

"Yes!" the boy exclaims, absurdly proud of himself, before he steps back.

Just as ineffective as their living enemies, the constructs get in one anothers way, dinging against the walls, bouncing off each other, scratching against the balustrade, and pinging off the priests magical weapon.

After the fussilade of swings, the priest only feels the blessing of his goddes in the form of the moving air from near misses.

Yesterday at 8:42 AM
Leatherhead