Escella arranges to go in next to last (and only next to last because she expects a martial character to insist that they be last).

Tommi slaughtered the bragging but informing worg, and the battle was over. Though they were aware that there should be a fourth worg - it did not appear. Oh-Six flew up into the sky and reported that it was in the center courtyard, perhaps remaining to guard a door.

With the danger past, the bickering resumed. Lunn led the way through the servant's entrance, carefully searching the area for traps. The old brass kitchenware that had made so much noise was scattered about what would have been a service room, with the remains of three wooden tubs with washing boards, a few buckets, brooms, dirty rags, and other ruined housekeeping items. A rusted iron cauldron hung from a hook over the fireplace. The door opened under a staircase, that led upward.

Above, the noise of of stomping feet and dragging furniture suggested that the room above was being rearranged, most likely to create defenses against them.

"Does that sound like it's right above us?" Escella whispers. "Think we could collapse the ceiling here? Hard to make an ambush when the floor disappears from under you. I ask because I'm not well versed in construction or in this case wood rot."

Supporter
"We could also smack at the ceiling over there" (Tommi points as he whispers) "to split their attention. Even as we come up through the stairs."

Vairar enters after the group and tests the integrity of the ceiling with his pike. "I can blast a thunderwave into it and hope it gives away. By the sound of it, they already know we're here so no use to try and be silent. Other than that, I can charge into the barrier above and do the same. It may give you some breathing space to come and save me. Tommi, you're NOT charging the barricade. Especially not as a first strike man. There are people with actual armor here."

OOC: in the interest of moving things along, if everyone agrees, Vairar casts Shatter (ASSUMING THIS HAS ANY CHANCE OF WORKING as determined by the group expertise (dwarves?) ).
He does max damage (24)

"Shatter sounds cool. The healer rushing at a fortified barrier, not so much," Escella says.

Supporter
Tommi does not understand Vairar's concern. He's still pointing to the roof where he thought he would be tapping the floor above.

"Wouldn't think of it," he says with a shrug. He draws three stones from his pocket, cups them in his hand, and blows, as he puts the reluctant Gutter back in his belt.

Helgrim studies the structure intently, moving up to any support beams or stone structures, almost putting his big nose into it.

"Aye," he mutters to himself, nodding then repeating the process at different spots before reaching a conclusion.

Lionel finally came out of his stupor and joined the rest of the group.

He carefully sticks to the doorway, in case the ceiling is about to come crashing down.

Supporter
"Guys, um, Escella, Excuse me. What are we doing?" Tommi looks at his companions. "I mean really, What? Why are we trying to bring the house down with magic, when a minute ago, nobody wanted to come inside? What good does that do? We're not even sure who it is up there. We've gone from sneaking in to destroying the floor? I know you all don't think much of me...." He's looking at Vairar as he says this, but he could be looking at others. "We keep sacrificing advantages that we have for no good reason. They know we're here right now. That's worse than where we were 5 minutes ago. Why don't we leave, and just see where things stand in an hour, or in two, or by morning?"

"I wanted to secure the perimeter before we came in," Escella says. "So don't look at me like that. I'm not sure we have a well-defined goal for what we to accomplish here. I was expecting to find a force of gnolls here. If there are gnolls here, they don't treat this place like a fortified encampment. Also, you're right. We should just go into the building through another door since obviously we are expected here."

"Don't underestimate yourself, Tommi. You're brave. Older folks forget how it is to be young and reckless. You rushing out - again - is what possibly prevented the stealth by attracting the hyena. Or maybe not. But if there were four of them and with you out of easy reach...you can see how it could go differently, right?"
Lunn, more experienced warrior, tries to explain what he thinks Vairar thinks. After all, the elf isn't really all that old as elves go.
"Anyhow, here we're not trying to bring the house down, but avoid the barricade being setup up above. I don't like the idea because there may be folks that think we're gnolls and they are defending themselves. But I don't think so. And crashing one floor shouldn't bring the house down. It is human built after all. Anyhow, you constantly have this tug-of-war between rushing in and overcautious and too slow approach. Look at how well went the attack at the orc camp. We had a plan and stuck to it.

So, how about...Escella and Tommi, you agree on a course of action that will satisfy both your needs for risk and caution. And the old farts will go with it vetoing only the suicidal things."

Kobold Stew said:
"Guys, um, Escella, Excuse me. What are we doing?" Tommi looks at his companions. "I mean really, What? Why are we trying to bring the house down with magic, when a minute ago, nobody wanted to come inside? What good does that do? We're not even sure who it is up there. We've gone from sneaking in to destroying the floor? I know you all don't think much of me...." He's looking at Vairar as he says this, but he could be looking at others. "We keep sacrificing advantages that we have for no good reason. They know we're here right now. That's worse than where we were 5 minutes ago. Why don't we leave, and just see where things stand in an hour, or in two, or by morning?"
Click to expand...

"Tommi, nobody wanted to get inside because we waited for you to return. As soon as you came close, we entered. No one wants to just up and go leaving you to fend for yourself. Now that we're inside, we hear they are preparing the defense. So, instead of going into those defenses, we're trying to bypass them. If you have better plan, let's hear it. I agree with Lunn...again. You two get together, come up with a plan that will not contain anyone rushing off to death or waiting until you all die of old age and we can go with that."

"I don't want just the two of us to make a plan," Escella says. "All of us should discuss a plan. More input, more ideas, better plans. As for my view, this entrance is compromised. We should find another where they can't plan for our arrival. Or we should continue with bringing the ceiling down. The only plan I'm against is going up the stairs right here."

"We will all form a plan. But the longer we discuss now, longer they get to prepare. And even ambush us from behind since we're blind in here. You two should agree first, with inputs from us since you're the youngest and thus most creative. And in opposite sides of the caution spectrum."

Supporter
"Vairar, Lunn, Escella. You'll forgive me, but that's nonsense. We had the option for stealth, and that was given away." He points at the roof above, where the scraping is still going on. "I was in no danger, and you all lingering outside slowed us down. It puts us at a disadvantage now. If you don't want me here, say so; but kindly don't assume I'm a fool.

As it is, we are now in a very poor situation. My advice would be to go in through another door, or in through the roof, if we want to remove the threat form this house. That's better that staying here, blowing the floor, or facing a barricade. At least to me. But that's only a suggestion.

I don't tell you what to do. You might consider the same courtesy for me."

"Another door was also my idea. So the presumed young'ens agree. Let's go," Escella says.

"I ken that I've nae been with ye long," said Grottur, "But ye're better'n all this bickering, the lot of ye. Tommi me lad may be young, but I've nae seen many who can leg it like he can. He's no need fer heavy armour when he doesnae plan t'stay 'n fight. An' ye need nae wait fer'im when he can run past near all of ye."


He nodded to Escella and added, "Aye, ye heard the lass! Let's get back oot there and look for another way in." 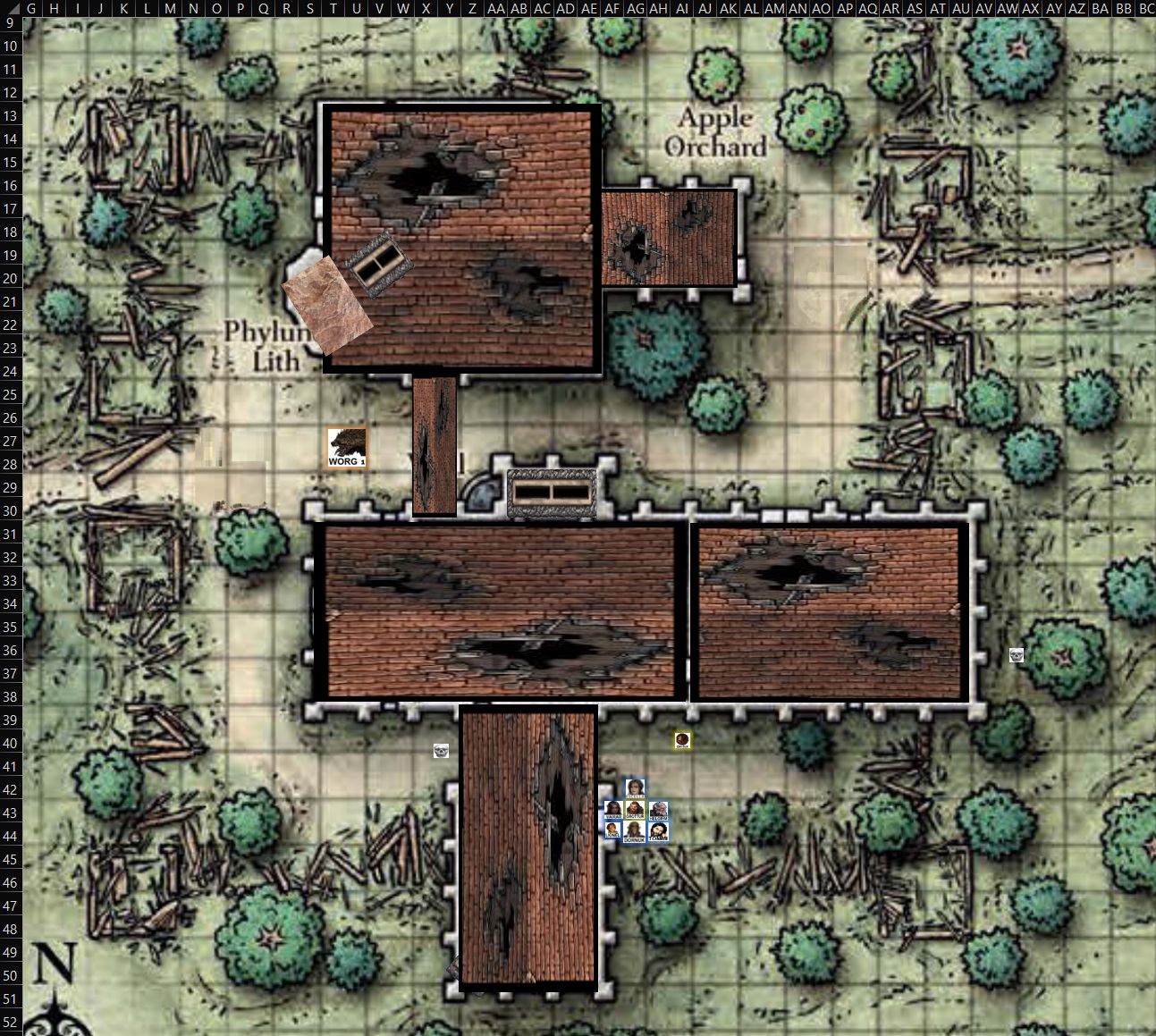