Having travelled this road many thousands of times in the past five centuries, Sir Dafin was intimately familiar with every curve, bend, tree, and stone. However, he had not left the road for longer than these particular animal trails had existed; yet still, he easily led the Daggerfordians along them. With the Boon of the Elk (as provided by Tommi), they left no trace of their passing and made no sound.

A little under a half-hour after leaving the manor house, the group found the orcs. The had made camp in the shelter of a rocky overhang, grown thick with underbrush. Even silent, it was difficult to get close enough to take full stock of the enemy, sheltered as they were in the shadow of the overhang. ORB5 began to buzz foward, flying to make a count of them, while Dandin and Escella led the way up toward the road. It was a steep climb and the group kept hidden by using a rocky cliff and a large boulder for cover.

There were quite a few orcs spread out along the road, keeping to the sides under the cover of the foliage. A full count had still not yet been made when Dandin realized that there was an orc not ten feet away from him, on the other side of the boulder. The others were not far behind, but they were still working their way up, and Dandin knew that eventually they would be spotted. 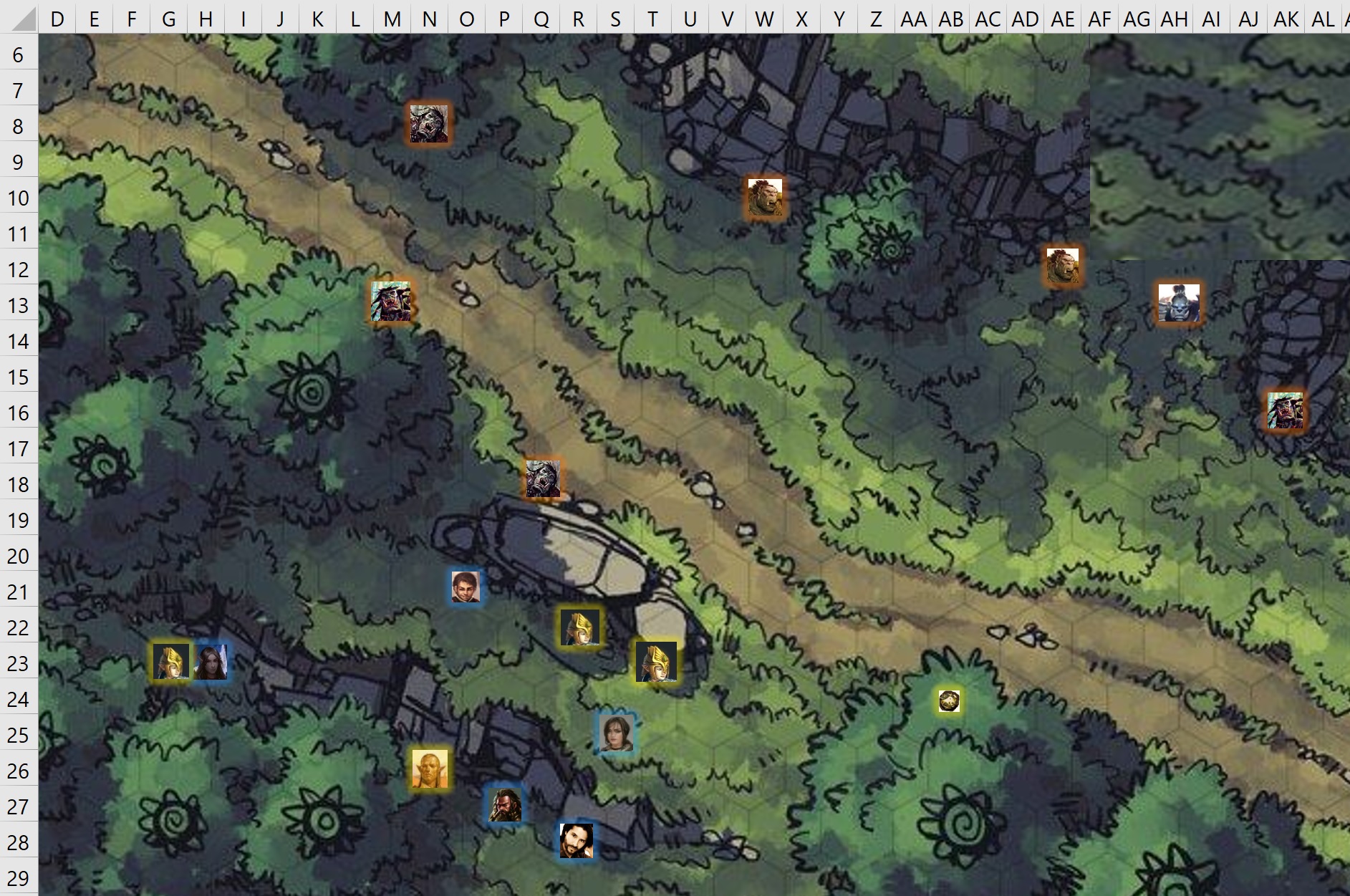 As the danger approaches so does elven lord become quieter, his mien getting serious. Killing is close and it is never light-hearted thing to do. He thinks on his magic, but at the moment just holds the sword ready.

Actions: double move to around T24 (or as close as possible - behind the boulder)
OOC: this guy could kill the party by himself

Also, what armor are they wearing? Warms up Heat Metal
Last edited: Jul 4, 2020

Supporter
Tommi makes his way towards the road. Tommi blows into three pebbles he takes from the cliffside.

Dandin was disappointed as he peeked around the large boulder at the nearby orc. These orcs appeared to be wearing hides and instead of the axes that were the most common weapons of their kind, they wielded claw-like weapons, strapped to their forearms with knotted rope or sinew. In addition, he noticed that most of them appeared to be female.

Dandin peeks over the rock for a moment and smiles before loweing his head back down again. This was too perfect. Maybe he could get the orcs distracted for more fun and profit. He saw another orc over by a nearby tree and grinned as he held his finger up to his lips for the others to see.

Then he whispered a little message to the orc by the tree.

"Hey lump face! I 'eard that an 'elf wench were yer mammy!"


Using Message, I only wish Dandin knew orcish, but even if he doesn't understand the words, it should piss him off anyways. Deception: 1d20+5 22 to sound like an orc.

Side note, if they're metal and touching skin it would be enough to make the spell cause automatic damage with no save until they could remove them. But I'll probably save it in any case. Only have so many 2nd level slots left.

Once their presence is revealed, Escella casts a special form of darkness, targeting the Orog, hoping to catch the two orcs next to it in the 15 foot radius darkness. Escella can see through this darkness. "Take the visible orcs first, the ones in darkness should be delayed."

The Boon of the Elk was so amazingly useful that the orcs did not notice as the Daggerfordians and the Elves worked their way up the steep slope toward the road - they slipped through the thick underbrush, which only swayed slightly as if a mild breeze were passing through.

Even the heavy breathing of Angis, as the Dwarf hiked up the steep hill, was carried away with the breeze. He shuffled around the rocky switch-back and crept low through the bushes. He stopped just short of the road, staying low, and carefully loaded his crossbow.

The orc by the tree spun around, answering Dandin's spell in a thickly-accented version of the common tongue, "Eh? Hoo sezzit? Shawyer suff!"

The one across the road from her said in orcish, "What're you doing? No one's there."

The first responded to the other in orcish, "But I heard'im!"

Vairar and a Sun Elf Guard worked their way along the bottom of the cliff to the switchback. Sir Darfin came up behind the boulder - he was vastly experienced but somewhat out-of-practice for this sort of work, and he did not want to make his new allies feel unappreciated by taking over the operation. He nodded to the guards, who understood their jobs, and kept quiet. He was here to see that they succeeded and stayed safe.

Tommi came up behind the boulder, holding warm stones and his sling. He found a nice spot to hide, and was thrilled to notice that the boulder was cracked in half - with a tight crevice between the two pieces through which he could see an orc. This would serve much like an arrow-slit, allowing him to sling stones through it while staying behind the cover of the rocks.

Seeing that everyone was nearing position, and hearing the confusion caused by Dandin, Escella decided that it was a good time to act. She summoned a dense magical darkness around the already shadowy, guarded opening of the rocky overhang, centred on the largest of the orcs that she could see.

From her darkness, there were shouts of confusion that revealed the presence of more orcs that had been out of sight. 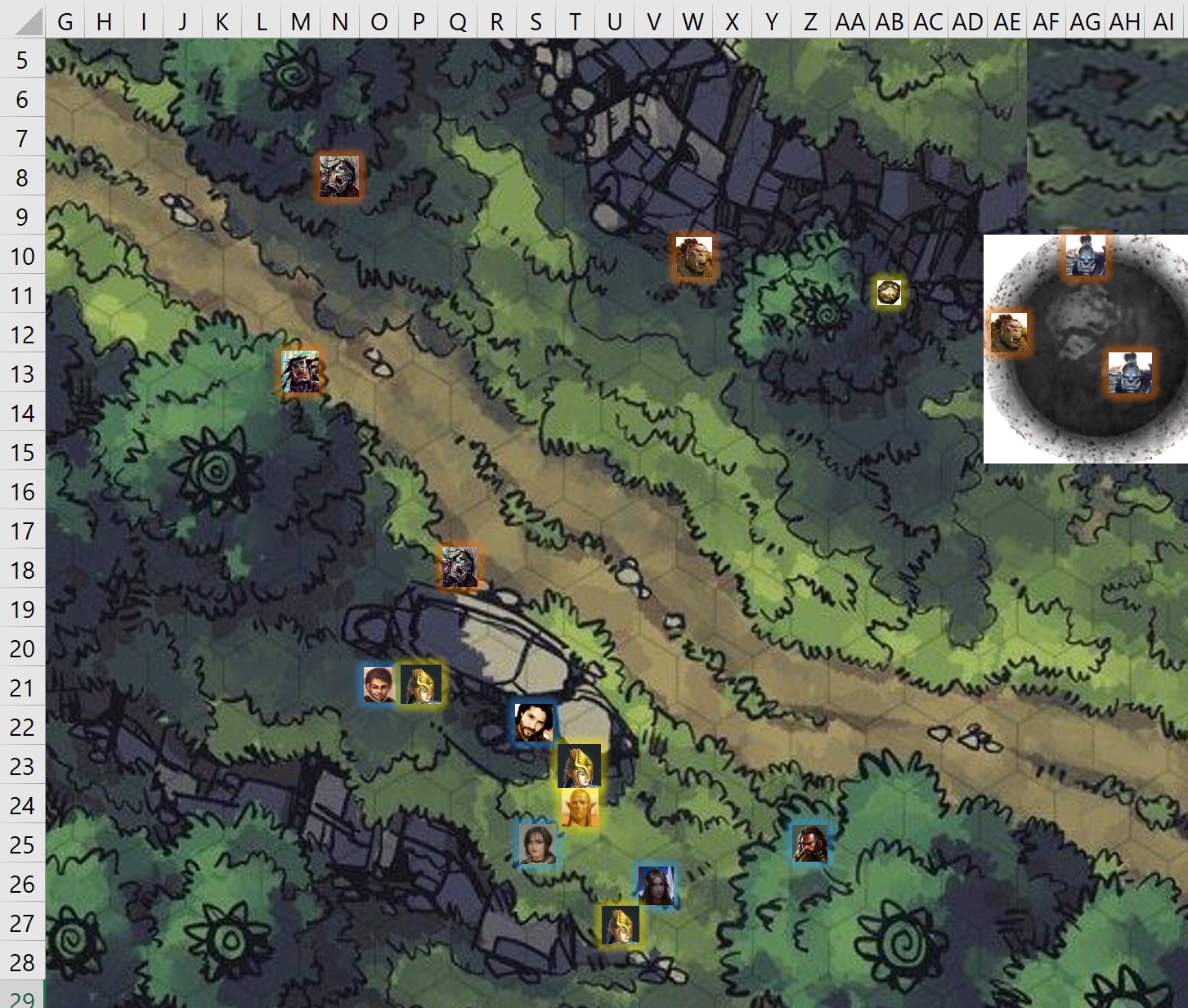 Don't forget advantage on the shot, assuming you're shooting at one of the orcs in the darkness.

Sling: 1d20+4 8 1d4+2 6
Advantage: 1d20+4 20 (didn't see the part about getting advantage until after I posted.) Editing post.
Dandin laughed out loud at the confused orc and stepped out just long enough to sling a stone at the oaf. The stone crashed against the orc's head leaving a sizeable welt. As soon as the stone flew, the halfling turned and ducked around behind the elven guard who'd apparently been assigned to protect him. As he ran he stuffed the sling back into it's pouch.
Last edited: Jul 5, 2020

Vairar moves closer to the road, but doesn't step out yet. Calling up the blessing of Winged Mother, he covers those he expects to be in melee.

Elven lord holds his place adjusting just enough to see across the road. One orc, alone, under the cliff, is the target of his most basic attack magic. Fiery ray shoots across the road and into the plant growth on the other side and surprised yelp and curse in orcish can be heard from there.

Supporter
Through the crannied hole in the wall Tommi sees the orc making his way. With a single overhand spin he lobs a stone through the hole. It hits the orc, cracking him on the head. Tommi remains hidden in position, amazed at how silent everyone is.

Angis crouched, hidden in the foliage, and took aim at the orc by the boulder (Orc 1, Q18). He mystically marked the orc and took his time before firing. The bolt caught the orc in the side, sending her staggering.

Spells
1) 1/3 Absorb Elements, Cure Wounds, Hunter’s Mark
4/4 Boon of the Elk. Can cast Knock four times (without the loud sound) as an Action. Until he uses the last one, non-good aligned Fey count among his Favoured Enemies.

Their ambush went as well as could be expected. Dandin and Tommi slung their slings, and the elf guards threw javelins. Vairar prayed for blessings, while Sir Darflin flung flames across the road. The orc there rushed toward them on fire, but fell before getting far.

Angis, staying low, shot the closest orc with his crossbow. With a quarrel in her back, she turned and rushed toward him howling with rage, but was intercepted by one of the elf guards, who blocked her claws with his shield. Dandin ducked back behind another guard, and the orc he'd struck with a stone clawed her fiercely, but the elf held her own.

Orcs began to work their way out of the rocky overhang, through Escella's darkness, while she fired an eldritch bolt at one up the road who was rushing toward them. Something large moved in her darkness. No one could make it out but her (it was moving quietly, and ducking low behind the underbrush, but she was pretty sure it was an ogre - and there was something else there as well, but she could not be sure what it was.)

Then, from up on the cliff, two arrows rained down, striking Angis through the cover of the bushes. An orc was up there with a longbow, and he was a very good shot. 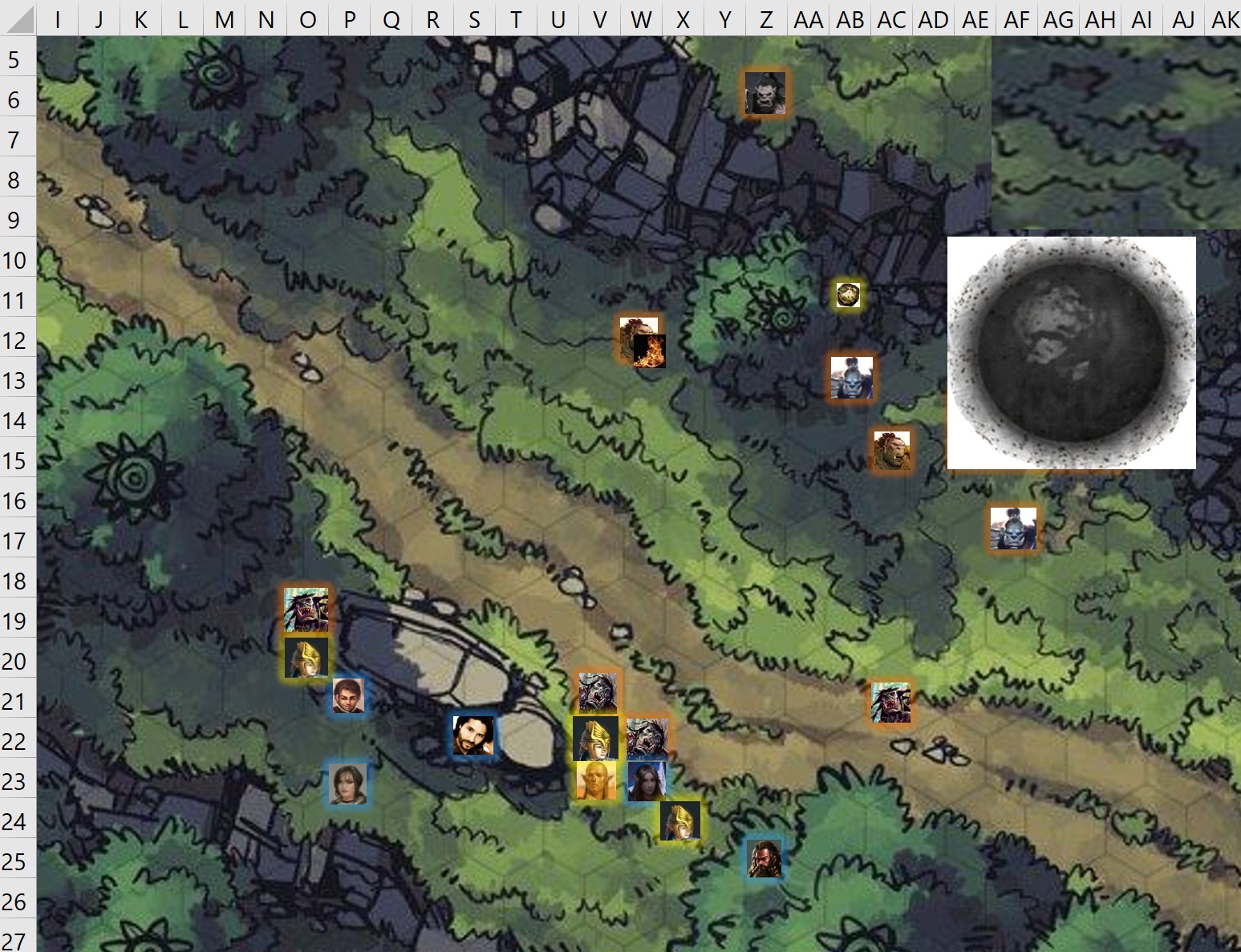 The Mourning After (Horror) (IC)
2