Okay, so I rolled the opposed Bluff check for Falen...

Okay, so Akos is pretty sure that Falen isn't telling Commander Oakfirst the whole story. Yes, there was likely a ship and a journey but there wasn't a lost treasure chest or pirates or a sea monster. For some reason, Falen doesn't want to give up details about why he has the information. Perhaps he is protecting someone he cares about or simply trusts. An old friend or a family member, maybe? Akos is fairly certain that Falen isn't protecting Phelix or any of his cronies.

Akos is also certain that Falen is telling the truth about the Dusk being in Bluffside, or at the very least, Falen believes 100% that the Dusk are in Bluffside and it has the half-hobgoblin very worried. More than likely the Dusk are after him for what he knows about them and about Phelix Del Cannitha. Akos can also sense that Falen does believe that Waldo leads the Dusk.

The Loremaster doesn't think that Falen is passing along a secret message to someone else on the street (such as the nobleman or one of the guards), but Akos can't tell if Falen has been dominated or if a geas has been placed on him. He's definitely not under the influence of a charm person spell.

Falen might be able to figure out that Akos has seen through the wildest parts of his Bluff to Commander Oakfirst. It requires a Sense Motive check as a Hunch (DC 20).

So, he has no idea that Akos has seen through his exaggerated story. Akos fey heritage makes him hard for Falen to read.
--------------
BTW,
I was planning on writing my next reply before I go to physio today, but I've run out of time. Had to do laundry and run the dishwasher. I will see how I feel after physio and a trip to the grocery store, and if I'm up for it, I'll post later on in the afternoon or late tonight.

New reply is up. Heading to bed.

Damania Hollingsworth: The wife of the deceased Lord Mayor, Horatio Hollingsworth. She is wanted for questioning regarding his murder and remains the No. 1 suspect.

What do we think about this? was she replaced at some point with a doppelganger and simply used as a scapegoat now?
What does Akos know of the woman? Was she into the politics and out for personal power?

The first two room under the Gate of Scales...

The partially-obscured white square shows where the hole is located in the guard post 20 feet above the PCs. Tuck can see with his darkvision that the central part of the floor in the northern chamber is made out of metal. He can't really see the corner columns in that room, but I figured I'd show them anyway.

Added statues to the maps. Sorry about that.

Is there any way to re-light the torch? Or did I ruin it?

Tellerian Hawke said:
Is there any way to re-light the torch? Or did I ruin it?
Click to expand...

I'm going to wait until tomorrow to post again. I need to stop staying up past 2 A.M. writing posts.

New post added earlier in the evening. I'm done for the day. Time to sleep soon.

Only Custodio and Falen have yet to descend into the small room. There isn't any room for them at this point. Well, there could be but it would be even more cramped and uncomfortable.

Does anyone have any reservations about Tim advancing a bit? The purpose is twofold: first, to see whether or not the statues will animate when Tim draws close, and second, to give everyone else a bit more room.
I was thinking about having Tim advance to the position shown below. Thoughts? 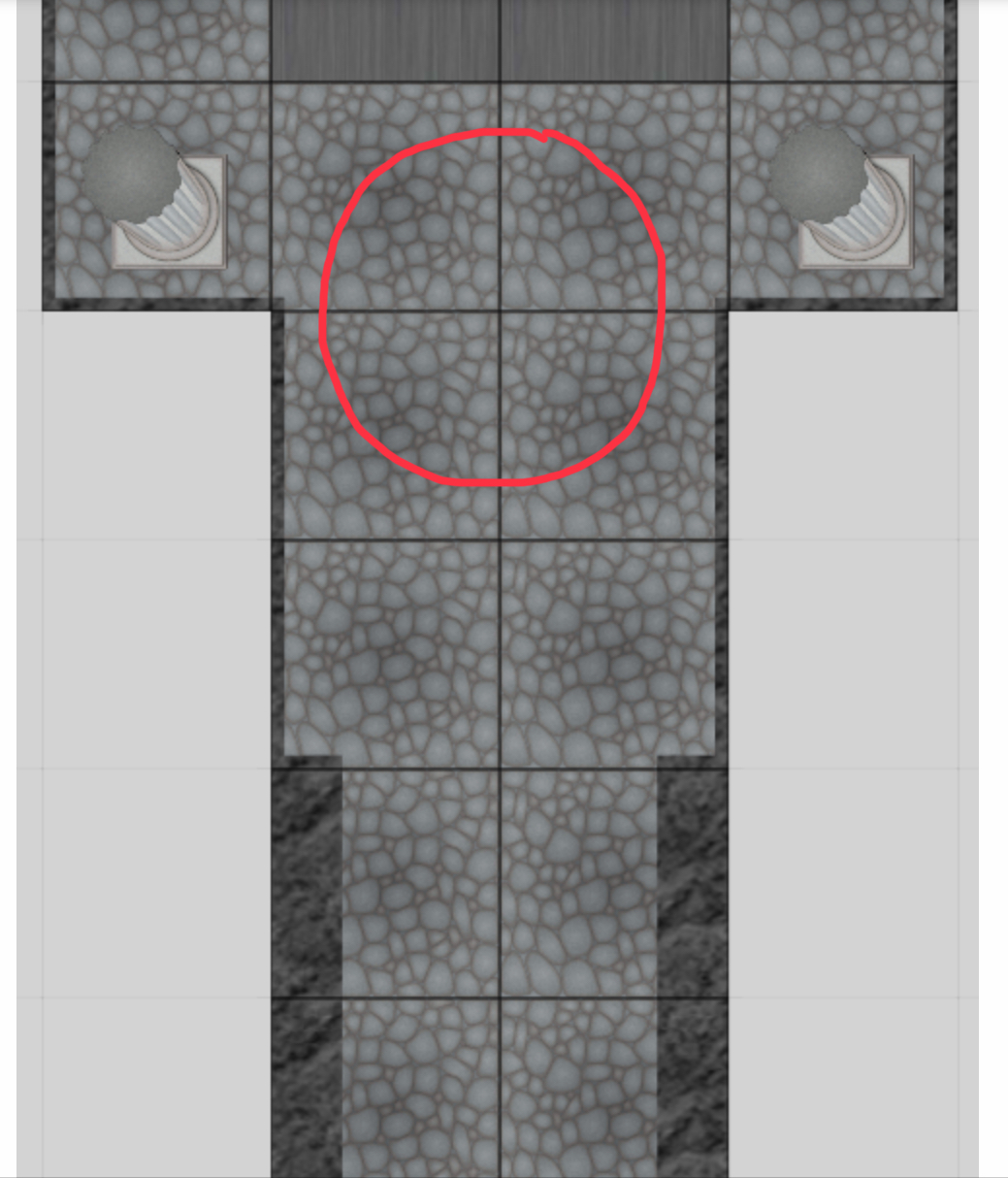 In some cases, you may have to squeeze into or through an area that isn’t as wide as the space you take up. You can squeeze through or into a space that is at least half as wide as your normal space. Each move into or through a narrow space counts as if it were 2 squares, and while squeezed in a narrow space you take a –4 penalty on attack rolls and a –4 penalty to AC.

When a Large creature (which normally takes up four squares) squeezes into a space that’s one square wide, the creature’s miniature figure occupies two squares, centered on the line between the two squares. For a bigger creature, center the creature likewise in the area it squeezes into.

A creature can squeeze past an opponent while moving but it can’t end its movement in an occupied square.

Tellerian Hawke said:
Does anyone have any reservations about Tim advancing a bit? The purpose is twofold: first, to see whether or not the statues will animate when Tim draws close, and second, to give everyone else a bit more room.
I was thinking about having Tim advance to the position shown below. Thoughts?

Go ahead. if the enemy behind Tucks door really is vermin type, it will not come after us. And you may need the space for fighting

@JustinCase Is the door with the (possible) giant spider the one directly to our South? Or is somewhere else? I am confused.

Tellerian Hawke said:
@JustinCase Is the door with the (possible) giant spider the one directly to our South? Or is somewhere else? I am confused.
Click to expand...

@Knightfall Oh ok, those doors were hard to see, but I see 'em now. Related topic: Do you agree with my analysis that the narrow hallway is roughly 1.5 squares wide, as opposed to the normal hallway width of 2 squares? (See spoiler for picture) 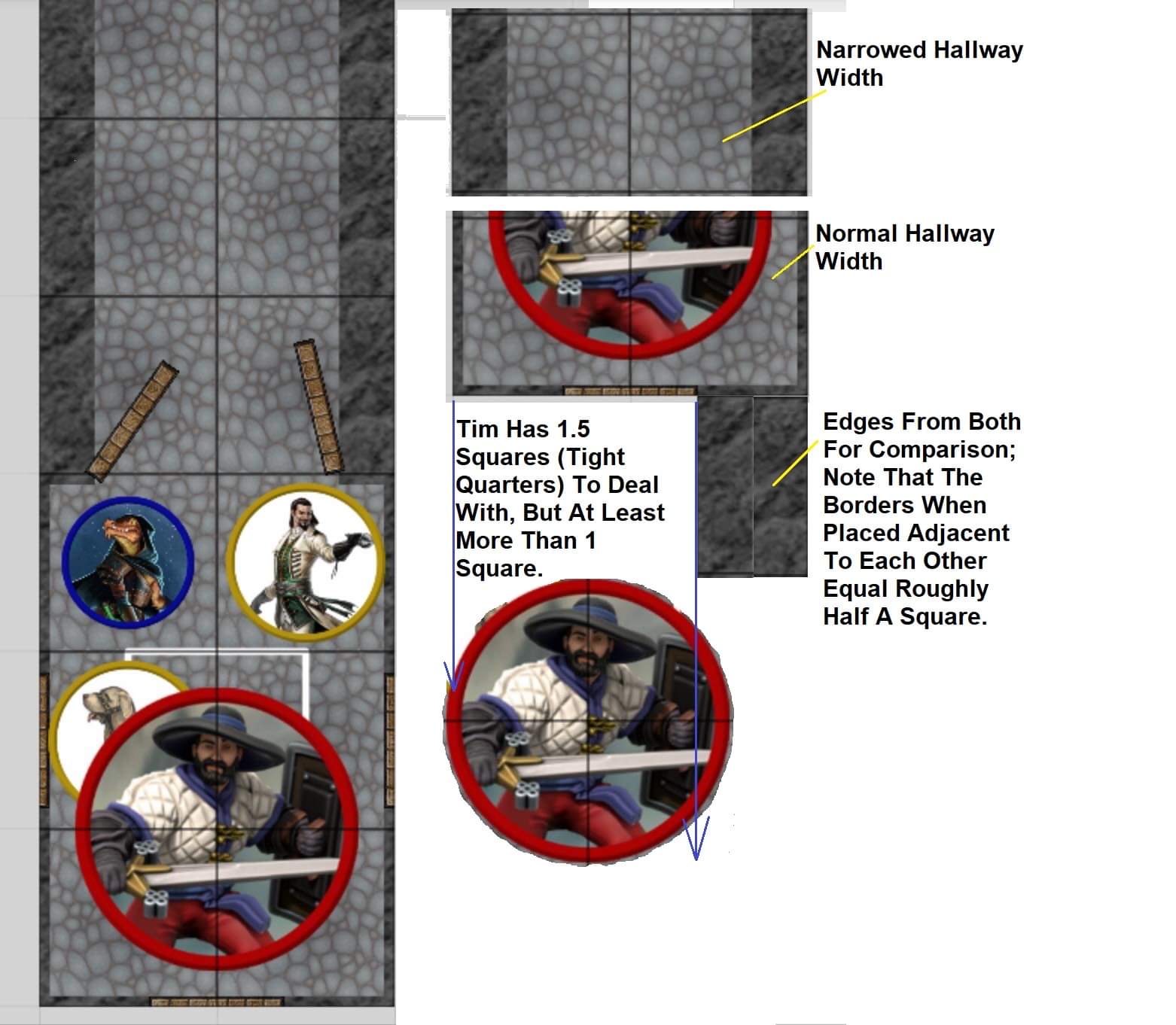