Publisher
When I learned that I can improve and revise the PoDs of the two previous MMEs, I made a promise to myself that I will go back and improve them if the pre-PoD Monster Manual Expanded III hits a milestone. I did and now I'm making it official.
I will be working on their 2nd edition versions, which will include new covers, artwork, layout, and updated statblocks to reflect current WoTC standards. I'm not replacing all the artwork though, just the ones that need replacement. Don't expect the PoD of these 2nd editions to be available until probably the 1st-2nd quarter of 2022. The PoDs of the current 1st editions will be available only until the end of October. After that, they will be both deactivated.
I know you have many questions. I'm not going to answer them yet though. Just pose them and I'll come up with a comprehensive FAQ sometime next week! 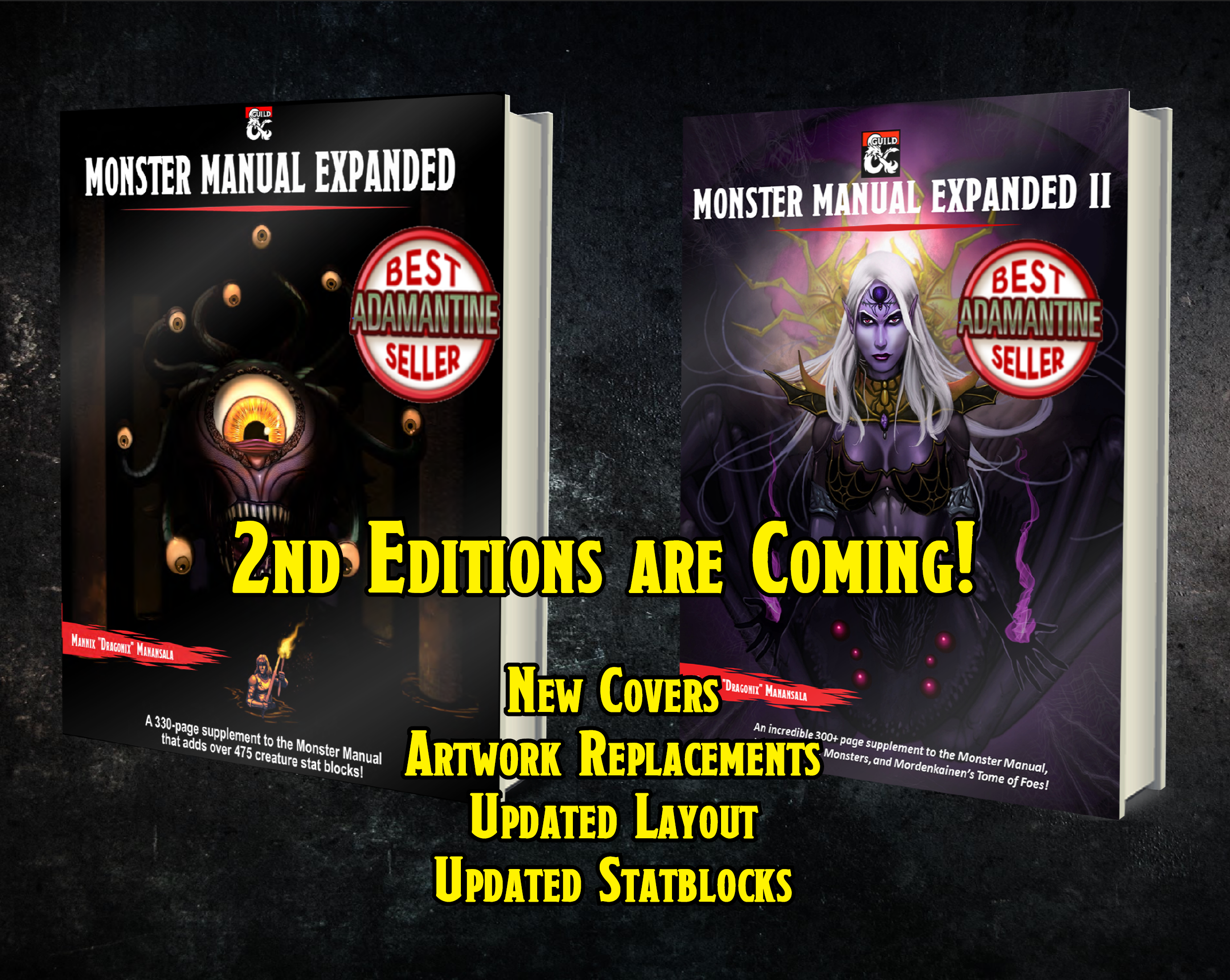 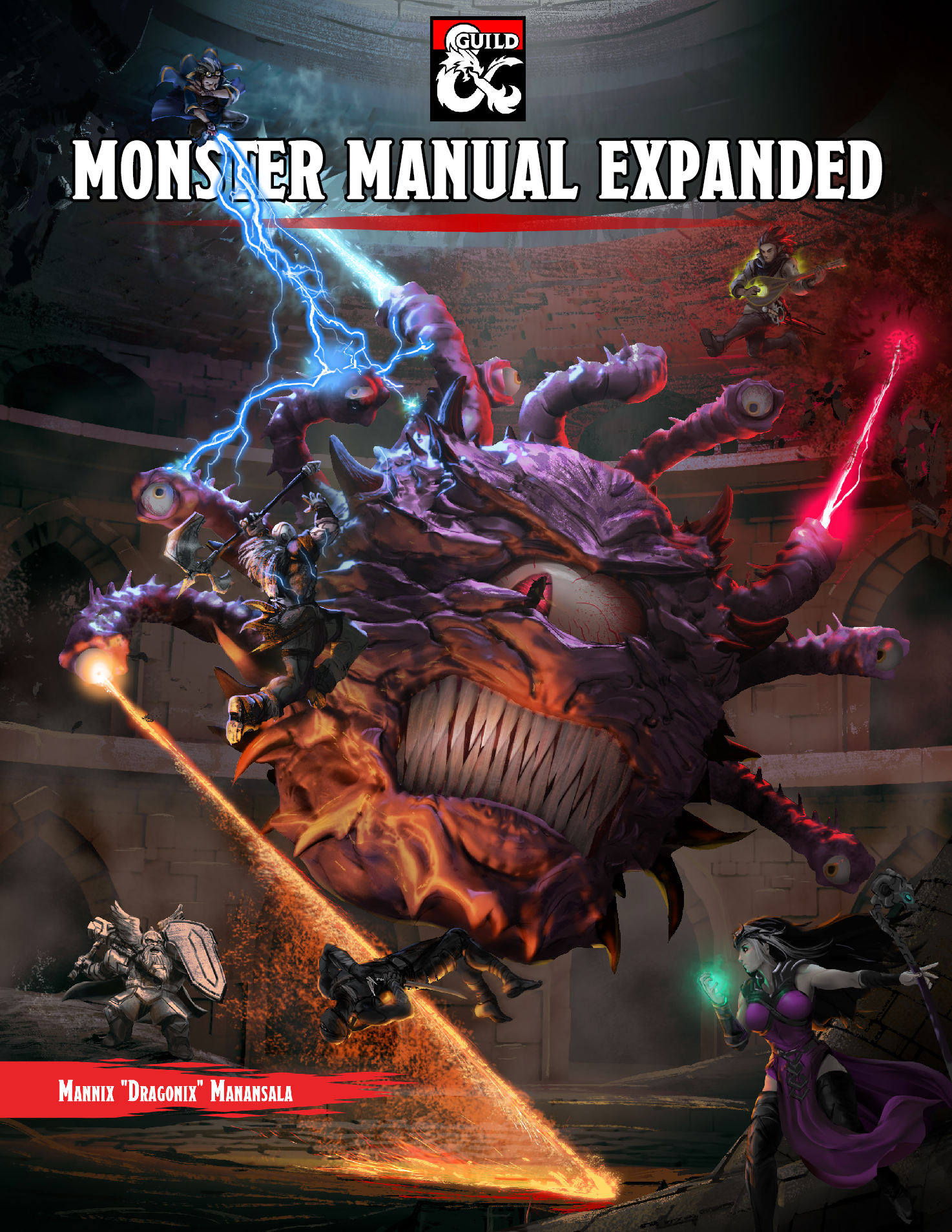 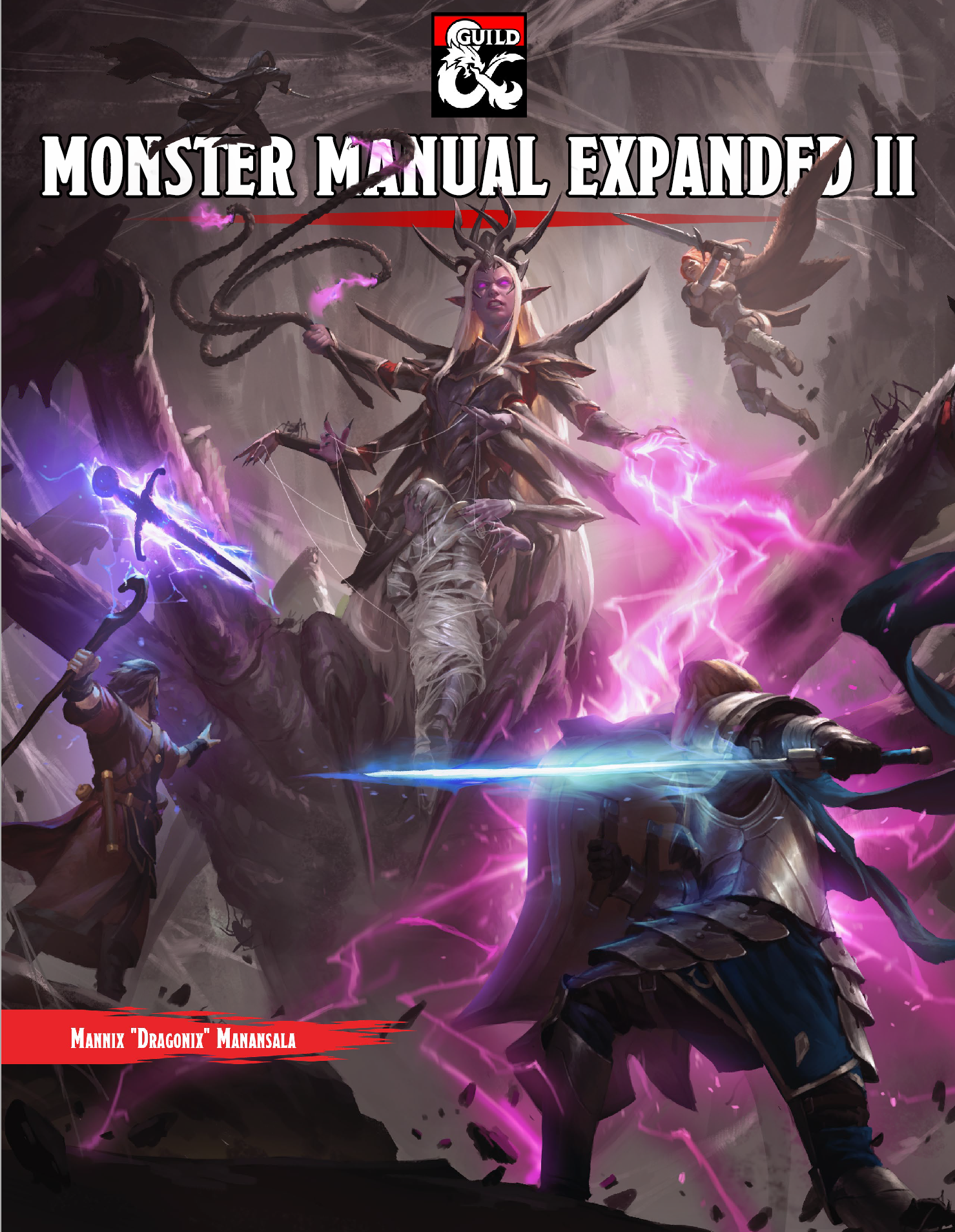 2. Will the Second Edition copies become new DM’s Guild products that we need to repurchase?
For PDFs, no. These will be the same Monster Manual Expanded I and II copies you’ve already purchased. When the Second Editions are released, you only need to download them if you’ve already purchased the previous versions.
For Print-on-Demand/Hardcovers (PoD/HC), yes. You will have to purchase them if you wish to have a second edition copy.

3. Why did you decide to do a Second Edition?
When I learned that I could update the Print-on-Demand/Hardcovers, I could have simply fixed the errors/typos and upload that version and be done with it. However, I felt that this was an opportunity to improve the pdf and the hardcovers. I also felt that, with the success of the MME books, I owed it to you to try and improve the previous books by spending more on commissioned art pieces and give the content the polish you’ve seen in MME III. Obviously, this greatly benefits everyone who already own the PDFs as they are essentially getting free upgrades.

5. Will the Second Editions cost more they are released?
Yes, the Second Edition PDFs price will increase to $24.99 (up from $19.99). Again, if you already own the PDF, this will have no effect on you. Now if you still don’t own the PDF, then I suggest you purchase them now while they are still only priced at $19.99.
However, the PoD/HC versions will still have the same base price of $19.99 plus PoD/HC cost. Please be aware though that I have no control of the PoD/HC costing as this is set by DM’s Guild.

6. Why increase the price of the PDF Second Edition?
The price increase reflects the significant costs made to upgrade the PDF. Earnings from future sales will cover Second Edition upgrade costs (payments made to professional WoTC-level artists, editors, etc.).

7. I’ve already purchased a hardcover; can I get a discount or replacement?
Unfortunately, no you can’t. However, the Second Editions will not be arriving until late 1st or 2nd quarter of next year. That is still a good 6+ months before they become available. I understand that it leaves a bitter taste if you’ve recently purchased the book, and I’m sorry. But that is why I am making this announcement as early as possible with the new editions still a long way off.
You don’t have to buy the Second Edition hardcovers anymore as the first editions are still very good products as is. But if you decide to for any reason (such as replacing a badly worn-out MME), then purchasing the second edition hardcover would be worth it since you are getting a vastly improved product.

8. Are the first edition Print-on-Demand/Hardcovers still available?
Yes, but only until the end of October, 2021. After that, they will be deactivated until the second edition PoDs/HCs become available.

9. What are the significant or substantial changes being made in the Second Edition?

10. What kind of layout improvements will there be?
Streamlining, cleaning, and polishing of the layout as seen in the layout Monster Manual Expanded III

11. What will be the artwork improvements?

13. What kind of statblock improvements will be made?
14. What tables will be added?
Tables that show creatures by CR, environment, etc. as seen at the end of MME III.

Nice! Approximately how much new art will there be?

And a fourth one is on the way IIRC.

Will the current PDFs be updated or will these be treated as separate titles?

I have the same question as Rabulias but for Fantasy Grounds.

Rabulias said:
Will the current PDFs be updated or will these be treated as separate titles?
Click to expand...

It will be the same PDFs. If you've already purchased the PDF, then you just have to redownload them once the 2nd editions are out. The hardcovers, however, have to be repurchased. It's still going to be a long wait though as it will take at least 5-6 months before the 2nd ed MME1 hardcover/PoD will become available.

Dax Doomslayer said:
I have the same question as Rabulias but for Fantasy Grounds.
Click to expand...

Demetrios1453 said:
Nice! Approximately how much new art will there be?
Click to expand...

Too early to tell but it's if I'll guess probably around 30-40%. I'm only going to replace the pixelated/poor stock art and add artwork for creature groups that don't have stock art.

Congratulations on reaching your milestone with MME3!

What changes in the statblock? I know Proficiency Bonus is in the newer ones, but what else?

Presumably the new alignment guidelines, where "Typically" will be added to most alignments (maybe all, but fiends and celestials might be alignment locked - I guess we'll have to see as books are released on this), and "Any alignment" will be the default fo many humanoid creatures.

Demetrios1453 said:
Presumably the new alignment guidelines, where "Typically" will be added to most alignments (maybe all, but fiends and celestials might be alignment locked - I guess we'll have to see as books are released on this), and "Any alignment" will be the default fo many humanoid creatures.
Click to expand...


These plus the new Multiattack rephrasing for those with multiple claw attacks (when a creature attacks 3x with its bite and claw, you no longer can't say attacks three times: one with its bite and two with its claws; it needs to be stated as makes one bite attack and two claw attacks, so as not to make it confusing for creatures that have a Claw attack and those with Claws attacks), Capitalization of Bite/Claw/Weapon attacks, etc., Bonus Actions category, Spells moved into Actions, etc.

I'm not the messiah, I'm just a very naughty boy!

I hope that the new WoTC sourcebook on dragons doesn't go too contrary to your well designed Dragons (Brown, Purple, Grey, etc) in the MME series.

IDK, I like different takes on the same monster. I actually wish the MME1 dragons where more different from the WotC versions.


Thanks! But we'll see. Hopefully, I don't have to work too much to ensure the MME3 dragons are aligned with the latest versions.

Happy to hear that MME3 met your milestone! It's a great book and I can't wait to have the physical copy. I look forward to seeing the updates to the existing books.

Publisher
Monster Manual Expanded 2nd Edition Art Previews #1. As announced last month, I'll be updating MME1 with new art and statblocks. Every Thursday starting today I'll be sharing an artwork. Kicking it off is one that deserves their very own new artwork - the Aarakocras! 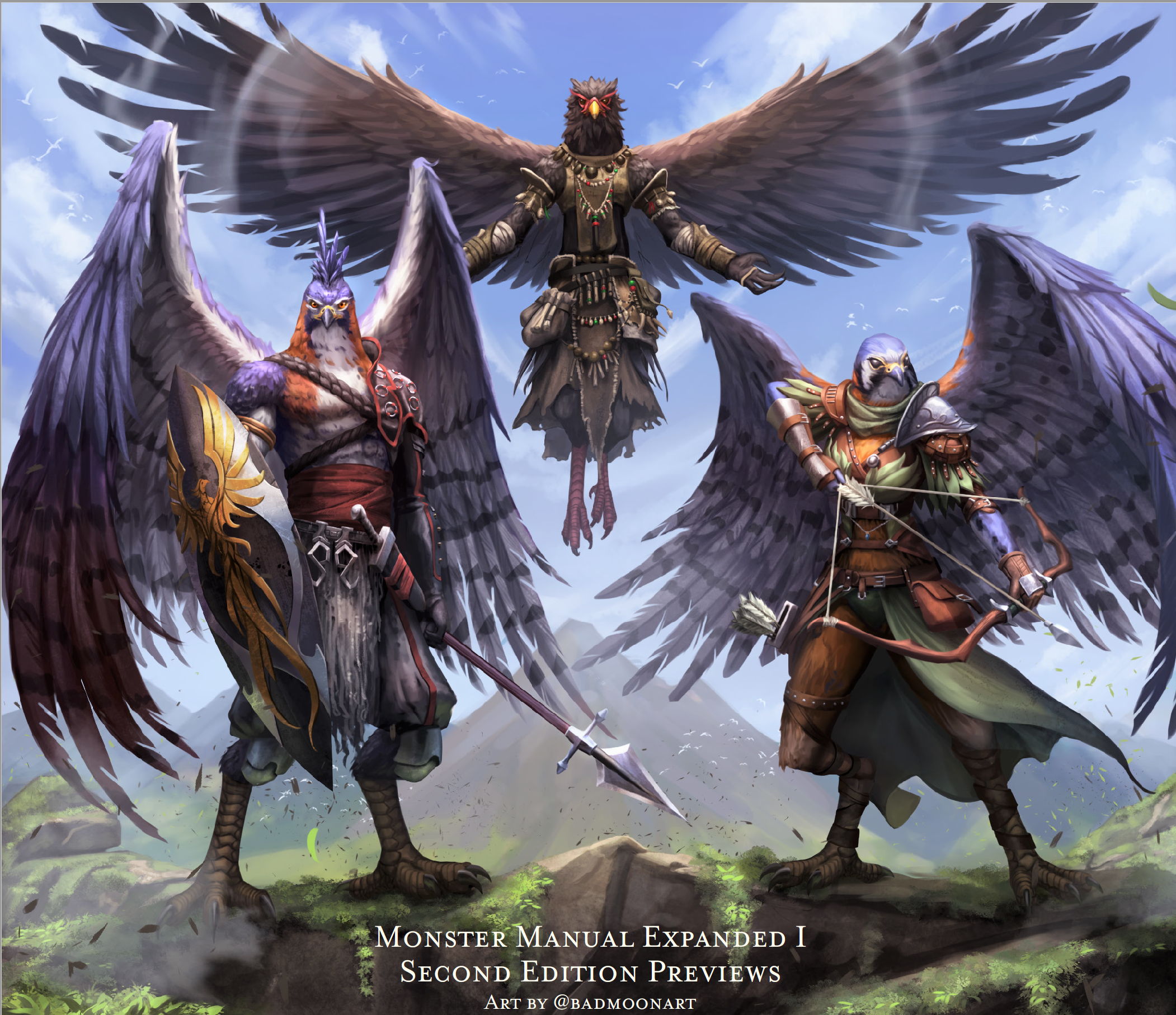 First time I've ever wanted to play an Aarakocra... just so I can use one of those as my character!