Retreater said:
Right, but a CR 21 creature in 5e is supposed to be a challenge to characters of nearly peak abilities. And granted it's one ability, so that's all I'm able to compare it to.
Click to expand...

Retreater said:
It's a little underwhelming when compared to what even low level PF2 monsters can do ... especially if I'm reading that correctly and it's a CR 21 monster.
Click to expand...

PF2e monsters benefit from a complete different system that 5e monsters can't. They get +level and +10 crits. Those two together make then hit very hard. Neither of those exist in 5e. WotC shouldn't go about changing that now to make their monsters tougher, instead what you have to do is understand what that CR means for your group and adjust accordingly.

Now, WotC could give some advice on this (like if you have more than 4 PCs add 1 HP per CR for each PC above 4, or add +1 to AC and to hit bonus for each tier above 1st if you use magic items, etc.

Motorskills said:
If you have three Legendary Actions, you spend two-thirds of that resource performing the bigger trick.
Click to expand...

The point is that these are not Legendary Actions, they are Mythic Actions. Though it appears from this preview to use the same mechanic set up as Legendary Actions, I personally think it would be odd if that is really the case. We will know soon!

I hear yah about the math, but there is also this...

When putting together an encounter or adventure, especially at lower levels, exercise caution when using monsters whose challenge rating is higher than the party’s average level. Such a creature might deal enough damage with a single action to take out adventurers of a lower level. For example, an ogre has a challenge rating of 2, but it can kill a 1st-level wizard with a single blow.
Click to expand...

So you would be using not only a CR higher than the parties' level, it would be nearly twice?

Now, I know you have put a lot of work into high level stuff, so I am willing to be the one to conceed, but I would like to hear your thoughts?

Supporter
I don't really think challenge rating scales precisely at a 1:1 ratio. The power level of the characters certainly doesn't IMO. It;s also often the case that single monsters at a given CR are less of an issue than multiple monsters totaling that same CR. The big bags of hit points don't stack up very well in many cases.

Supporter
I just remember reading that CR was basically a "you must be this high to ride" setting, and to be careful about creatures higher than the average party level. 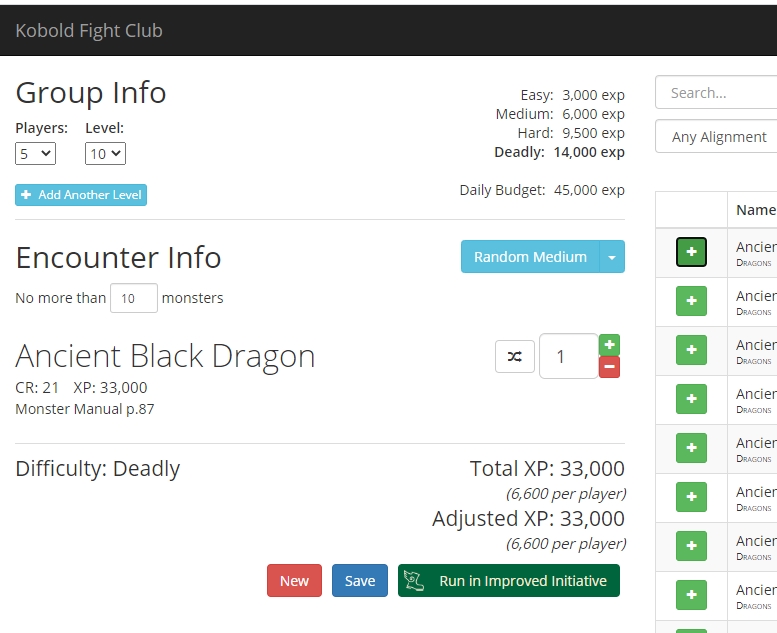 Supporter
The truth is its an imperfect gauge to begin with, and doesn't get better at higher levels. There's a ton of variation baked in based on classes, builds, synergy and feat use that make the balancing act a lot more complicated at higher levels.

The secret is that the House always wins in the long eunt, and the game is set up for the players to be the House.

Mistwell said:
But why are you even comparing it to an entirely different game? I mean, would you compare it to GURPS Fantasy or Savage Worlds or Torchbearer or 13th Age? It just seems such an odd thing to do, particularly from such a brief look.

That said, if it's just that PF2 is on your mind recently from working with it, I can totally understand that.

You've got it! Trying to wrap my mind around PF2 and its power level is kinda skewing my perceptions of 5e.

Normally, I wouldn't dream about throwing a CR 21 at less than a 17th level 5e party. But maybe I should reconsider?

And that Mythic Actions simply use up more than 1 of these actions.

Interesting. I’m wondering if “costs 2 actions” means that a Mythic action takes multiple turns to perform, or if monsters with Mythic actions will have some source of additional actions on their turn. Perhaps lair or legendary actions, but then again, maybe some Theros monsters just get more than one action per turn, perhaps at the cost of some resource akin to the fighter’s second wind.

dave2008 said:
I'm just the opposite. I find lair actions to be the great. For example, I just give dragons their lair actions all the time (they don't need to be in their lair). It makes each dragon feel unique (unlike their general stat block) and magical, without having to look up spells. Plus, they can always use them. I mean a red dragon can summon gysers of magma, or create an earthquake, or poisonous vapors every round not matter what.
Click to expand...

dave2008 just snapped the knob off, was easier.

I can add a custom title.

dave2008 said:
I'm just the opposite. I find lair actions to be the great. For example, I just give dragons their lair actions all the time (they don't need to be in their lair). It makes each dragon feel unique (unlike their general stat block) and magical, without having to look up spells. Plus, they can always use them. I mean a red dragon can summon gysers of magma, or create an earthquake, or poisonous vapors every round not matter what.
Click to expand...

Until reading your comment, I don't think I'd ever considered using lair actions outside of the actual lair, that would be a great way to ramp up a fight no matter the location.

Motorskills said:
If you have three Legendary Actions, you spend two-thirds of that resource performing the bigger trick.
Click to expand...

Mythic Actions are not Legendary Actions, if they were just a rename it would be very lame.

There are hints on the web that Mythic Actions are related to other properties of Mythic Creatures, in particular the "transformation" which happens to them when you drop them to 0hp, which practically means they are immediately back up but transformed into a slightly improved version of themselves. Maybe Mythic Actions are indeed additional Legendary Actions that the Mythic Creature can take only after it has reached its transformation. The preview just doesn't say.