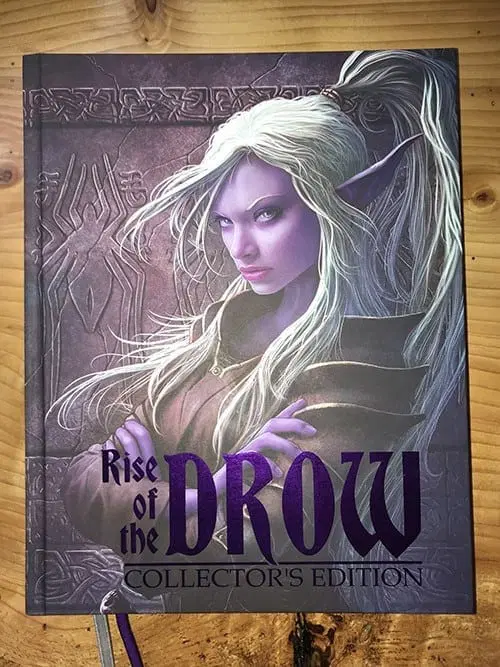 There are a lot of solid campaigns out for Fifth Edition Dungeons and Dragons. Wizards of the Coast’s strategy of one new campaign a year seems to be working for them. By focusing on campaigns that run through ten levels with just enough information to get through the storyline, the company has given new players a lot of different ways to play in campaigns. Still, there’s a market out there for Dungeon Masters who want more info, more encounters and more everything. AAW Games aimed Rise Of The Drow directly at this market with a 544 page beast of a campaign involving dark elves, the Underdark and everything else that Dungeons & Dragons players who don’t like to come to the surface enjoy. The company sent me a copy of the Collector’s Edition to check out. Upon reading, I discovered it wasn’t one book, but three.

The first book is the titular campaign written by Jonathan G. Nelson and Stephen Yeardley with development by Thomas Baumbach. It begins in the city Rybalka where the drow decide to raid the city for a magical artifact as well as take captives for sacrifices to their dark gods. The drow aren’t surprised by do-gooder heroes rushing to save the innocents; they’re expecting them. A surviving prisoner points them to a besieged dwarven city that’s been taken by the drow. There, they find an entry into the Underdark and the drow city where the armies are growing to spill out and conquer above ground once and for all.

Each of these chapters is well organized. The layout of this book mimics the Monte Cook style of two columns of text with a third for sidebars and reference. I find this style extremely useful for navigating a big tome like this. It lets me slide forward to monster stat blocks, check out a location reference and be back before the next player’s initiative turn is up. These side bars include the general progression of scenes, much like the adventure flowcharts in the latest official releases. This book contains a lot of information but its general organization never made it feel like finding a tidbit was out of my reach.

Each chapter also comes with battle maps for a variety of encounters. This adventure path was also developed for Pathfinder and the amount of encounters shows. The Fifth Edition version includes them all more as a menu for Dungeon Masters to pick and choose which ones suit their players the best, along with advice on how to modify them for pacing and focus on the PCs. They feel much more manageable and modular in size compared to the usual protracted dungeon crawls seen in D&D.

The second book dives into the setting of Rise Of The Drow. The book details the main cities seen in the campaign and fleshes them out for use as side quest locations as well as spin-offs once the main campaign is complete. There’s a Viking/Land of the Midnight Sun feel to the main setting that fits in well with the dwarf cities and drow strongholds that feature into the campaign. These places can be moved to whatever the Dungeon Master prefers but keeping them together in a dark, wintry area seems like a good thematic choice. It seems like it would be a good fit for hooking fans of games like Skyrim or The Witcher into playing some classic Dungeons & Dragons. There’s space for the underdark to get weird, including some underworld themed artifacts and magic but Dungeon Masters looking for some very strange trips are advised to check out the sister books Underworld Races & Classes and Occult Secrets of the Underworld.

The final book is a massive bestiary that contains 200 pages of monsters. This section contains both the common monsters that appear (or at least the ones that can from the 5r OGL) and the ones unique to the adventure. I’ve seen more and more third party products put all the monsters in the back and it’s a move I applaud. I like having them all in one place and since stat blocks in the encounters are not the style of this edition, this is the next best thing than having multiple books and a tablet running D&D Beyond open. There’s only so much room behind my DM screen.

Rise Of The Drow is an excellent campaign choice for tables that want a modular campaign with great setting details where they can battle a classic D&D enemy in a weird setting.

wellis said:
This is part of that Aventyr setting of theirs, right?

I remember for Pathfinder, and 5e (I think?), they put out this amazing adventure book that detailed a town and involved tracking down a kidnapped princess. And like every business & NPC in the town was a reference to some sort of fairy tail.

It was all very Snow White and fairy tail stuff, but like D&D'd and pretty cool.

Oooh do you remember what the adventure was called?

Weiley31 said:
Oooh do you remember what the adventure was called?
Click to expand...

It was for Pathfinder, and here was a review on it by Endzeitgeist. Called Snow White.

Sadly it looks like it hasn't come out for 5e.

EDIT: Seems like Amazon offers a cheaper deal for it.

This review inspired me to check out this book and the website. I decided to buy the book, and wow is it pretty great! I can't say I've gone through and read the 500+ pages yet, but the quality of everything has been great so far

D&D 5E This Potbellied Kobold Is Full of Surprises

B
Review of the Dungeon Master's Screen Dungeon Kit