D&D General what is the relationship between Brutes and Rangers ?

well, easy : it is the Barbarian

What is a Brute anyway?

Is this a Brute? 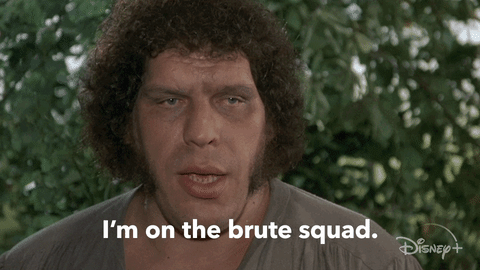 It depends on what kind "ranger" we are talking about.

The army equivalent of navy seals?

DND_Reborn said:
What is a Brute anyway?

No, he is the brute squad.

Yaarel said:
It depends on what kind "ranger" we are talking about.

The army equivalent of navy seals?

Then rangers are tough intelligent stealthy brutes.
Click to expand...

the Ranger ?
what about a wilderness policeman, or a forester ?

le Redoutable said:
the Ranger ?
what about a wilderness policeman, or a forester ?
Click to expand...

The forest ranger is a combination of environmentalist and police officer. They also tend to be intelligent, as well as tough. If they are dealing with a situation where there are criminals who are poaching or smugglers or hostiles entering via the wilderness, they may even be military combatants.

Generally, I see the Ranger as something like Constitution and Intelligence. They have Strength and are Athletic, but they use it for mobility, not heavy armor.

They differ from the Barbarian because the Ranger has less to do with rage-fighting, and more to do with smarts.

why not Wisdom ?
no link upon Wis and Nature ?

perhaps you use Ranger = Hunter;
the Hunter would use Con+Int ( in traditional D&D, because my view is that Con = Energy, which is a stat for the five spell-casters ( Bard, Cleric, Druid, Elementalist, and Illlusionist ) )

le Redoutable said:
why not Wisdom ?
no link upon Wis and Nature ?
Click to expand...

Rangers feel intelligent, their training, their surveillance, their strategy, their tactics, and for forest rangers, their science.

We already have a split between "Survival" and "Nature". This redundancy is part of the six abilities themselves being redundant and unclear.

To try make the skills different from each other, I use "Survival" for navigation, and I use "Nature" for protoscience, including earth, water, air, fire (sunlight), and plants as a kind of element. Then I use "Animal Handling" for animals.

For me, "Wisdom" is willpower. And "Perception" is something else.

I , totally , disagree with your Nature = Int;
in ancient times there was a spell ( a druidic spell ) which was called Commune with Nature;
obviously Druids don't rely on Int ( wtf? )
then, what to say about Survival Instinct ?
whatever, in Animal Handling there is the term Handle;
it isn't the same term as animal friendship;
so it would fall under general Handle, i.e. either a Str or a Dex skill
( sorry to pollute your journey )

also, Wis is something like exposure, or awareness;
Wis is totally inoffensive, which is not what I have as a definition for Willpower

Because Cleric is about symbols, inspiration, community leadership, relationships, faith healing, and so on, Cleric makes more sense as Charisma.

Yaarel said:
Because Cleric is about symbols, inspiration, community leadership, relationships, faith healing, and so on, Cleric makes more sense as Charisma.
Click to expand...

you are speaking of Leaders;
I would just add that someone mentioned the Paladins as being Heralds;
so, who of the Cleric or the Paladin is a strong leader ?
Following my reflexion, if Cha is using Willpower, is Willpower a tool for Leadership ?

Yaarel said:
Because Cleric is about symbols, inspiration, community leadership, relationships, faith healing, and so on, Cleric makes more sense as Charisma.
Click to expand...

so, Wis is Nature while Cha is Religion ?
cool !

then ( I have plenty of ideas today ) are Orators on the way to Leaders ?

D&D 5E In a polytheistic setting, the relationship between a Cleric and a deity goes in the Ideal and Flaw section.
2

D&D General What from D&D would make a good figure??