With a loud crack, the wooden bar broke as Lunn, Grottur, and Helgrim burst into the lodge's entry hall. The two gnolls inside leaped on them immediately, biting and hacking.

Prickly Pear said:
And for Lionel's turn too...?
Click to expand...

Vairar moves back toward the door and attacks the gnoll closest to him, spiking it fully through and leaving it sheathed in potential energy preventing it from moving lest it dies on the spot.

Escella came up to the corner and peeked around it, with Lionel at her side. She fired an eldritch bolt at the hyena-worg, but the creature hightailed it, diving around the corner as he spell zipped past. She looked for the gnoll she had struck earlier, but he was out of sight, so she fired another bolt at one that was hiding behind a tree, singing it.

Lionel spotted the same gnoll, and he fired his crossbow as it fired a longbow back at them. The gnoll was struck injured, and it ducked out of sight behind the walls of the lodge. Its arrow struck harmlessly off of the stonework at the corner as Lionel and Escella took cover.

Vairar moved through the front doors, and he thrust his pike into a gnoll guard, driving him away from attacking Lunn. The gnoll pushed forward, and Vairar's magic energy exploded, dropping the gnoll to the ground.

Back outside, three gnolls began to charge forward through the gap between the two buildings, going under the second-floor passover. They yipped and hollered as they ran, and the one following began to twist and grow, turning into a large snarling monstrous version of itself.

During all this, the first gnoll (the one that Escella had looked for) had climbed up a tree and onto the roof. Near the Phylund Lith, the cornerstone of the building, it fired a longbow down among the group huddled near the front entrance, but the arrow struck the ground without finding a target. 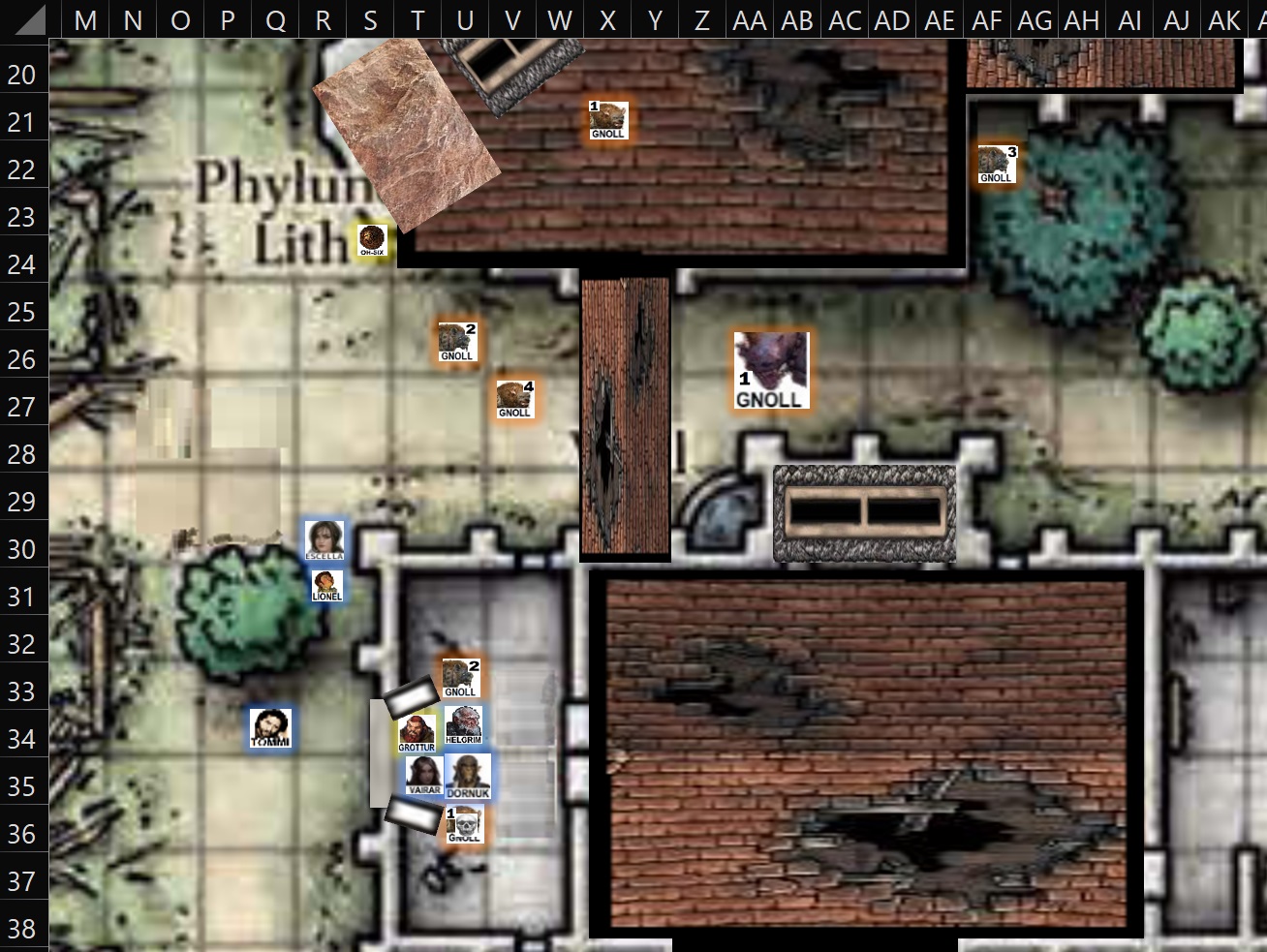 Lionel observed the approaching gnolls and thought he saw an opening. He took a shot at the closest approaching gnoll and then retreated back to the main doors. I don't want to be caught out here with all the gnolls charging in, he thought to himself. Come, Escella, he called out. Let's get back to the others.

"We don't want to be assaulted on two fronts," Escella says again. She sends two eldritch blasts into the nearest archer (G4). It manages to avoid one of them. She retreats with Lionel inside the door. (V36)

Supporter
Tommi Whistles for Oh-Six, and they both enter the building, squeezing past their comrades and staying out of the way.

Vairar moves deeper into the room to make space for still incoming allies. Leaving space next to the gnoll to Lunn, he stabs at the remaining gnoll from afar, still threatening with his booming weapon. Unfortunately, the gnoll followed him with its eyes and as he stabbed it sidestepped, avoiding (if barely) the tip of the weapon.

Lunn starts forward, stops as he feels movement behind him, realizes it is only Vairar, starts again, startles as the pike flashes next to him and he fails to take swing at the gnoll, almost knocking himself over with all the twisting as he moved.

Things were not going well for the Daggerfordians. The gnoll on the opposite buiding's roof, stood by the Phylund lith and howled, high-pitched and loud. It would certianly awaken any gnolls who were not already alerted. Still, the small group pressed on, moving into the lodge's entry hall.

Though there was only one gnoll guard inside, he frustrated their efforts to put him down, leaping from side-to-side. He avoided Vairar's pike while using Lunn's momentum against him, and used the open door to ward off some of the dwarves' axe-blows. Though it was only a matter of time before they finished him, the gnoll laughed through pointed teeth, apparently fearless against overwhelming odds.

As Escella, Lionel, and Tommi retreated into the foyer, the archers gave chase. Bounding past them, Lionel was leaped upon by an oversized, mutated gnoll, who ragdolled the unfortunate halfling, who could only go limp to avoid the worst of the biting and thrashing. The archers fired over this mess, into the entry hall, and got Grottur in the shoulder before the dwarf was able to spin and defend. Escella too, was pierced, though not badly, by arrows.

Oh-Six buzzed next to Tommi in the corner of the room and said, "Calculate tactical/safety recommendation: Close the doors!" 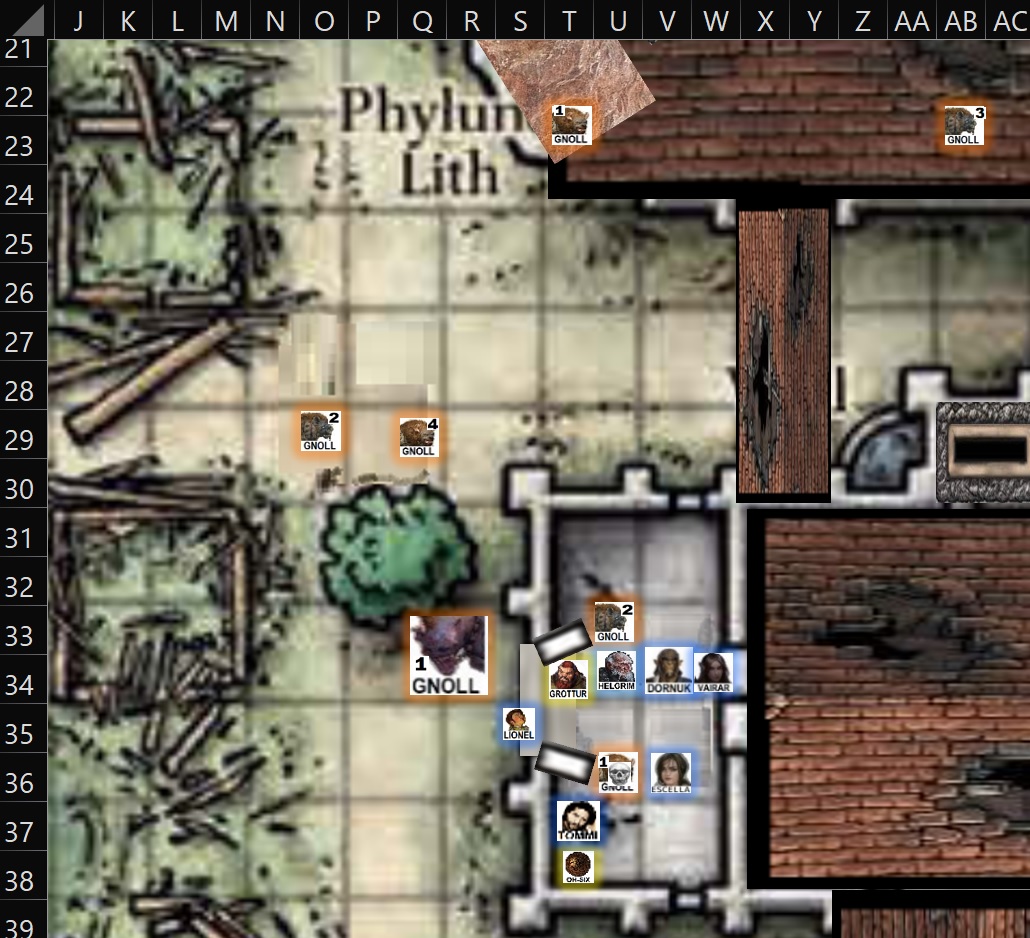 Supporter
Round 4.
Tommi will close one of the doors once Lionel is inside.

Escella casts a Chaos bolt (3rd level) at the big gnoll. It hits. She then gets behind Tommi near the wall (T38).

"I'll finish here, go, help Lionel!"
elf priest shouts before stabbing his pike deep into the jumping gnoll. The pike empties spells charge into the already limp body for good measure, muffled thump is heard as it vaporizes its internal support. Gnoll guard slides of the pike in a boneless heap.

"Not yet, Lionel, hold on!" his encouragement is laced with healing words of magic as some of the wounds on the halfling close.
He follows the group to block entrance into the room and provide support to those trying to close the door.

"The door is broken, how will that help us?!" shouts the warrior.
"Let's just kill the big one!" but his combat (un)luck continues as he swings too slow, careful not the carve into Lionel, but he tries to hook the axe behind the halfling and pull him out of the big brutes grasp.

OOC: rolled athletics, but ignore if you feel it shouldn't be bonus action, missed the attack

That beast came up quickly on Lionel and he got badly hurt by the savage attacks. Lunn's soothing words helped and Lionel could focus on the oversized gnoll. The drew his shortsword an stabbed at the gnoll before retreating inside the manor.

"Close them durn doors," Helgrim snaps, as the ancient dwarf steps forward to prevent the monstrous gnoll from coming after Lionel. With an ease honed through years and years of experience, he moves to the creature quickly and rapidly slashes with his battleaxe twice, each drawing blood.

Then, satisfied, he steps back in time for the doors to close between them and the enemies outside, helping to hold them closed if need be.

Vairar nods as everyone retreats behind the door line. "Come, Lunn, back!" He stabs at the big gnoll with by-now-familiar rumbling sonic attack, keeping the big gnoll (hopefully) from following them inside