Dandin called to Tommi, but his friend was already loading a stone. Tommi whipped the stone, straight and true for the orc shaman, but it pinged off of Sir Darfin's invisible barrier. Tommi was embarrassed, and he pushed off into the bushes to work his way toward the sniper, as the halfling had instructed.

Dandin stabbed the rather larger orog in the leg, but the big brute just grunted and raised an axe. As the axe fell on him, Dandin tried to parry, but the blows where far stronger than he imagined, and he was driven nearly to the ground.

Escella had finally managed to strike the sniper with her strange eldritch energy. She wondered why it had failed her so much here - it felt as if it were weakened, as if the power within her was weakened by some external will. She shivered, as if she were cold, while the elf guard arched an eyebrow at her.

Vairar ran his spear through an orog, freeing Angis to heal himself and to work his way toward the other Orog. Blocked by the invisible wall, the dwarf healed himself. Vairar shouted in gutteral, fully-fluent orcish, and the Ogress, as she climbed over the invisible wall (landing with a loud thump) answered him:


"Naw, yer a traitor. We gonna gut this elf-prince like a fish, 'fore we come for you, elf-lover."
Then she rushed at Sir Darfin, clawing with her strapped-on wrist claws. Two guards stood between her and the elf-lord, but still she managed to scratch him from over their heads.

While TItus held the horses so the wagon would not lurch (they were skittish from the smell of the bear), Lionel fired the mounted crossbow over the head of the orc sniper on the ridge. He watched for a moment, and he noticed how the archer would lean out as he fired his bow. Lower next time! he thought as he reloaded the crossbow.

ORB5 buzzed around the sniper's head and suddenly let out a flash of electricity. As the orc recovered from the zap (his greasy mane fluffed out), the little construct buzzed away. The orc took aim at the fleeing thing, firing an arrow that bounced off of a magical force-shield. Cussing, the orc turned his sights back below and spotted Tommi shuffling through the underbrush below him. He took careful aim and struck the boy hard in the shoulder.

While the battle raged, the bear was left on its own. It struggled free of its collar and began to paw at the walls of the force-cage. The orc shaman was there as well, and for the moment, the two ignored each other as the shaman cast a woeful bane spell that caused a great sense of unease to fall over the field, most notably effecting Angis, Dandin, Sir Darfin, and his two guards. 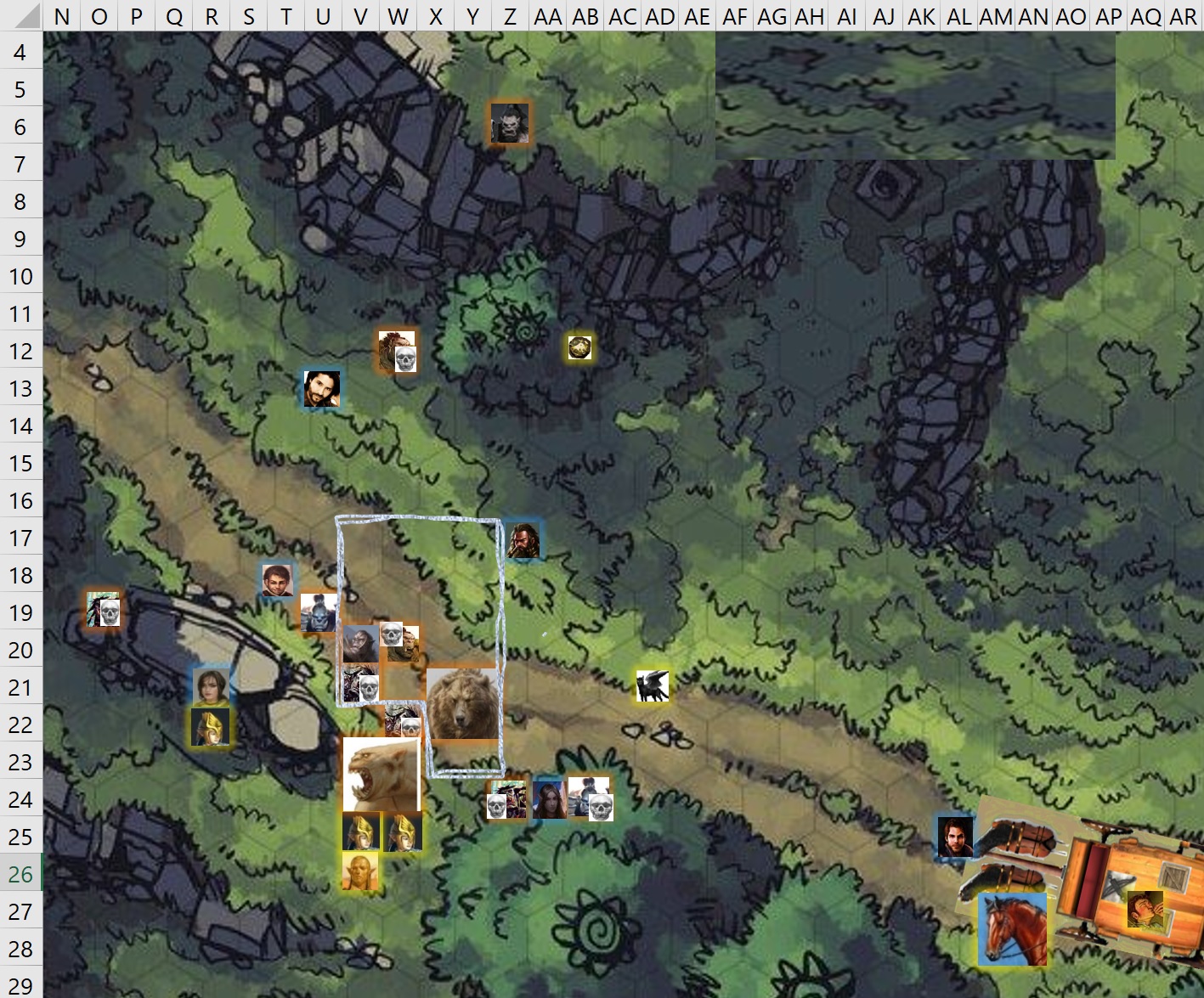 The arrow goes right through Tommi's shoulder but he is determined and not phased in the least. The pain, and the perfect, round scar, would come later.

He continues to rush to the cliffside, through the heavy undergrowth. When he feels he is within range, he launches a stone at the archer above him, but the shot goes wide, clacking uselessly against the rocks.

The young man remains light on his feet, avoiding any incoming missiles or rocks.

Dandin was suddenly reminded of a conversation he's had early on about not putting himself into a dangerous position. But now it was too late. The Orog had him isolated and in just two strikes had sent him reeling. And he could feel some new dark magic taking hold. Not knowing any better strategy for this situation, the halfling simply did what came naturally. He flicked his wrist and brought his shawm up to his lips, sounding off one last spell in hopes of removing an enemy from the equation before he himself fell. The sniper on the hill dropped like a rock.

"Don't worry about the sniper! He'll be asleep for a minute! But I could use some help here!"


Charisma Save: 1d20+5 12
Sleep Spell (2nd level): 7d8 34
Readying his reaction to use his last inspiration on cutting words against the Orog in the vain hope of not being splatted.

Escella stands and realizes the sniper is down. She sees Dandin is in trouble and casts a chaos bolt at the Orog in front of him. Fire bursts across the Orog's body and he grabs his head from the blistering pain.

FitzTheRuke said:
OrcClaw's Bane: Up to 3 creatures of your choice that you can see within 30 feet must make Charisma saving throws. Whenever a target that fails this saving throw makes an attack roll or a saving throw before the spell ends, the target must roll a d4 and subtract the number rolled from the attack roll or saving throw. Higher Levels. You can target 1 additional creature for each slot level above 1st. (OrcClaw cast as level 3 for 5 targets. Spell save dc is 12.)
Click to expand...

Vairar rushes the ogress, stabbing toward her with the spear crackling with lightning.
"Fall back!" he calls out to the guards and the elven lord. "I'll take care of her!"

With that he charges in, stabbing the spear deep into her flank and raising the bloody tip up toward her face.

"You could MAYBE have me! You'll never have the opportunity to kill others. Look around you! Run while you can BEAST!"

Reaction: Wrath of the storm: if the ogre hits Vairar in melee, she takes 16 (Destructive wrath max of 2d8) or 8 on Dex save DC 13
OR: if she moves away she takes 8 thunder damage from Booming spear
Last edited: Sep 16, 2020

Bless bonus (for save): 1d4 4 (That makes it a 16 now. Guess I had saved with the twelve anyways though. That Orc's DC's are weak!

Dandin doesn't speak orcish, he does have a tendency to ritual cast comprehend languages when he can, but I don't know if he had the chance to before setting out this time.

Angis felt the ogress’s magic settle on him, but he rallied, shrugging it off and glowering at her through the invisible force field. He continued his mad rush around the forcefield, charging right up to the orc assaulting Dandin just as it got friend by Escella.

Spells
1) 0/3 Absorb Elements, Cure Wounds, Hunter’s Mark
4/4 Boon of the Elk. Can cast Knock four times (without the loud sound) as an Action. Until he uses the last one, non-good aligned Fey count among his Favoured Enemies.

Darfin echoes the order of the mercenary.
"Fallback, toward the carriage. Luviel, stay with the girl! Vairar, good luck!"

The guards quickly comply, hunkering behind their shields and pulling away as the lord takes them further from the ogre.


Guard 1 remains next to Escella

Guards 2 and 3: Disengage
Darfin: move to AB26 (or as far as possible if there is difficult terrain)
Reaction: shield if ogre takes opportunity attack
Guards move: to AA24 and AA 26 respectively

As eager as Titus was to join the fight, he decided to stay with the horses. No good would come if they lost them to an aggressive ogre running amok. He readjusted his position to be between the line of ogre and horses.

Meanwhile, Lionel had lost sight of the sniper. Suddenly the sniper had ducked down in the undergrowth and did not put up his head again. Lionel couldn't understand why.What he did see, though, was a huge ogre climbing over the shimmering barrier and attack some guards. The guards were retreating but the ogre would surely catch up with them. Lionel adjusted the crossbow and took aim at the ogre. He spent a moment watching the ogre before firing the bolt.

Tommi slung a stone at the orc sniper, but the lad was in a lot of pain from his arrow-wound and the stone went wide. To help his friend, Dandin sent a magical lullaby that caused the archer to fall asleep, nearly slumping off of the cliff. Tommi slumped against a bush to catch his breath.

Through the hole in the rocks, Escella had a perfect view of the orog as it threatened Dandin. She struck it hard with a burst of chaos magic, and it cussed, shaking its head. Still, it raised its axe, about to bring it down on the halfling, when Dandin suggested, "Look behind you!"

The orog turned as Angis rushed foward, ready to give it a go. The axe dropped, but the dwarf was better able to stand against it.

Sir Darfin and his guards shuffled away to give Vairar room as the elf warrior-cleric pierced the ogre's side with his spear. A large quarrel zoomed between them from the wagon, narrowly missing both as the cleric and the ogress squared off. She scratched him with her wrist-claws and the cleric burst into a mess of lightning that burned the brute. She cursed at him while wiping her brow and said,


"I see whatcher are, now: A slave. A no-good slave who shud knowiz place."
In the force-cage, the bear and the claw-shaman were alone. The shaman attempted to get the bear to climb over the invisible wall, but was hasty in his actions. The bear swatted and bit at him, still annoyed at being burnt and free of the collar. The shaman was forced to retreat and to heal himself as the bear grunted obstinately.

The horses could smell the bear, and they shied, snorting. Titus wanted to get into the fight, but it was important that he held the horses to keep the wagon safe and steady while Lionel reloaded the mounted crossbow.

In the sky overhead, Morwen the winged cat and ORB5 the little round construct flew around each other in greeting before flying off in different directions. 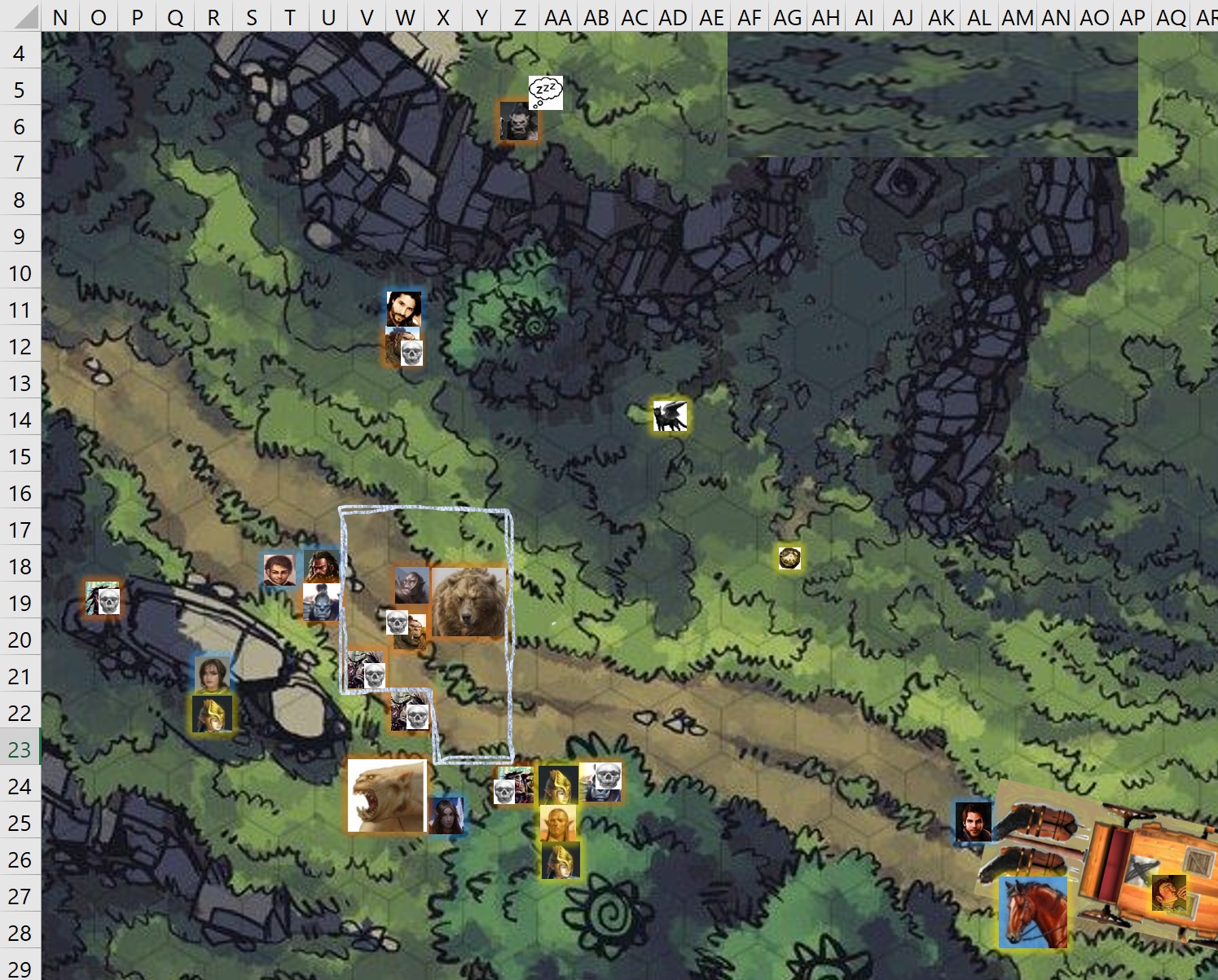 Escella's victory dance is cut short as the hulking figure of the ogre comes into view. "Crap," she says. "When does this become insanity?" She wonders as her eldritch blast flies wide of the ogre.

Tommi is frurstrated that he has been unable to help as much as he has wanted. But he is going to get that sniper, even if he doesn't know the sniper is currently asleep.

He scrambles over the rocks and makes his way to the top of the cliff.

He saw the axe coming down, Angis was coming and he pointed in a desperate attempt to distract the Orog. And it worked? The swing missed him by a hair. He couldn't believe it. Then it turned away to srike at Angis. Dandin flicked his wrist, bringing Suren's call back to it's weapon form and he trued to thrust. Unfortunately, he was in too much pain, and it foiled his attack.

Feeling slightly better, he raised his sword once more, but he couldn't think of any more witty comments.

Vairar takes the hit and sneers.
"I survived orc slavery. I was tortured, burned, maimed. But I live to see all of your kind burnt to ashes! Witness the glory of the Lady of the Winds!"
Vairar heals himself with a word.
"I can take more hits. How many can you take before you fall, mistress?! And how many times can you afford to hit me? I am an elf and proud of it. You think just because we like good living that we're soft. Well, WE ARE NOT!"
He trusts at the ogre again, but this time, in his anger, he broadcasts his intention and target too clearly and she sidesteps easily.
He grins.
"Well played, you won't get me riled up again."
"As long as yon wall is here, you're alone. And nothing you can do will bring it down since that elven lord is out of your reach. You move, I kill you. You attack, my goddess kills you. You can surrender now and live."
Sneer again.
"Slave, eh?!"