It’s finally here, folk! The IRON DM 2021 Tournament begins. Herein, seven challengers will attempt to dethrone the current champion by testing their adventure-writing skills through three grueling rounds (if they can last that long!) of intense head-to-head matches.

This year’s judges will be:

Radiating Gnome, a competitor from the early days, a well-seasoned judge, and a gnome of wisdom and renown.

Rune, a once-frequent competitor, the IRON DM of SPRING 2002, and a not-infrequent judge of tournaments past.

The tournament is set up in a single-elimination bracket style, with each match determined based on scheduling availability among the eligible contestants within the match’s tier.

Each match consists of two contestants given a single set of ingredients with which to construct a brief adventure or adventure synopsis in any game system or genre. You should waste neither time, nor words, on overly detailed stats, but you should also not assume familiarity with any given system or genre. Explain what you need to explain, and stop there!

These entries will be evaluated on their own merits and those evaluations will then be compared to determine the winner of a match, who will then proceed to the next round.

Obviously, you really want to avoid being late, especially in the first round, but life happens, and sometimes you just can't make it. In such cases, you should take the extra time (before your next threshold) to polish your entry with your new word-limit in mind. It won't be easy, but you might still win. Even if you don't win, you may at least find the judgement(s) enlightening for future IRON DM tournaments!

Entries are expected to make good use of all of the ingredients submitted. The ingredients should be creatively applied, well-integrated, and fundamentally necessary to the adventure that they are used in. This is the crux of the tournament, so don't think that maybe (for example) doing a good job with three ingredients will be enough, as long as you can craft a better adventure! I wouldn't count on it, if I were you.

Finally, each of the first-round matches will use six ingredients. After that, the list of required ingredients will get longer as the rounds progress.

All entries are to be submitted with the list of ingredients at the top and are not to be edited, once submitted. Let me repeat that last part: DO NOT EDIT YOUR POST, ONCE YOU HAVE SUBMITTED IT! Check your work before you send it in. Then check it again. We will not look favorably upon any entry that has been edited and may penalize the entry as we see fit, including, possibly, outright disqualification. Part of the challenge of IRON DM is in the development and use of discipline in editing and time-management.

Please do not expect us to follow links within your entry. You may include links for others to follow if you choose to do so, but understand that any information that is necessary to the entry must be in the actual entry. We will be reading each entry multiple times and, thus, unlikely to also be willing to go outside the entry to find context for it. More importantly, expecting outside sources to carry the load of exposition very much defeats the purpose of the word-limit.

Along those lines – If the author chooses to include a trigger warning in an entry, that warning will not count against the word limit. Such a warning is being offered as a courtesy to readers (not necessarily the judges) in a context where the author can never know who those readers will be.

Further, the kind of information conveyed is not in a form that can be used to shortcut exposition in an entry. However, if an entry does use a trigger warning to provide that kind of descriptive information, any such portion of a trigger warning will count against the word-limit.

Each of the first-round matches will have a single judge. The second- and third-round matches will have the full panel of three. As I said before, each entry will be judged on its own merits and then the two competing entries' critiques will be compared for the final judgement. In the latter rounds, the majority opinion will determine the victor. Different judges have traditionally had different processes to arrive at such outcomes – for instance, some may use a point-based grading chart, while others may prefer a more abstract analysis.

We will endeavor to be Nemmerelesque in our judgements – critical, but also fair and constructive in that criticism. It's tradition. Even so, please understand that not everybody will agree with every decision that we make – that's the nature of the game. Traditionally, trying to figure out what the judge will want to see is all part of the game (though not necessarily a recommended strategy) – and that can lead to some undesired outcomes. It can sting sometimes (believe me, I know!), but it is a game. Let's have some fun with it!

That said, those wishing to gain a little insight into the judges’ thinking will need to do a little research to do so, but the information is out there. Be warned, though! We may have changed our thinking on some of these things within the last couple of decades!

All matches in the first round will have a 24 hour time-limit! All matches in the first round will have six ingredients, all of which are to be used in each entry. Entries in these matches will have a 750 word limit, not including the title and ingredients list. Any descriptions or definitions of ingredients included with the list will count against the limit! That may not seem like a lot, but I assure you, it's even less than you think! Contestants who win their Round 1 matches will proceed to Round 2.

The third round match will also have a 48 hour time-limit. This match will use eight ingredients, all of which are to be used in each entry. Entries in this match will have a 2000 word limit, not including the title and ingredients list. Any descriptions or definitions of ingredients included with the list will count against the limit! The contestant who wins this match will become the IRON DM 2021!
Scheduling, Discussing, and Spectating:

To keep down the clutter, scheduling for all matches will take place elsewhere, in the scheduling thread.

This tournament thread will be used to list the ingredients and the judgements for each match, as well as the entries, themselves. Commentary and good-natured trash-talking will also be welcome in this thread, but, please, if you are commenting on an entry that has not yet been judged, hide that commentary with spoiler tags,

like this,
so that the judges can view the entries with fresh eyes!

If spectators would like to play the home game, please feel free to do that in another thread.

Once these tournaments have been completed, we try to archive them on these boards for posterity, and so that the adventures can be run or plundered by future Internet generations. We make no claim of ownership over the entries, but we do request that you do not remove or alter your entries once the tournament has concluded.
The challenge begins! Let’s get into it! 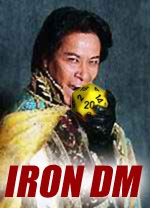 (As always, thanks to @Pbartender for photoshopping this pic of Chairman Kaga biting into a d20 back in the day.)


Congratulations to Wicht for securing the 2nd-Place title.

And congratulations to Gradine, the IRON DM 2021!
el-remmen and Neurotic have agreed to participate in an exhibition match to determine a 3rd-place winner in this tournament. This match will be quick, using the oldest-of-skool rules:

1 hour. 6 ingredients. No word-limits. No editing after posting.


Congratulations to el-remmen!
For those who prefer to follow along with a visual bracket, el-remmen has provided one that includes all final standings in this post.

Is where the smack talk goes? Asking for a friend...

Fenris-77 said:
Is where the smack talk goes? Asking for a friend...
Click to expand...


<smack>Don't worry if you don't get an answer, by the time your miserable showing in IRON DM 2021 is done you won't have anyone willing to admit to being your friend. </smack>

el-remmen said:
<smack>Don't worry if you don't get an answer, by the time your miserable showing in IRON DM 2021 is done you won't have anyone willing to admit to being your friend. </smack>
Click to expand...


Yeah, well, I haven't taken a dump in three weeks coming into this competition. Three weeks!

Do you know why? Because I'm going to win Iron DM. That's right. No. 2 IS NOT AN OPTION.

Can someone find the Iron BM thread for Snarf so he's in the right place?


I think you meant constipated.

Fenris-77 said:
Can someone find the Iron BM thread for Snarf so he's in the right place?
Click to expand...


You don't scare me, Fenris-77. I got chunks of guys like you in my stool.

Snarf Zagyg said:
You don't scare me, Fenris-77. I got chunks of guys like you in my stool.

You know, you left yourself so wide open with the use of stool there I don't even really feel like I need to work it.

@Fenris-77 and @Gradine, you have 24 hours to post your entries to this thread. Please limit your entry to a title, a list of the ingredients used and 750 additional words. Be aware: if you include descriptions of your ingredients with the ingredients list, those descriptions will count against your word-limit! Entries that exceed their word-limits will be considered to end once they reach that limit; everything after will be ignored.

The judges will be using Wordcounter.net to ensure that our counts are consistent.

Please include your list of ingredients at the beginning of the entry and please do not edit your post once it is submitted. Please refrain from reading your opponent's entry until after you have posted your own. You are on your honor to do so.

Radiating Gnome said:
Please limit your entry to a title, a list of the ingredients used and 750 additional words.
Click to expand...


[makes mental note that the title is not included in the word count, plots to dodge the word count by writing an entry with a 300 word title... ]

humble minion said:
[makes mental note that the title is not included in the word count, plots to dodge the word count by writing an entry with a 300 word title... ]
Click to expand...

So…your strategy is to give the judge a negative impression right at the outset? It’s a bold move, Cotton. Let’s see if it works out for them.

Rune said:
So…your strategy is to give the judge a negative impression right at the outset? It’s a bold move, Cotton. Let’s see if it works out for them.
Click to expand...

Maybe trash talk in the tournament thread counts against your next word limit, though.....

That is... not an easy set of ingredients! How fiendish

If a picture is worth a thousand words, what's the exchange rate for a dank meme?

humble minion said:
If a picture is worth a thousand words, what's the exchange rate for a dank meme?
Click to expand...

Wouldn’t it be worth a thousand words for the picture part + 1 for each word used?

humble minion said:
If a picture is worth a thousand words, what's the exchange rate for a dank meme?
Click to expand...


Depends on the dankness!

I mean, some are so dank they take words away from your competition.

Good luck to the contestants. Not an easy list of ingredients to start with. Insert obligatory sewer level.

C
Not the Iron DM Tournament
2 3