Either having a really bad allergy attack or fighting the beginning of a cold. Must sleep now.

So, is there anything from this post you guys are willing to give to any of the NPCs with you to make them tougher companions? The two functional heavy crossbows and the 9 screaming bolts haven't been claimed yet. You also have the 9 eyes of doom and an extra cloak of resistance +1. Also, does one of you want to claim the wererat assassin's amulet of health +2 or lend it to an NPC? There is also an extra cure moderate wounds potion for the group.

I'm assuming you've given over the 3 damaged crossbows and poisoned weapons to the dwarf blacksmith who will fix the crossbows for you and clean the deadly poison from the masterwork spear and arrows. He should have them ready for your PCs after you get back from Gurnard's Head.

I'm going to let Aureus use the +3 composite crossbow for now, and she bought some arrows and a quiver from Mabron with her personal funds. (She insisted on paying for them even though he offered you all free bundles of 20 arrows each.)

Knightfall said:
So, is there anything from this post you guys are willing to give to any of the NPCs with you to make them tougher companions?
Click to expand...

Must’ve missed that. I’m all for giving the NPCs some of that; we already have some great gear.

So, one initiative roll for Gareth and Timmins since they consider themselves a team. The same goes for the Bowen cousins.

@Scott DeWar, did you want me to roll Init. for Quinn?

Order, so far, for the Surprise Round. Each character gets one standard or immediate/swift action and any number of free actions.

So, how I'm going to handle the NPCs (besides Aureus) is that they will follow the PCs orders almost to the letter (and within reason). While both Gareth and Timmins have some experience in the past, they haven't been adventuring in a long time, so they will defer to the PCs if things get intense.

Note that while Meridith and Wieland are older than Caerth (*), they did grow up in the same area as the half-orc. In the past ,they likely didn't think much of him, but since he helped bring back Lord Pendour's body, they've come to respect him at least. Meridith will likely follow his lead while Wieland might object once in a while.

Quinten has a camaraderie with Quinn, so he'll look to the chain-wielding fighter for guidance.

Brutus is the one wild card. He is young, inexperienced and has a lust for fighting. He is only 16 years old, so your PCs shouldn't let him go in, axe swinging, without Quinn (or Caerth) there to back him up.

* I'm assuming. Meridith is 21 and Wieland is 27. I didn't see an age listed for Caerth on the Rogues Gallery, but I'm assuming he's not older than Wieland. I guess he could be Meridith's age or a little older.
Last edited: Sep 10, 2019

JustinCase said:
Must’ve missed that. I’m all for giving the NPCs some of that; we already have some great gear.
Click to expand...

Okay, so I'm going to dole out the gear to the other as follows:

Here's what Caerth saw in the tower. 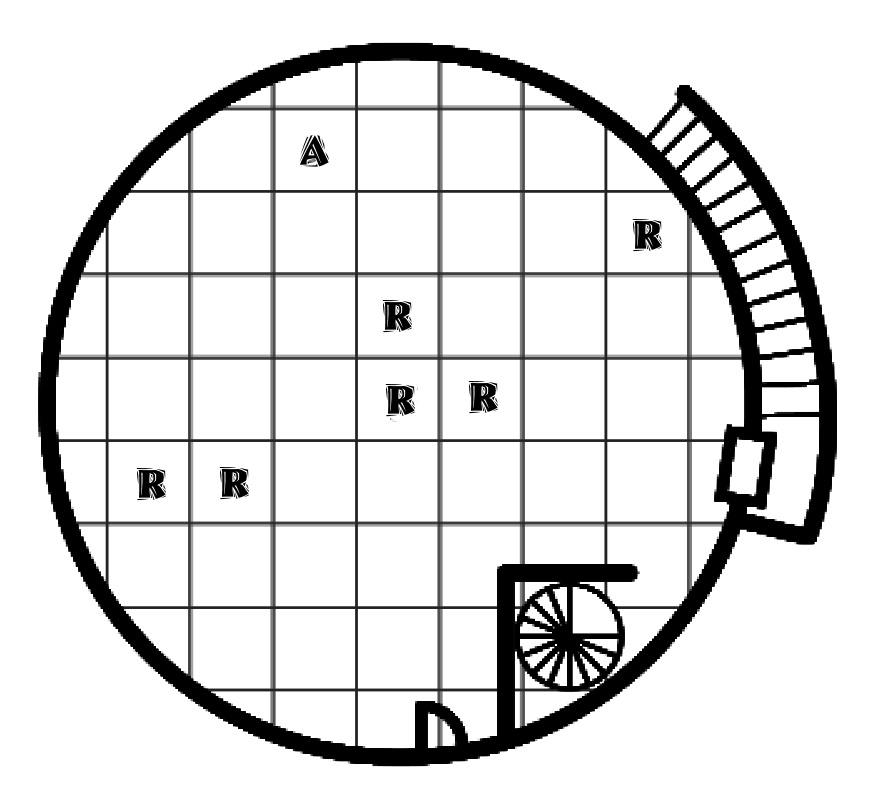 I bought the PDF version of the module, so I can use the maps.

Each square is 5 feet. The outside stairs lead up to the second floor of the tower, which is the main entrance. The spiral stairs lead both up and down. Down is the way you have to go to get to the entrance to the cultists' temple.

Since Caerth got out without the rooks seeing or hearing him, you can make a plan of attack (and still get surprise). However, if your PCs debate too loudly, they might hear you. Plus, there might other rooks around that might discover your PCs.

Aureus suggests stealth, of course. Brutus wants to attack, but Quinn has him reigned in for now. The others will follow your orders.

Quinn would quietly suggest a barrage a missile weapons and then charge in.

And don't forget that when you first entered the tower, you did so through a damaged section of the tower to the floor above this one, because its door was initially barred from the inside. Your PCs climbed up with a rope and then explored the tower. (That third floor is where you fought the ochre jelly, and where the chapel, with the sanctuary spell, is located.)

That hole hasn't been filled in so you could use it again, but it was a tough climb because the stonework is unstable. I think Aureus manged to stabilize it enough, so it didn't collapse. but that was a while ago now. I can't remember the DC off the top of my head (there isn't a suggested Climb DC in the module), but I don't think it was higher than 20 without a rope (15 with a rope). I'll see if I can find it.

Regardless, your PCs have done the climb before so they get a +2 circumstance bonus if they do it again. The new NPCs with you don't, however.

You could choose to send some of the group up that way and then attack from the stairwell whiel the rest charge in through the doorway. Note that if the rooks manage to block some of the characters on the stairs, it is not an easy place to fight from. Anyone without at least 5 ranks in Balance is considered flat-footed while fighting on the stairs, and if the rooks have the higher ground, they get a +1 to attack.

Note that it would be easy to collapse the decaying stonework, which would make a lot of noise. Noise that might attract the attention of the rooks. A few would investigate, at least.

Also, Phar has fireball memorized, which could be useful.