D&D General Read The Beginning Of Dragonlance: Dragons of Deceit!

The first few pages of August's upcoming Dragonlance novel Dragons of Deceit from creators Margaret Weiss and Tracy Hickman are available to read over at Polygon. It opens up with Destina Rosethorn, a Solamnic noble, just before the War of the Lance, the central conflict which was portrayed in the original Dragonlance Chronicles back in the 1980s. The novel trilogy features time travel.

Alternatively you can listen to the excerpt below!

The cover, with art by Philipp Urlich, was revealed some months ago; it features Destina, flanked by Tasslehoff Burrfoot and a dwarf called Wolfstone, who comes from Thorbardin. Behind them is Saber, a copper dragon. 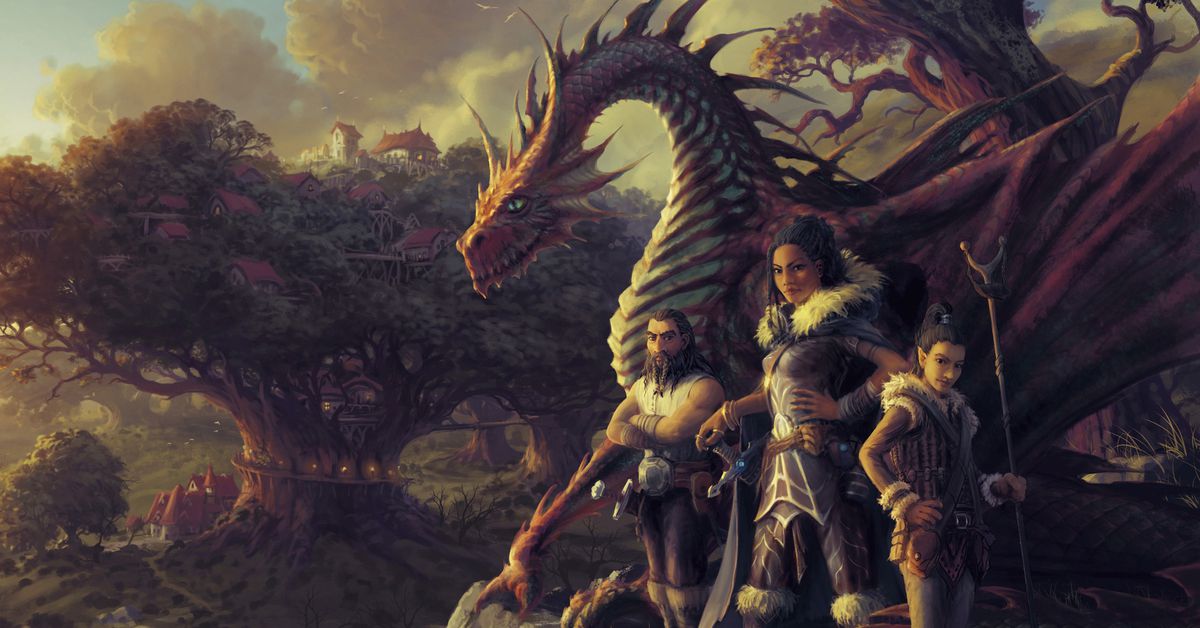 Read the opening pages of Dragons of Deceit, the first new Dragonlance novel in more than a decade 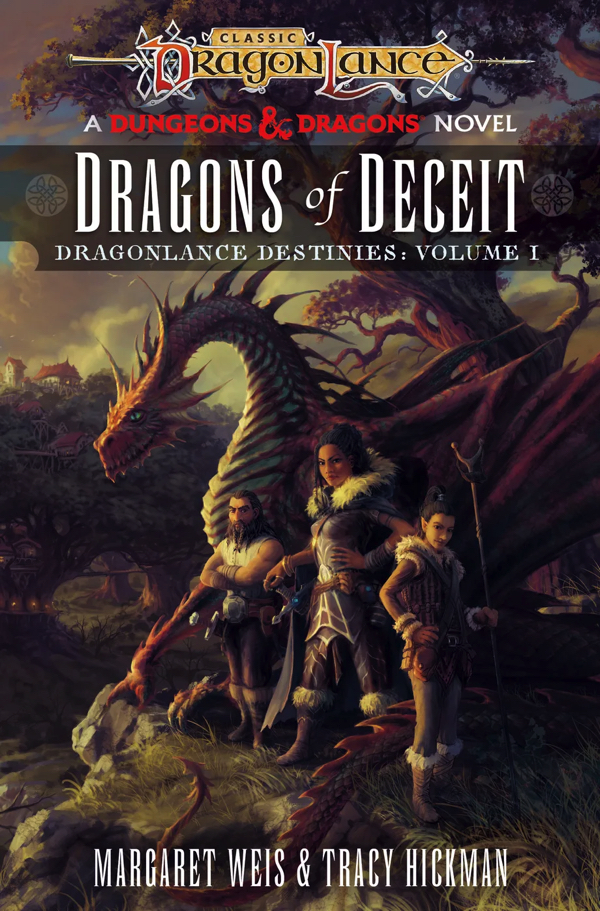 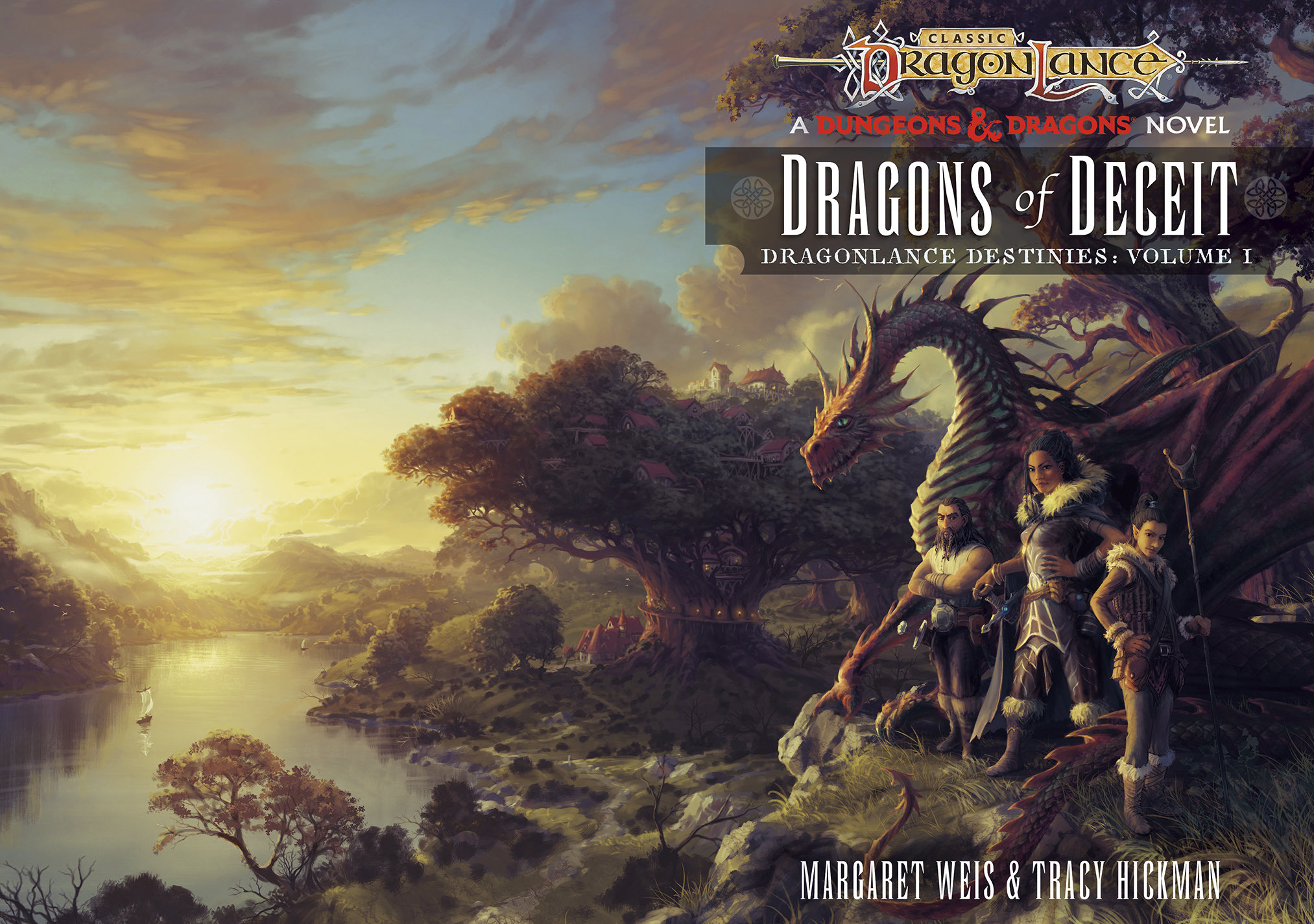 Helena Real said:
I agree with you—to a degree. Although I love the books (I'm currently reading the Chronicles + Lost Chronicles combined in chronological order), they're definitely not as innovative and impressive as they ones were, especially so for newer readers. I enjoy them immensely for what I think they are: well-written D&D novels. I like them way more than anything I've read written by R.A. Salvatore, for example, or most Ravenloft, Dark Sun, or Gygax novels.

In my opinion, though, the post War of the Lance is pretty much the perfect period to set your adventures... As long as you ignore anything past the Legends trilogy. Krynn is finally at peace and the character options are now wsy open. I'd even add the newer classes, like sorcerers and warlocks to the mix, without much hassle and we're good to go! With Takhisis secured in The Abyss it's time for the rest of the evil gods to shine as antagonists—or even some wayward neutral ones or even overly zealous good ones, if you want to add some spice.

My way of looking at it is that it's better to play in a situation with a) as many character options as possible and b) the least amount of info dumps necessary to bring people up to speed.

Now, and this may be a generational think, but half the people I play with (people in their late 30s, early 40s) either have first-hand experience with Dragonlance and/or have read some fiction set there. Of that half, however, only a small minority have read/know about anything beyond the War of the Lance. So, at least for us, setting adventures after the War of the Lance is the best timeline for what I described above.

My problem with the post War of the Lance period is that it's too calm. Everything has just been wrapped up nice and neat with a little bow and everything is just fine. What that era lacks is conflict material for running games by default. The Age of Mortals by post War of Souls by contrast has the tensions between sorcerers and wizards, the two remaining dragon overlords and the widespread effects of those who were slain, the elven diaspora desperate for a homeland, the dwarves isolated embroiled in a civil war, and a largely devided and fractured world reeling from a devasting war (thought the last bit is also true post war of the lance to be fair). All of that is wonderful material for dungeon masters for games, particularly for those who struggle to come up with entire plot arcs on their own without help. I'll concede that's probably all a matter of personal preference though. I'm not saying I want edgelord angsty (good lord I love making fun of some of the AoM books from the early 00's), but Post of the Lance is just too black and white for my tastes.

And, not to be a naysayer here, but, Dragonlance without Takhisis is probably a non-starter too. If folks don't know what Takhisis is, imagine how little they know/care about any of the other Dragonlance gods. At least Bahamut/Paladine and Tiamat/Takhisis have pretty easy recognition. Plus, you've got a whole Dragon book out right now that's leaning pretty hard on the whole Fizban thing.

While I could easily be wrong, I am going to guess that the new DL setting is going to be starting at the same point on the calendar as the original modules. There are quite a few areas in Ansalon that could host lots of different adventures without treading on too many of the original series toes. It's not like the original series delved too deeply into every location. There's lots of locations that are barely mentioned. So, use those and do a different War of the Lance adventure.

In my mind, I hope they kind of lean on the whole Dragonheist style adventure where it's half setting guide, half adventure and you can make that adventure a lot more open ended. At least, more open ended than the original modules.

DarkCrisis said:
Good book. Sequel is told in an interesting way that becomes clear near the end.
Click to expand...

Synopsis of book 3 looks like it will be very different from either previous book, as well. I can’t wait.

DarkCrisis said:
Good book. Sequel is told in an interesting way that becomes clear near the end.
Click to expand...

Reynard said:
I'm trying to figure out if 10 year old me would have just totally accepted the name Destina Rosethorne, because [redacted] old me can't even.
Click to expand...

Given we’re talking about a setting a that introduced Sturm Brightblade in its wildly successful originating series, I’m betting younger us would have had no problems with it at all…

humble minion said:
Given we’re talking about a setting a that introduced Sturm Brightblade in its wildly successful originating series, I’m betting younger us would have had no problems with it at all…
Click to expand...

While your point is very likely fair and the setting is definitely full of silly names (Kender or otherwise), I'd point out that most of the time it's limited to surnames. Sturm is actually a fairly decent name by medieval standards, and I'd argue that Rosethorne is hardly the objectively terrible part of her name.

Blando’s map bothers me. Sanction is a port city and he has it in the middle of the mountains.

Return to Dragonlance in Dragons of Deceit Novel Preview

Return to Dragonlance in Dragons of Deceit Novel Preview

Frankly never read any of the Dragonlance series. This does look interesting though.

B
Dragonlance: Dragons of Deceit Review
2 3 4

D&D General The importance of Dragonlance
2 3