THe party headed south - or at least tried to. Give me an awareness check to see if you can keep your bearings or if you get lost again...

Perhaps it was because of the noon sun directly overhead, but the group couldn't seem to get their bearings (OOC: with this many failures, I'm assuming that Frog Froth, even if they had succeeded, was overruled)

After picking a direction and some walking, the party arrived at a building that was in better condition than the others. It was built with large topaz flecked stones (not an uncommon building material in the Yellow City, but usually reserved for the better structures). It was squarish, squat and perhaps 60 feet wide. Its solid construction and lack of windows indicated that it may have been built with defense in mind.

A trail leading to the vestibule indicated that the building was still in use!

What does the party do?

Dubi Gan sighed. Those living in this area had not been helpful so far, but he was loathe to miss an opportunity. He waved the group toward the topaz fort.

"Be on your guard," he told the others, "But let us see who is home. Perhaps we will find someone knowledgeable and friendly after all."

He didn't sound like he had much hope of it.
W

I knock on the door using the pommel of one of my swords.

There was no response. But, after a moment of silence, faintly, from withing, you heard... noises. Faint speech noises perhaps, but if so, spoken by inhuman mouths... 2-3 "speakers"

This close to the door, you also smell a peculiar odor... a musky, acidic smell - not like the vinegaroon, which was much more pleasant. More... unhealthy.
W

This doesn’t seem good all, perhaps we should move on.

"We must remember - we are not here to look for conflict. Just the Blue Palace." Dubi Gan excused them as they quickly shuffled away. "There is no shame in us moving on."

The group moved on from this somewhat worrisome building - whoever or whatever was inside, they could keep it.

Despite heading "south", they rand into the jungle of Lahag. This was not where they wanted to be, but at least it was a landmark! They headed south again, to explore the area between the Dead Palm God shrine and the house of the brass golem, pretty confident of their bearing.

Following a fairly clear boulevard south (good visibility, good travel speed), the party spotted, a few hundred feet away, another of these strange looking yellow spiders - the ophilinone. It saw you, and whooooped. The group's initial concern became serious alarm as dozen, hundreds perhaps, of whoooops answered, and a swarm of of them came bursting out of the bushes.

Our heroes have a moment or three to react before the ophilinone swarm reached them.

- There are no good hiding spot in the immediate vicinity. If you ran away you can probably dive into some bushes before they reach you, but with so many of them hiding will be difficult.

- The swarm is to the south of you - between you and the Red Road.

- You think they might be slightly bigger than the ones you fought previously, but you aren't certain.

- You might be able to reach another "zone" (the fort in the middle of the map, the dead palm tree shrine) but it's dicey, and depends on them having less endurance than you

- The Jungle of Lahag is also an option (it's closer than another "zone", farther than the tower), but an extremely risky one - it would essentially be based on the ophilinones being too afraid to follow because whatever is in the jungle is worse.

No it's not the same building, it's closer. The dodgy place you chose not to explore wasn't a tower. Sorry that wasn't clear.

"Run! Run for that tower!" called Dubi Gan, unable to mask his fear, "We will try to hold out there, should they come for us!"
W

I take off at a slug run at the tower

Pinpehlu wastes no breath and starts running back to the tower, his face screwed in concentration as the porters tries to hold his yoke and bags on his shoulders. The small rotund man moves faster than one would expect with his stature, but he is panting and sweating profusely.

The party reaches the tower, beating the swarm due to their lead. You go up a flight of stairs running up the side of the tower, noting that the tower even has arrow slits. You are happy to see that the door is A: stout and in good condition and B: slightly ajar. You burst in, and found that the door can be bared with a conveniently placed log, which I imagine you do so in a great hurry.

As you take a moment to look around, one of you notes that the log is in good condition - this is not a semi rotting piece of wood but a hale piece that still had a bit of green in it. This will make the log resilient, but it also mean it's fairly new... It may have been placed there a few months ago, but certainly not years ago.

You are in some sort of vestibule (5 by 10 feet, it's quite crowded at the moment) , with 3 exit - the door you just came in and bared, a door (more "inside door" than "keep the monsters out" type) in front of you, and a door to your right.

What do you do? 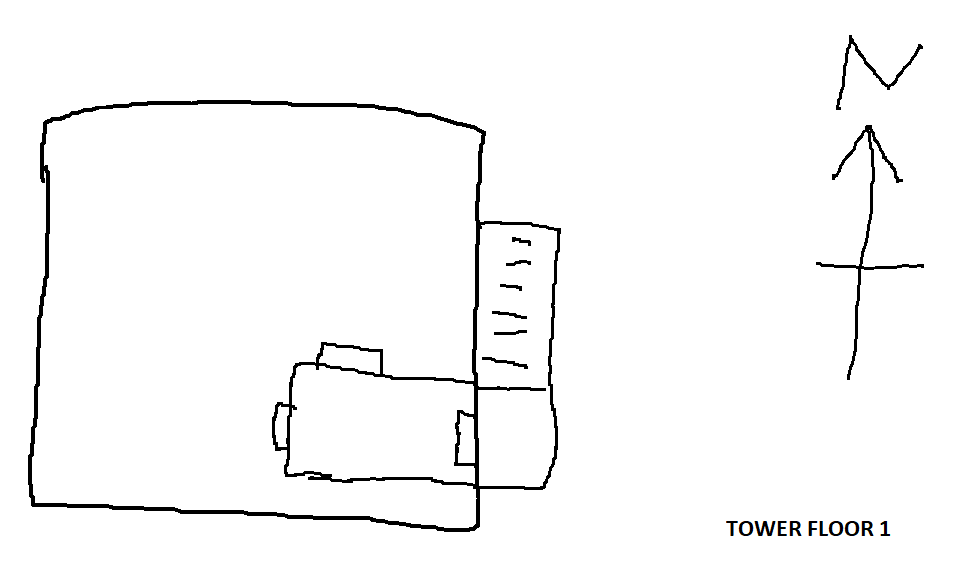