The buildings are clearly part of the garden-shrine, built of the same material and in the same style. They aren't very large, and are probably places for the holy men to live, places to store materials etc... they are in good shape, you suspect this shrine was abandoned later than the others.

I grab my swords and go investigate the three bodies. I will check them for valuables then I hope to bury them if there is some good ground nearby.

Dubi Gan began to search the shrine for some sort of records, maps, or other clues as to the location of the Blue Palace.

Dubi Gan looked at the corpse, who is now nothing but a faint blurry outline. He remembered a scroll he once read, a fragment "rescued" from fallen Syr Daria. In it, it spoke of a type of person who was overcome by greed - so much so that they couldn't abandon life and rejoin the Wheel of Reincarnation. These spirits were called Preta, and they were cursed to gorge on vile things - their appetites insatiable even though they hated the stuff. You realized that legends you heard as a kid matched this description - and that those legends specified that the Preta couldn't be harmed saved by magic or blessed weapons.

Frog Froth, you think that the bodies have been dead quite a long time, although you get a general sense that the deaths were not at the same time. Their equipment and clothes are decayed long past salvaging. However, two of them were carrying a substantial number of coins - 2000 coppers, 900 silvers and 30 gold pieces.

(Which is the equivalent of 631.25 rupees. It's not a fortune, but if you gave up and turned back home now, this expedition would count as a success).

I would like awareness checks to see if the party finds anything else.

Dubi Gan is looking in the wrong place.

Miu, while Frog Froth is examining the bodies, you are exploring what must have been a private chappel for the holy men. It's clear to you that the place was either abandoned "in order" - people brought stuff with them as they left - or picked clean by looter. However, you find, hidden under a pile of leaves, 3 small clay pots with some liquid inside (maybe 300-500 ml each). They look like jars used to store palm wine.

This strikes you as interesting because

1: On one hand, this is probably garbage because palm wine goes bad quickly
2: On the other hand, this was the shrine of a palm-tree god....

I’m going to bury these folks with a penny on each eye.

Ancalagon said:
1: On one hand, this is probably garbage because palm wine goes bad quickly
2: On the other hand, this was the shrine of a palm-tree god....
Click to expand...

First, I'll take a whiff of the bottles to see if they've gone bad, and pour bit in the palm of my hand to see that it's actually wine color.

Then — if it smells and looks fine — I'd like to take a little sip.

You break the wax seal on one of the jars. The wine within it smells fresh - excellent in fact. You take a sip, and can't help yourself but taking a frank swing.

You come back to, flat on your back, the jar spilled.

You have two jars of palm-god-wine. Drinking from them gives the user the vision power of a seer (do a luck check to succeed). A trained seer like yourself can use them without the luck check (or spending luck). You think that with some focus (and an assistant to stop you from dropping the jar) you could direct the vision in a useful direction. Or, you could sell this for a lot of money. Each jar has enough liquid for 3 visions.

"Hey, I want some of that," Pinpehlu jokes as he sees Miu drink from one of the jars and fall over.

The porter grins, then looks concerned. "Are you alright?" he says, rushing to the seers side.

Pinpehlu helps Miu back on his feet and, finding nothing more of interest in the area, helps Frog Froth bury the dead.

It is now about noon. Where to next? 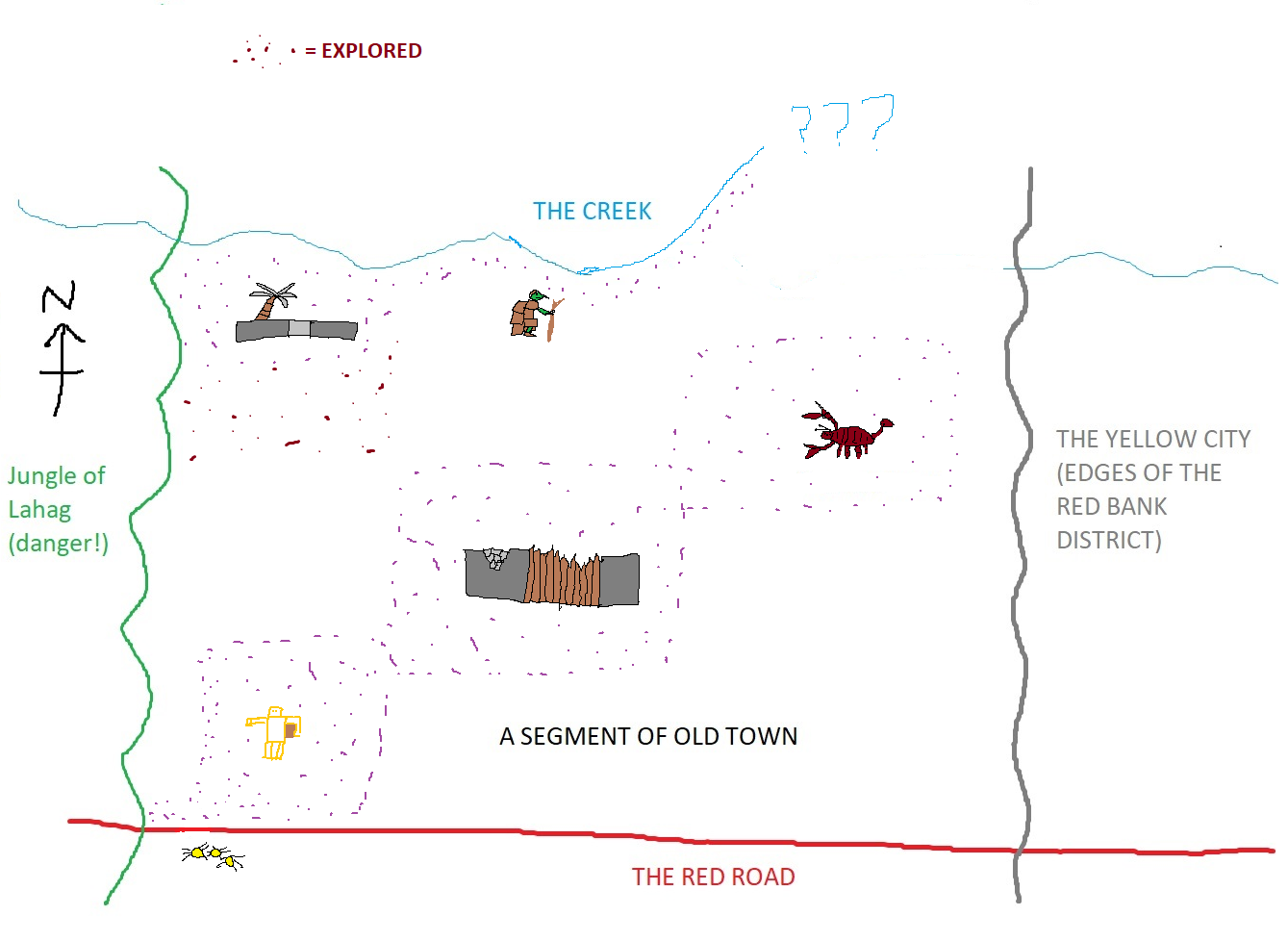 Dubi Gan drew the map in the dirt outside the Palm Shrine. He poked at the shrine and said, I suggest we walk south until we reach the spot where we found the construct, and then follow the Red Road eastward, but stay north of it. We should avoid that walled compound, of course, but I should be very surprised if we don't find the Blue Palace by the time we reach the river."

He tried to sound confident, but he was beginning to despair that his research had been wrong all along, and the Blue Palace was not, in fact, in this segment of Old Town.

JustinCase said:
"Are you alright?" he says, rushing to the seers side.
Click to expand...

Miu, dizzied and overwhelmed by the spontaneous vision, seems no different than a babbling drunk.
"Blood pouring from... Holy men!! And a great tree... so much blood!!"

After Pinpehlu helps Miu back up, he takes a few minutes to compose himself and tells the others what he saw in his vision:

Ancalagon said:
...you see 3 men, dressed in holly robes. They are looking at a great palm tree, its trunk darkened. They poor blood on the ground. Nothing happens. The eldest breaks out in tears, steps forward and slits his throats. More blood on the ground, but nothing happens. The others sigh deeply, pick up backs, and leave.
Click to expand...

"Perhaps it's a sign that we must offer blood to the palm tree of this shrine..."

ooc: Is there a palm tree nearby resembling the one in my vision?

tuffghost12 said:
"Perhaps it's a sign that we must offer blood to the palm tree of this shrine..."

ooc: Is there a palm tree nearby resembling the one in my vision?
Click to expand...

Yes - the tree is long dead, almost petrified. Frog Froth believes that is is the corpse of a God-Tree. He knows of at least one other (the Memory Tree) that still lives in the Yellow City - of a different species however. Blood is a common sacrifice given to the gods (some have more... peculiar... tastes) and it seems that, judging from your vision, the God-Tree was no longer able to accept sacrifices - perhaps it was already dead.

This would indicate that the 2 jars of palm wine you have are from the sap of a God... no wonder they are so potent at inducing visions.

"Sacrificing blood to a tree?" says Pinpehlu wide-eyed. "Do you think that was literal or symbolic? I mean, I guess there is water in blood, but I don't know if that can sustain a tree. What do you think it means?"

The porter is fine with following the path suggested by Dubi Gan.

I am fine with whatever. I pay my respects at the tree as we prepare to leave.