HEY!! I yell hoping to startle the creatures as I draw my swords. One sword per hand to start I will move to defend my compatriots but not make the first strike.

OOC: Troika is not a tactical combat like pathfinder - if you need to draw a weapon, move a bit (say a dozen feet), back off a bit, it's ok. Serious movement takes your action.

When caught unaware, there are a few consequences. First you don't get to go. Second, people attacking you in melee don't risk a counter-attack, they are just rolling to hit. Third, the hits can do more damage (but your armor will help somewhat vs that).

One leaps at Subotai
surprise attack vs subotai : 2D6+1D6 = [1, 6]+[5] = 12
@Fradak the first 2 rolls are the skill test (which it failed) and the 3rd is the damage dice (had it hit). The creature leaps at you and violently stabs at Subotai's back - but there is a loud "ping!" as its dagger fails to pierce an iron band of your armor.

No one attacks Dubi Gan due to his position, so his lack of awareness has no consequences

Two monsters leap at the slugman, perceiving him as easier prey due to its shorter stature - however Frog Froth is ready for them

@wingilbear please give 2 sword skill check (2d6 + skill + sword skill), along with 2 damage rolls (the winer of each check does the damage). Note that the damage roll above have not been modified for your protective blessing.

(the map illustrates the party stopped in a small clearing besides the Red Road).


@JustinCase give me one opposed weapon skill check (2d6 + skill + weapon), along with a damage roll (1d6). You have the option of trying to punch it (minimal damage), hook it or wrestle it using your Strength (half score)

@tuffghost12 give me two opposed weapon skill check (2d6 + skill + weapon), along with two damage roll (1d6). You have the option of trying to punch it (dropping your staff and doing minimal damage), or bash it with your staff.

OOC: Once everyone's defense/counterattack roll is made, the not-surprised party members get to declare what they are going to do. If you are attacking, please roll one opposed fighting check and one damage check

Ancalagon said:
@tuffghost12 give me two opposed weapon skill check (2d6 + skill + weapon), along with two damage roll (1d6). You have the option of trying to punch it (dropping your staff and doing minimal damage), or bash it with your staff.
Click to expand...

OCC:
I'll be attacking with my staff!

Pinpehlu watches the strange creatures, and his face distorts with convulsion. What horrible creatures lurk in the outer city!

As one of them attacks him, the porter instinctively puts up an arm in order to protect his face, and with the other hand he swings at the monster.

Just like a dockside fist fight, he thinks to himself, before realizing it really isn't. Remembering a fight were his cousin was stabbed with a bale hook, Pinpehlu knows that it is the better option to get rid of the monstrosity in front of him.

Quickly reaching for the hook, he takes a stab at the spiderlike creature.

@tuffghost12 You swing your staff in a wide arc around you, not impacting their body but doing serious harm to their multiple legs and forcing them to recoil, foiling their attack. What do you do for your action?

@JustinCase you bat aside the jabbing knives and smack the thing in the face! As it collects it wits, you close in with your hook

@wingilbear Those are the right values but the forum didn't roll. You can use CoyoteCode Dice Roller v. 2.0 , and you have to roll twice, not once, as you are being attacked twice. You can also declare what you want to do with your action (attack, withdraw, something else etc). Edit: also, the 1d6 damage rolls.

wingilbear said:
With bonus I rolled a 10 then an 11, so I tied on both??? rolled a 3 then a 4 for the damage rolls which means 6 damage for both
Click to expand...

Frog Froth slashed at the spider like creatures, making them shrink back, unwilling to lose limbs, and thus fouling their attacks.

Ooc: a tie means no one gets hurt (appart from two 2s or two 12s), but you can test your luck to change one, or both , ties into a hit. Keep in mind that testing your luck reduces your luck.

What are you doing for your action?

tuffghost12 said:
Miu takes out his knife and throws it at the creature who attacked Subötaï. Then braces himself, holding up his shield, in case the two creatures he previously attacked decide to pounce on him.
Click to expand...

Note that firing into melee in Troika is risky, you risk hitting your ally. Are you still willing to do so or do or do you want to switch?

Ancalagon said:
Note that firing into melee in Troika is risky, you risk hitting your ally. Are you still willing to do so or do or do you want to switch?
Click to expand...

@Ancalagon Ya, I'll switch then.

Seeing the two creatures recoil, Miu quickly advances towards them. He raises his shield, pushes back the left creature, and swipes at the right one with his staff.

@tuffghost12 please give me an opposed roll for your attack.

8 damage if I hit something


@tuffghost12 please give me an opposed roll for your attack.
Click to expand...

Miu stepped in to bash one of the yellow monsters, but recoiled as its clever knife work resulted in a jab in the gut. Thankfully, the dull blade did a poor job vs the padded coat, and Miu took only 2 points of damage.


Taking half a step forward, Frog Froth struck the strange monster between the eyes, the kukri slashing through the carapace. The being shrieked, jumped back and fell over, dead.

End of Round 1!
Ooc: will post a recap and the start of round 2 later tonight.

How many attackers can I see? What is the nearby terrain like?

Beginning of round 2. No one is surprised anymore, everyone can act. (@Fradak @FitzTheRuke you can act now!)

Pinpehlu, you are holding one of the ophilone's stabbing arm as you are about to hit it with your hook again, but with a loud pop creature yanks itself free by leaving its arm behind. You are now holding a long skinny arm with a knife - Said arm is still trying to harm you, what do you do?

@wingilbear You are in a small clearing near the Red Road. The party is roughly arranged as per the map. There are 4 ophilones - those strange ovoid spiders - as well as one stabbing arm. One Ophilone has died at your blade, and another is fleeing. I should mention that slugmen can look in multiple directions at once, it is trivial for you to look behind you while keeping an eye on your foes... 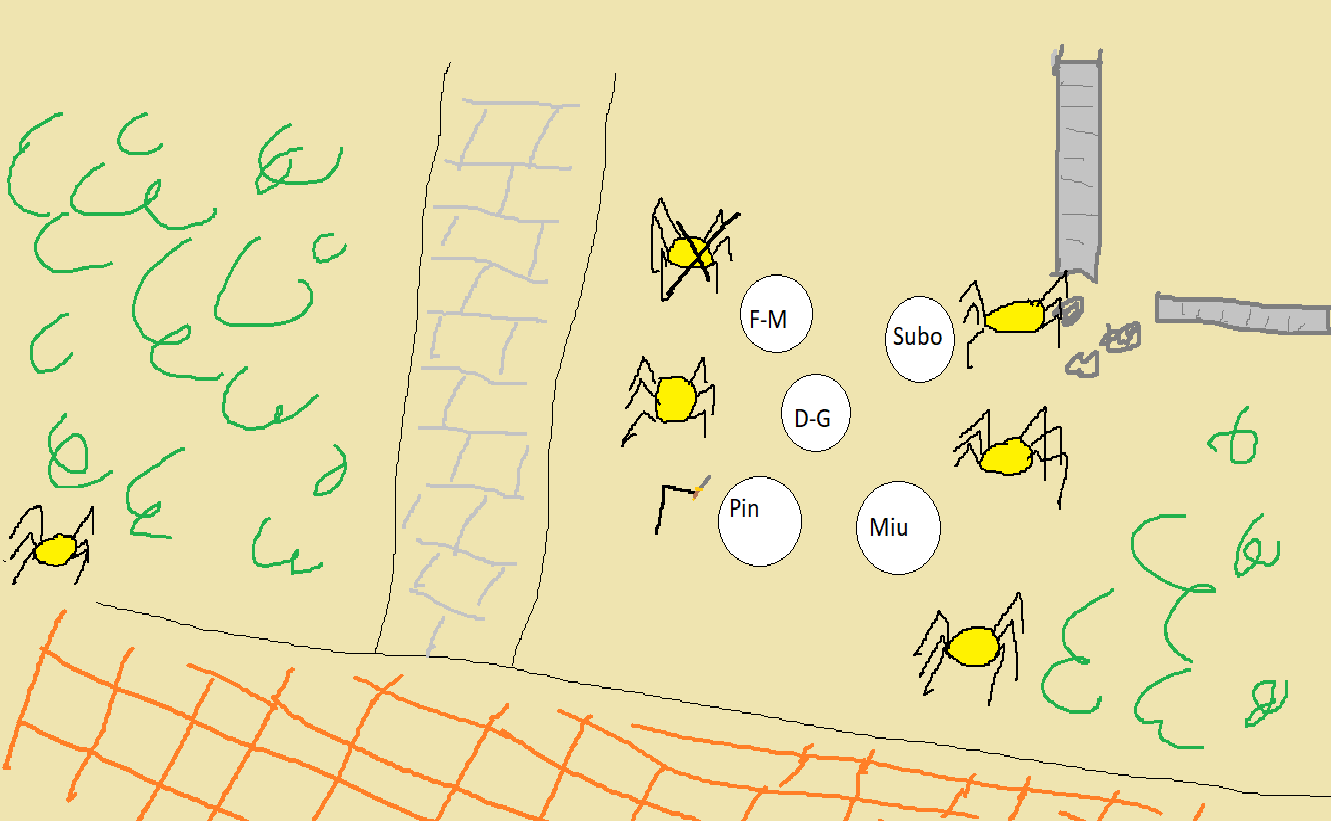