WotC released some figures this week. I thought it would be fun to compare them to the demographics of our own little community here on EN World for the same period (2019).

WotC uses a metric it refers to as 40,000,000 'D&D Fans', but that's not defined. For the purposes of this, I assume a fan is a person who has interacted directly with D&D in some way (played a game, bought a book, watch a stream, played a video game, etc.) A fan's a fan, however they interact with D&D!

For comparison, I'm using people who have interacted with EN World in some way -- and what we can measure is unique visitors. Obviously this isn't on the same scale (40M people is a LOT) but it doesn't matter too much for what we're doing here; they're both samples for conversation. So, let's start at the top!
WotC is looking at 40M fans, we're looking at 5.6M unique users (as opposed to overall visits, which numbers in the tens of millions). We get this data using Google Analytics, which provides a lot of anonymized demographic data. I can't identify any individual person with this; it merely shows the overall numbers. Our demographic data includes just under half of those 5.6M users; I don't know how WotC's data is derived. I know they do surveys from time to time, but I don't know what percentage of those 40M fans fill out those forms.

As an aside - 40 million D&D fans is awesome! We're definitely living in a golden age of tabletop gaming, and as the market leader, WotC is the entity most responsible for bringing in new gamers. Well, maybe Critical Role is, but they're playing D&D!

So, the controversial data that everybody on Twitter is talking about -- the age groups. Google Analytics breaks it down a little differently to WotC's figures, so here's what we have. GA doesn't give stats on people under 18 years of age. The figures below are those GA has data on for EN World -- obviously that's only about half of overall users.


As you can see, the figures aren't as evenly distributed as WotC's. There's a significant number of 25-34 year-olds, and a higher number of 18-24 year-olds. Also, it shows people above the age of 45, who don't appear in WotC's stats. 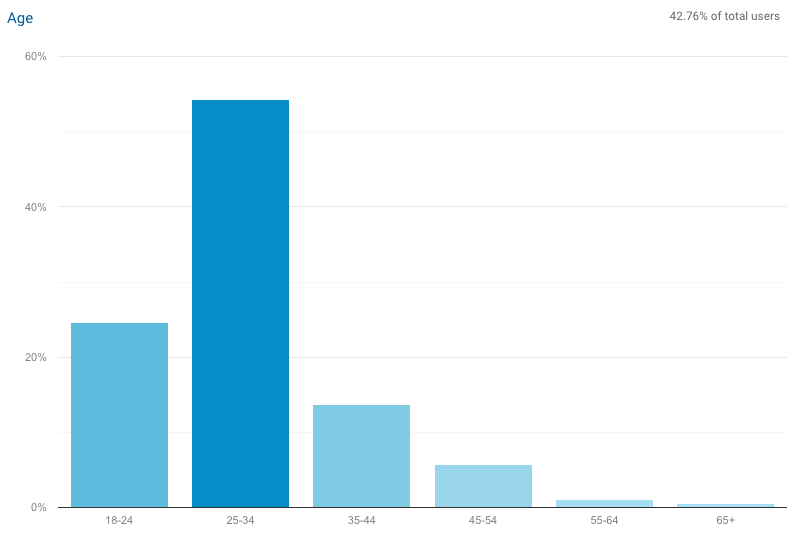 For comparison, here are WotC's figures.

I've turned them into a quick and dirty bar graph. The number of players increases slowly from 8 up until age 35, peaking at ages 30-34, and then it starts to drop off sharply. That's the same age that the drop-off on EN World's readership takes place, too. Seems about 30 is peak age. 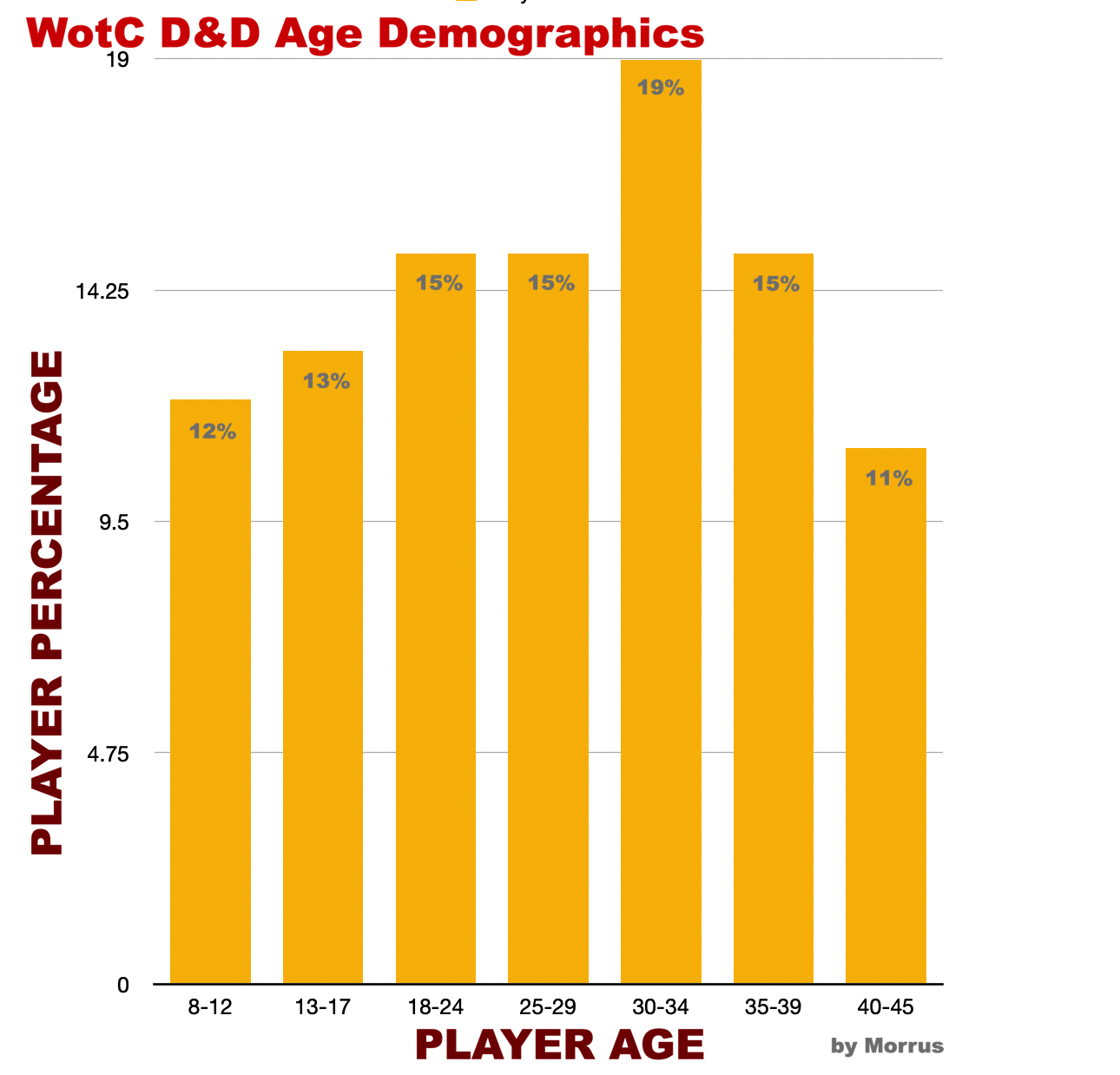 The gender demographics here skew much more male than WotC's stats do. Google Analytics shows male and female (it doesn't track non-binary people) and reports on under half of overall users (2.3M out of 5.6M total). 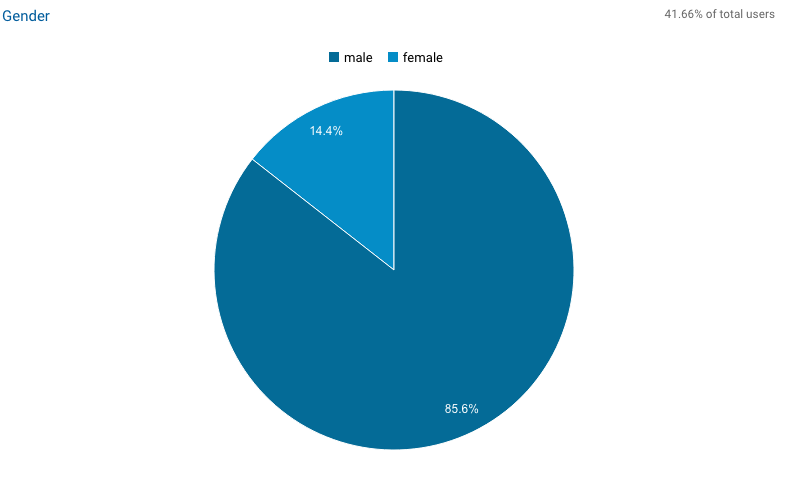 WotC's report shows that Europe is growing for them. As a European (at least geographically!) that's heartwarming news for me. So here's some figures on EN World's geographical distribution.

As you can see, it skews primarily English-speaking heavily, which is expected for an English-language community.

The average EN World reader is male, American, between 25-34.

Nice, very interesting. Actually jives better with WotC data than I would have guessed.

Thanks for this, Russ, it's very insightful. All of these statistics certainly torpedo the idea (if anyone still held it) that the RPG hobby is just full of grumbly old grognards.

Very interesting. Pretty much the picture I had in mind. I'm proud of the very high representation of younger generations. Proves my theory that first generations of gamers showed their kids how to play and they will do the same. Growth is exponential !

Oops! There you go!

It's interesting to see this. I wonder what it'd look like with gender breakdowns of the age groups, both in ENworld's data and in WotC's.

prabe said:
It's interesting to see this. I wonder what it'd look like with gender breakdowns of the age groups, both in ENworld's data and in WotC's.
Click to expand...

It sounds like something Google Analytics should be able to do, but it may be above my competence level with the interface!

Where can we find the new version?

Morrus said:
Where can we find the new version?
Click to expand...

It's in my twitter. See if this link works: https://pbs.twimg.com/media/EWZrG5lVAAASkpA?format=jpg&name=large

Is there an updated link to the full graphic?

Morrus said:
Is there an updated link to the full graphic?
Click to expand...

I got those images from Sly Flourish (Mike Shea) - I'm not sure where he got them from.

If anyone wonders why back in the 90's WotC's market survey cut off at 35, well, here's the reason. Or, maybe people think that D&D has skewed younger in the past twenty some years?

Hussar said:
If anyone wonders why back in the 90's WotC's market survey cut off at 35, well, here's the reason.
Click to expand...

Is it the age range at time if registration it does it update?

Maybe this is the place to ask -- and I'll understand if you don't want to answer, Morrus -- but has ENWorld seen an increase in traffic since the release of 5E?

I ask because it's another metric to gauge 5E's success, since a lot of people distrust WotC's numbers, for whatever reason.

Zardnaar said:
Is it the age range at time if registration it does it update?

It's Google Analytics. It's what Google knows about you, not what your profile here says.

(and your profile here just optionally asks your birth date; it doesn't ask your current age, so the question makes no sense)

6 and a fraction % are in the ideal age range.
7 is a Divine number
6 x 7 = 42 The answer to Life, the Universe, and Everything
(for those who think The Answer is 43, see the fractional percent.)

So we grognards have the best of both worlds and we really do know it all !

Hmmm, I expected to see a lot more grognads in Enworld, but apparently those younglings are taking over....
Last edited: Apr 25, 2020