Supporter
The Colonel leaps when his count reaches zero, and sees his companions doing the same.
With a practiced instinct, he falls through the air, and when he feels everyone else is falling as well -- in that fraction of a second, his mind reaches out and the winds cause everyone's fall to slow.

He lands on his feet, and charges the nearest giant -- a smaller hill giant, as he gets his bearings and assesses the surrounding area.

Lighting courses through his fists and he sends the poor creature staggering back towards the Stone giant with the boulder.

The snake-like water leaped over the side of the smoke hole and landed in the firepit, letting out a cloud of steam. Before the giants understood what had happened, Kahru leaped through. As much as he could feel Waythe willing him to begin to hack and slash, he began by using his magic to befriend the bear.

The bear was a battered old male, larger than most. Some of his teeth had been replaced with metal caps, and his jaw and face were terribly scarred. The bear had been lying in the warmth of the fire, and it raised up, yawned, and began to lumber under the big oak table, following Kahru's advice to stay out of the fight.

Gimlak passed through the cloud of steam that rose out of the firepit as most of thefire was put out. It made his clothes damp, and was hot enough to redden one of his legs, but it was only a mild distraction to him as he psychically attacked the giants at the head table. All of whom stood at once, shaking and holding their heads with their eyes scrunched shut.

Doc and the Colonel landed south-east of the firepit. The strange gunslinger shot a relatively smallish, stupid-looking giantess, and the old soldier shocked her with lighting and she stumbled away with the force of the wind that came with it.

The steam stung, but Gimlak was intent on defeating the giants and liberating his kin, and kept his focus.

Kaligan looks down at the giants below and readies his mind for the leap. A second later he jumps down landing lightly before one of the giants with his sword out and strikes at it quickly, biting into the giant twice.

Kahru saw the old boar withdraw to the shelter of the oak table, but the druid knew that it was not time to pause. There were giants left to slay and in a quick flourish he pulled Waythe from her scabbard and turmed to face the next assailant…

The Star Spawn answered Gimlak in a telepathic barrage of feelings that crossed the border into madness, but the dwarf's defenses were well-crafted psychic walls, and were able to protect his mind. Through symbolic psychic filters, he was able to make sense of the near mindless gibberish. The far realm creature informed him that it had not yet been caught - all was confusion and terror (which comforted the spawn) in the courtyard.

Duvrael and Donnell jumped down, riding the Colonel's wind to the ground where they dashed as one to the far south-west corner and took cover there. Duvrael let his snake out of his sleeve and it slithered into a pile of crates and barrels.

Kaligan leaped down under his own power and bounded forward, cutting at the dumbest-looking hill giant, who had been driven back by the Colonel and Doc. She had been shot, struck by lightning, and now stabbed, and she screamed while trying to stomp on Kaligan to no avail.

Both stone giants rose to their feet, and the one on the west end of the table hollered, "You DARE to interrupt our discussion!? The impudence of the small! This is why I advise our Thane to join these raids! Small folk must be crushed until they know their place."

The two most prepared giants, who had been standing guard in the room moved toward the middle, brandishing massive clubs, while the youth (who had seen the invaders in action) slowly slid downward in his chair, as if to disappear under the table.

Behind the table, one of the giants reached down and pulled out a massive crossbow (more of a ballista) and loaded a javelin-bolt into it. The battle raged in earnest, with the Colonel and Kahru taking the worst of it. First the javelin-bolt nearly got the Colonel. Then, the southern hill giant guard smashed him with a club, staggering him. The hill giant followed that up with a swing of the club at Gimlak, who dodged to the side and the blow struck the edge of the firepit, raising damp ash into the air.

Kahru and the western hill giant guard went at it, with the giant landing a solid blow, and the northman returning it with an elated swing by Waythe. Then, another giant north of the table threw a large stone at him, which knocked him hard, though he rolled with the blow.

By the table was a large boulder, and it began to shake and twist, turning itself into a large but squat, square-jawed stone creature. 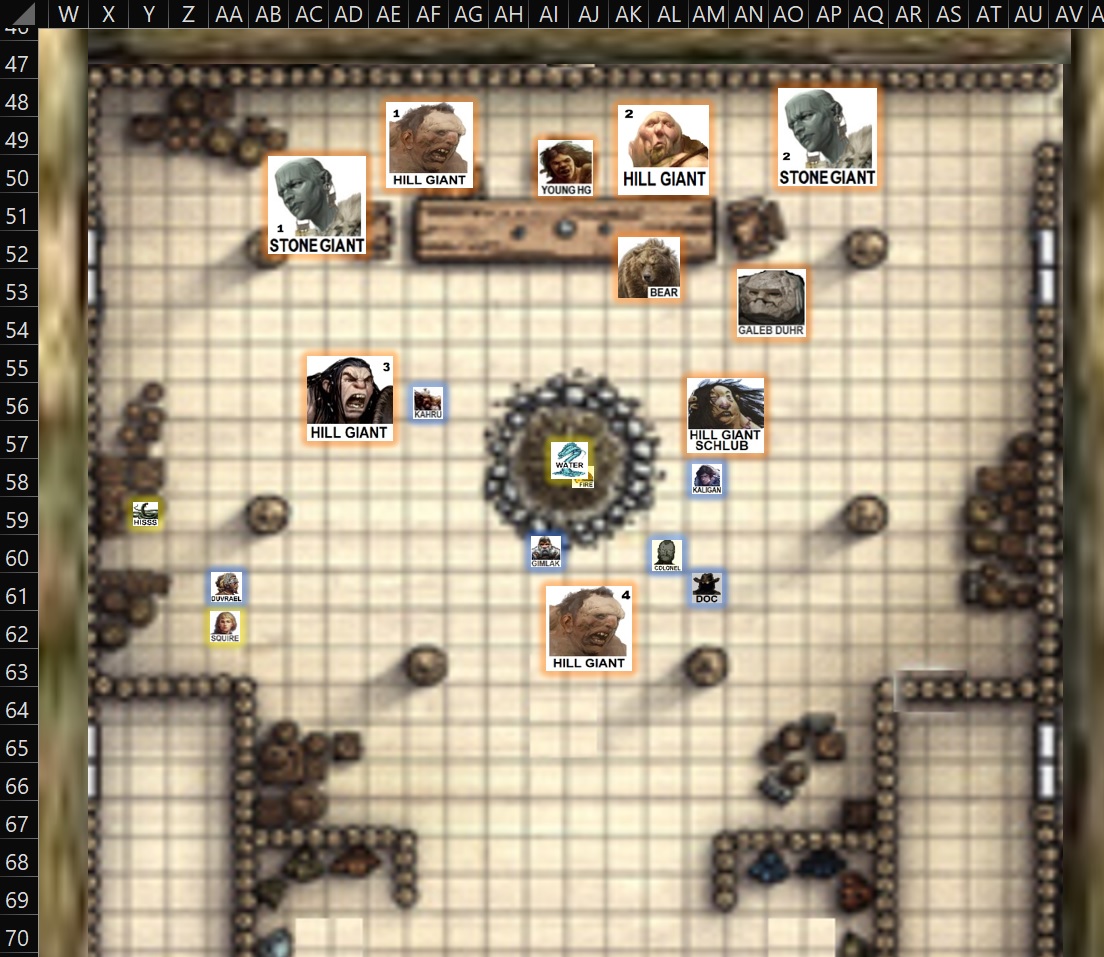 Gimlak stares at the hill giant next to him and strikes its mind. He then moves further south as he focuses his mind.

Supporter
The hill giant next to him wit the fearsome club seems to wince in pain, its brow squeezing in response to Gimlak's psychic attack. The Colonel uses that as an opportunity to slip away, and steps into the muddy ash of the fire pit, where he can more clearly see the two Stone giants.

Their taunts are haughty and self-indulgent, and the Colonel hopes he can teach them a lesson.

"Begone, both of you!" he says, and his empty hands close into two fists as he wills the two creatures away.

Doc scans the room, and seeing the weakened rustler, fires a quick shot to end 'em. Then he whirls around and fires at the closest rustler, before moving back a little to assess the room.

Kaligan see the giant in front of him fall and spins towards the giant behind him. He knows that a two front fight is a bad idea, so he moves with purposes towards the hill giant. Kaligan's sword bites into the giant twice.

Kahru spun, wielding Waythe, and struck the closest hill giant hard, causing her to stumble. She swung her club at him, but she couldn't get her footing to get any power behind the blows. Duvrael and Donnell joined in, as the wizard sent a flame that set her hair on fire, and the squire put an arrow into her shoulder. Both stayed well back, out of the way in the south-west corner.

Gimlak attacked the mind of another hill giant, causing him to rock on his heels while holding his head. The dwarf, Doc, and the Colonel took the opportunity to move away while the giant recovered, and Kaligan leaped in, his back to a pillar, as he stabbed the giant with his sword.

Doc shot the ugliest giant dead, and then turned his pistol toward the one Kaligan was stabbing. That giant was wounded, but managed to thump Kaligan with a club. Suddenly the boulder, that now appeared to be a creature, rolled across the room like a tumbleweed (but a might heavier) and it came directly for Doc, slamming into him.

The stone giants did not stay idle. They began to pick up their own clubs, even bigger and heavier-looking than those of the hill giants. They marched forward to join the fray, but the Colonel clenched his fists and they vanished. The old soldier threw himself down between the firepit and a giant's dead body, and for the moment was not noticed by the other combatants.

The young hill giant climbed under the table and tried to coax the bear out, but for the moment, they both just stayed there, while the biggest hill giant loaded his enormous crossbow and fired it across the room, striking Kaligan with the bolt with a powerful punch that threw him off his feet. 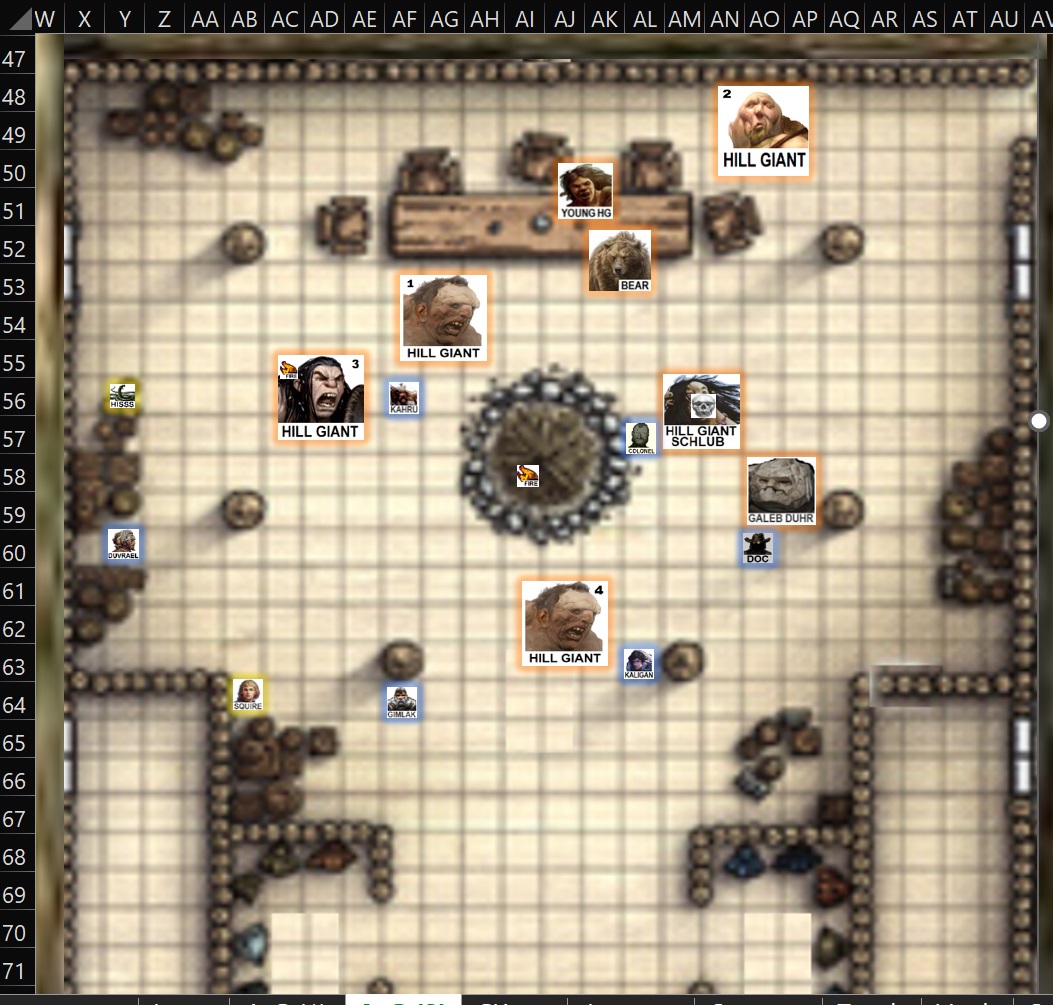 Kahru swung Waythe to bite into the flesh of the western guard, but not before the giant slammed its own club into him. The barbarian zealot could feel Waythes exhiliration and his own blood pumping through his viens as he swung back at her again, only to have a rock hurled into the fray, causing him to roll aside as another giant lumbered in

It was then that he felt Zealous rage blaze up in him, the enemy was upon them and the Zealot and his enchanted blade would strike them down with extreme prejudice!

“Rejoice good Waythe” he growled savagely as the approaching hill giant swung its heavy club down upon him “you will feast on giant blood!” Lifting a muscled arm up to catch it, the barbarian took the clubs blow, his mighty thews throbbing as he resisted the strike, shoulder muscles bunched as he parried and then made his own strike in return, thrusting Waythe up at the giants flank

Supporter
The Colonel stands and works his way along the body of the dead hill giant beside him, avoiding any incoming threats and maintaining cover where he can.

Doc was staring down the Hill Giant he just hit when, suddenly, he was knocked over by ... some kind of boulder ... that rolled over him, sending him butt over boots to the floor and momentarily making him Doc distracted from his wrathful enmity.

Quickly picking himself up and adjusting his hat, Doc channeled all the hatred the Sheriff provided him into a new focus on the stony varmint that dared interrupt his justice, but his two shots failed to hit their mark as Doc continued to curse a blue streak under his breath.

"When yer in a gunfight in the mesa, ya use rocks fer cover. Shootin' at rocks is folly. Might as easy shoot at clouds."

Doc couldn't remember the first time he'd heard those words, but they came to him now as his bullets sparked off the boulder's back. It unfolded and stood like a man, towering over him. Doc was able to duck to one side as a big stone fist swung over his head.

Perhaps the thing was like an armadillo; softer on the underbelly...

Gimlak's psychic connection to the alien entity outside continued, with strange thoughts and images flashing in the dwarf's mind. The creature was still under the effects of Duvrael's invibility spell, and had not yet been discovered. From what Gimlak could tell, the ogres were aware that something was there (they had tried to throw javelins at it, but it kept changing its position) but they hadn't learned what or where.