FYI, I've been trying to sit down and write my next reply, but my chronic pain has been kicking my ass. I have physio on Wednesday, so I'm hoping I'll be able to get it done after that if I don't power through the pain in the next couple of days.

Planning to update this game later on today. Right now, I have a headache and need a snooze (and a half).

Look for my next post either late Sunday or on Tuesday.

I will try to get a reply up for this game in next couple of days.

Okay, so I think it's time to roll initiative even though you can't see your foes at this point. The boar will act on Caerth's initiative.

Okay, so at this point, none of the PCs can see any foes but you know they're out beyond the smashed door. The boar stands just beyond the doorway out in the corridor. (I'm assuming Caerth can't see through the boar's eyes.)

Aureus has just searched for traps and found none. Caerth is just inside the door leading back up to the first level. Timmins stands next to him after just patting the half-orc druid on the shoulder. 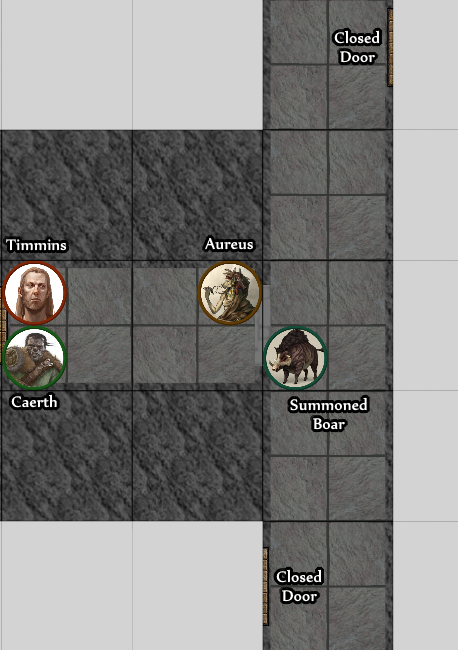 The grayed out areas are part of the Worldographer program known as the Fog of War.

@JustinCase, have the boar make a Spot and Listen check.