Okay, so my goal is to post replies for both this game and the Bluffside game sometime before the end of the weekend. I'm going to post for JustinCase's PC and then the NPCs. It might happen today, but tomorrow is more likely. Had to do some organizing of my room today and go through some of dad's stuff. It's hard every time.

Anyway, I need to lie down for a while.

Updated battle map for Round Six up to Angus's actions...

Note that neither Quinn nor Wieland can see the third cultist in the corridor to the south, as the man is just beyond the shadowy illumination. Brutus can see the man with his darkvision.

@Scotley, Phar is up next. He can see the centaur in the hallway from his vantage point and saw him shoot his bow (but not at Timmins or Meridith). Phar also saw Timmins reaction after Angus fired. You can have Phar make a Sense Motive [Hunch] check (DC 20) to get a feeling for the newcomer.

Phar knows a Harqualian centaur when he sees one, although seeing one here is... surprising. There are centaurs that come to visit the Kingdom of the Silver Leaves and there are a even a handful that live in the Great Forest.

Whoa, I missed the horseshoes of speed when looking over @Tellerian Hawke's PC. Yikes!

Hey some much needed luck. Will post after I see what he learned.

Well, since the Sense Motive check is a Hunch (your 21 is considered a 31), Phar is very sure that Angus poses no threat to the PCs or their allies. He seems like an affable fellow, although he seems a bit out of place in a dungeon setting. The language Angus is speaking seems similar to Common, but it is definitely a strange dialect. It isn't the racial language of the centaurs (Phar speaks that language and could reply to Angus using that tongue) and it isn't the Northlandic language of the barbarian tribes of the Northlands, which Phar has heard but doesn't speak himself.

Below is what Phar knows about Harqualian centaurs...


(In Phar's study of geography and nature, he has read a lot of texts about the Northlands and listened to many of the oral legends and stories of the Northlanders known by the silver 'wild' elves -- cousins to his people. Harqualian centaurs often visit Silverleaf and Phar met several centaur traders and warriors as a child.)

Harqualian Centaurs live in the forests of the Northlands (north beyond both the Great Forest and the Greystone Mountains) and are steadfast allies of the humans known as Northlanders living in Harqual's arctic lands. For as long as those peoples have lived on Harqual there have been Harqualian centaurs living alongside them, or at least that's what both the Northlanders and the centaurs say when asked about their shared heritage.

All Harqualian centaurs have thicker hair than centaurs of other lands (and worlds) and the human torso part of their body is covered with hair front and back. Males often have thick beards, which are usually kept braided and their long manes are always tied up in a ponytail. Females do not have facial hair and their manes are left loose to blow in the frigid winds of the Northlands.

Harqualian centaurs are stout warriors will defend their homes and kin without any hesitation. Of course, since they are strong allies with the barbarians of the Northlands, almost any conflict that continues for any length of time will eventually draw in their barbarian allies as well.

Phar knows that Harqualian centaurs have the innate ability to produce a ray of frost spell-like ability. They have darkvision and have tough skin (+2 natural AC). They have a tradition of rangers among their people.

With both Phar and Maur's attacks, the prelate falls.

The two new cultist combatants enter the fray. One chooses to step to move 5 ft. and attack Quinn while the other moves and casts a spell at Brutus and Quinn.

I'll post results in the IC thread in a bit. Lunch first.

When you said "lunch first" I had a flashback to The Princess Bride:

Round Seven
@JustinCase is up first, but I'm thinknig he's not available right now. I hope he's doing okay. Anyway, I'm gong to wait a bit to see if he responds before posting for Caerth.

New combatants come in again in this round just after Wieland.

The PCs (and Aureus) all get Listen checks to hear the sound of more footfalls coming down the corridors. The -10 penalty for the sound of combat applies to the rolls, however.

I've decided not to add the +15 for listening through a stone wall for the last three characters since sound seems to echo through the temple's corridors. And the sounds of battle are enough of a hindrance.

Since Wieland isn't truly engaged in the fight at this point, he will also get a Listen check at the same DC as Quinn.

Starting positions as of the beginning of Round Seven... 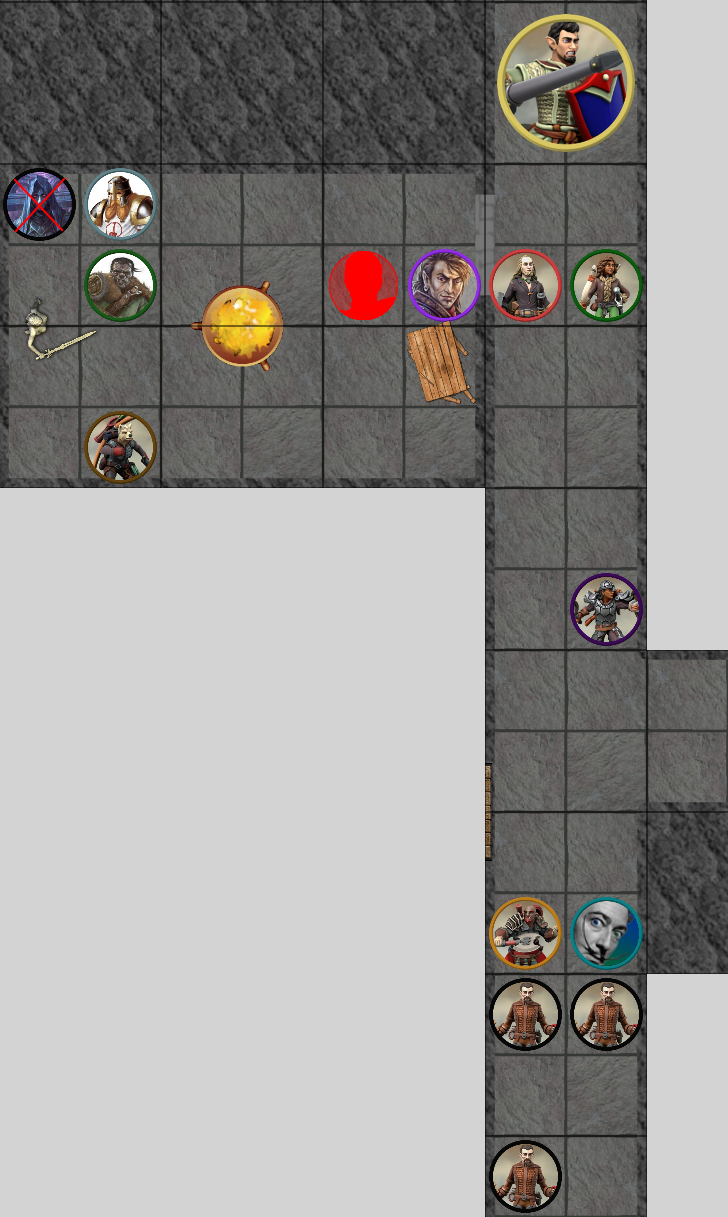 None of them hear the footfalls of the approaching cultists.

Brutus, Timmins, and Meridith are too distracted to have any chance to hear anything.

The light in the brazier room is considered shadowy up to the center of the brazier . The last 15 feet is in darkness.

@Knightfall Then Angus has a 9.