5E (IC) Rise of the Dracolich

"It's what I do. Let us make the most of theis opportunity. We may not get another soon."

Mord passes on the bath only if the party can't find a way to suitably heat the water without causing an issue with the toads or dangerously warming the ice of their chamber.

Once gettled down, he prepares a ritual area to help determine and identify any magical items they might have picked up since their arrival. And also a spell to allow him to read the markings on the wall in the queen's chamber.

Later, he sleeps fitfully, exhausted by his study late into the evening and his recent-if-healed wounds. He cries out a few times in his sleep and if at any point anyone attempts to calm him, they find that his eyes are as black pits, even in the semi-darkness of the chamber in which they sleep. They soon resort to normal, as he comes fully awake, and he shrugs off any concerns they might have.


I know nobody stated they were even searching the kobold bodies, but Mord definitely asked them to. If they had anything remorely interesting he'd want to collect it to check later.

He can't talk directly to the queen, but if Primus decides to join him he'll definitely try to gather any useful information that he can. Assuming she stays awake to be talked to.

Kalorn takes the first watch, and then retires to sleep. He sleeps fully clothed, wrapped in his cloak but with little effort to cover himself further. He sleeps clutching his sword on his chest, but tonight he is holding two blades, making it even more awkward. But yet he sleeps.

In his dreams he is falling into darkness, pass impossibly immense trees. Besides him a huge cliff, lit by the Purple Moon. On it, painted in some dark liquid, are the runes, scroll by so fast, that taught him the secret. There are news lines now, in a darker tone... what foul magic was he being shown! But he was falling too fast, he couldn't read anymore. The ground rushed up and!

... his eyes snapped open. His leg ached and twitched. He let out a long breath... what now? How long before the secret would reveal itself to him, unwanted?

Supporter
Alhana makes herself as comfortable as she can and rests.

Chilled, but otherwise rested, Imani's Agents rose as the colour of the ice shifted from dark blue-white, to a slightly lighter white-blue. The toads had worked late into the night and were sleeping as the group made their way to leave. The queen appeared to still be on her "throne' (a platform of ice and various oddities), but now she looked nothing more than a very large frog-like creature, sleeping.

Two guards stood by her, though, and they nodded to Imani's Agents on their way past. The group moved slowly up the large winding tunnel to the work-room, where the worker toads also slept, their backs just visible from various cubbies and crevices. Mord took one last look at the strange markings, unintelligible now without his spell - but he had learned much about the seasonal shifting of icebergs in the Sea of Moving Ice, and some curious information for a later day about things that could be found among them.

They left the work chamber and returned to the circular corridor. Moving counter-clockwise, they came to the tunnel the trolls had said led to their lair. It occurred to the group that they could fetch the trolls to take them to Maccath the Crimson, or they could search for her themselves.

Upon waking, Kalorn did the usual - putting on his armor immediately then doing his morning stretches. He then starting doing practice swings with the new sword they had found - strikes, parries, guard transitions, counter attacks. He frowned. The blade was wider and less stiff, more of a cutting weapon. That he could get used to. But the grip was too short, he couldn't get leverage. How was he supposed to use this thing? Ah, the pommel. The ball-shape wasn't an indication of the lack of skill of the blade-maker, it was meant to be used. Shifting his grip to hold on the pommel with this left hand, he repeated his exercises. Better.

He put the sword on the ground, and slowly passed his hand over it. As he did so, the blade vanished into thin air. He got up, and adjusted his other sword so that the Nail would now be strapped to his back - out of easy reach, but also out of the way. He smiled, and the wide blade reappeared in his hand. He took a few more swings - much more powerful and assured.

"I am ready to use this blade at last. If the trolls betray us, there will be hell to pay. Let's go find our informant".

Mord awoke slowly, there was a glimpse of blond hair at first before he reverted to his usual black everywhere. It was harder to hide in this constant near light. But for some reason, the warlock looked grumpy as he performed his daily preparations. Frowning, he studied the tome that he used for his rituals, but couldn't quite seem to find the answer he needed. Then, with a sigh he performed one of his rituals.

After a momentary pause where everyone appeared to ask, "are we really going to do this?", Imani's Agents descended into the troll's chamber.

At the entrance, nothing could be seen or heard but the howl of wind and running water. They moved through into a deep cavernous chamber filled with a drifting mist that shrouded a field of ice pillars that rose from floor to ceiling. Deeper still, the Ice pillars formed razor-sharp crags that loomed out of a roiling fog. Streams of crackling water, magically flowed in spite of the subzero temperatures, coursed thickly through the hollows beneath a wind-driven, icy snow that blew from an opening far, far above.

The muffled silence was broken only by the sound of running water and the sharp howl of the wind as it blew through the opening above. The path descended into the water.

Mord telepathically directs the troll skeletons to march on the flanks of the party while he himself remains centered as much as possible within the group.


I just realized that Mord has had a short ranhed telepathy all this time with Awakened Mind from his GOO pact.

"I don't think I need to tell you that this is an excellent place for an ambush. I don't like this. The mist, the water, the opening above... Let the trolls show themselves, we should not step into this .... chamber"

"I could send Sooty ahead" he added, a bit dubious.

With a gesture, Lorenn invoked his magical armor. "Don't worry, I'll survive to tell the story." Then, he ran his hand along his blade which start emitting a warm but powerful light.

Lorenn's blade illuminated the water, but the thick swirling fog made it nearly impossible to see. There were several splashing noises, and Imani's Agents realised that they were quite surrounded (how a few trolls had gotten behind them was difficult to determine).

From out of the fog loomed the lead troll from the day before. Fortunately, he held out a hand and said, "We trollz are wit' yoo. Ol' Icy-Death no longer rules 'ere. Yoo helps us, an' we helps yoo. We smashim togedda!"

Several cheers from the fog around revealed a sizeable number of trolls.

Sesto was pleasantly surprised to hear that the Trolls were actually going to help them rather than fight them. Excellent!
He greeted theTrolls in their native language: Great Warriors! Let Us Fight This Day And Be Victorious. Sesto gestured with his hand for the Troll to lead the way to Maccath: Show Us The Way.

Sesto had a good feeling about this. Last night, he had a refreshing, albeit very cold, bath before a long well deserved rest. He woke early for Lauds and prepared his daily spells. Lathander's voice said nothing about the zombies he had created. Was that good or bad? Sesto wondered. Maybe Lathander wants to see where all this is leading? Nevertheless, Sesto had prepared himself for the day. I just need to remember to maintain my zombies on a daily basis.

The lead troll rose up out of the freezing water and made his way up the tunnel to the circular corridor. The other trolls stayed in their cavern preparing for and awaiting their summons to battle. When the lead troll passed Mord's skeletons, he stopped and said to one of them, "Aye, bruddah. Eye be smashin' dem when dis is doon, iffing dey doont leave. Yoo jus wait. Yoo kin helps us still t'smash Ol' Icy-Death. Den Eye, Oggsbruff, will be King of Oyaviggaton! Yoo be so proud. Eye will smash yoo an' put yer skull on me throne. Yoo will see."

He nodded his satisfaction and led the way up a gradual but steep icy slope to a higher side-tunnel, then through that to a large, empty chamber, where stood one lonely troll guarding a further upward-leading tunnel. Oggsbruff nodded to the guard, who walked away, eyeing Imani's Agents with hungry curiosity.

"Red Horn-Head be oop dar." said Oggsbruff, gesturing to the small tunnel leading up. He would have to stoop to go up, and so he chose to stay where the guard had been in the large empty chamber. 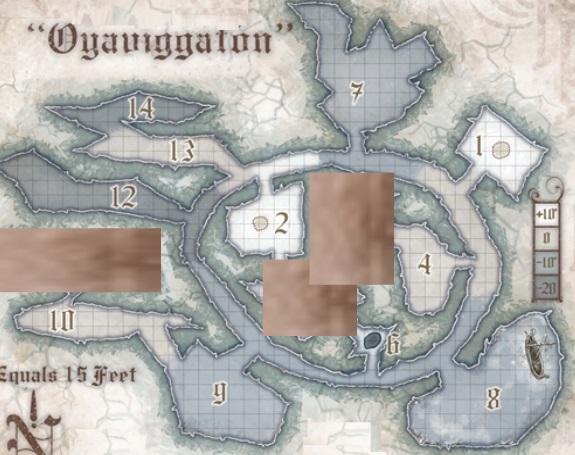 Mord smirked quietly to himself as the troll stopped to address his former companion. He telepathically commanded the skeletons to stand a little bit taller as they were being addressed, as if they recognized their leader. And as he finished speaking they both gave what Mord hoped would be taken as a salute.

Once they reached their destination, Mord commanded them to stay back with the leader troll and guard the passageway. Then he took a place at the back of the line.

He palmed his sending stone."Imami, we are about to ascend to the chamber where Maccath the Crimson is being held and forced to work for the dragon's minions. I don't suppose you would have any information on her abilities which we would need to know?"

Mord had seen how the other trolls had reacted to their leader and was able to make the skeletons perform in a similar way. This seemed to please Oggsbruff, and the big troll continued to talk to them as if they understood.

Imani's voice came through the sending stone, "I am pleased to hear that you have discovered her whereabouts! I hope that you find her in good health. She is a Tiefling mage and scholar, an expert on dragons and their magics, and she has made a study of dragon-related artefacts. I would be wary, if I were you, to cross her, but I have found her a reasonable person to speak with. If she has been held against her will, I suspect she will be very grateful to see you."

"Understood, we will contact you once we have her freed and some time to discuss matters."

Kalorn watched the troll speak with the skeletons warily - what was this? - but decided to pretend as if he didn't noticed. He noted faintly at Mord to let him know he knew something was up.

"Keep an eye on the rear Sooty" Kalorn mentally commanded, and the little bat fluttered into position.

"Well, let's get on with it. I shall take point, although Loreen, if you could check for traps, it would be appreciated..."

Altought it happened several month ago, Lorenn still had in memory the last magical trap he tried to disarm in the Baal temple.
"Well...""It looks good to me." he said, scratching the scar on his chest.

"Maccath the Crimson. We come in peace"