FYI: I'll be on holiday for the next two weeks, with extremely limited internet access. Feel free to NPC my character.

@Scotley, you're up for Phar.

I will try to get some replies up today. Still trying to wake up. Very bleary-eyed this morning.

I find a liter of coffee indispensable for waking up.

I'll add my posts for round 3 later tonight (or tomorrow). I'm dealing with a lot pain today. must go lie down.

One of the remaining three cultists runs away down the stairs (failed a morale check), and the other two cast shield of faith of themselves.

@Scotley, you're up for Phar.

"Hold in the name of Moradin!" Maur calls after the fleeing cultist


Started to. Then remembered that I specified what O prepared, but I cannot find it. I believe it was undead hunting...Will search tomorrow. G'night

I'm back! Good to see that 'Rocky' manages to hit one of the cultists! So proud.

Will try to get a post up for this game too. It's going to be uncomfortably hot here in Edmonton over the next few days, at least, so it might be tomorrow or maybe Thursday. It won't be Wednesday; I have physio that day.

Okay, so that is the end of round three and could be the end of the combat if the group decides not to go after the fleeing cultists.

Chasing after the cultists seems prudent.

By the way, do you have some sort of visual for which PCs and NPCs are caught in the range of that blast? I'm having a hard time seeing that in my mind's eye, and it makes it difficult to decide what my character can and cannot do. And his summoned elemental.

No, I didn't come up with a visual for where the PCs and NPCs are standing. I just eyeballed it in my head. I admit I forgot about the summoned elemental, but I don't think it would be in the blast range. When Brutus jumped he likely would have come down either next to the elemental (on it's right) or in front of it.

Thinking about it more, both Timmins and Maur might be on the edge of the blast (and not actually in the range), which is 5 feet around the spot where Wieland in standing. The cultist is definitely in the range and so is Brutus.

Anyway, I'm just letting you guys know I'll be away from my PC for the next couple of day. I have to go over to my mom's and help her with some stuff. The apartment has been sweltering this week and I need to spend at least one or two days sleeping in her house's basement in order to feel normal again.

I'll probably be home by late Sunday but it could also be early Monday by the time I get home. I haven't decided yet.

That's fine, I just figured the elemental would've been inside the radius. I'm fine (of course) if it's not.

FYI, I want to finish up the doppelganger fight for the Bluffside game before coming back to this one for the next encounter.

Created this so you know where your PCs are and where the various NPCs are located. Note the fleeing by the bottom of the stairs. I was able to judge that's bout where he'd be. 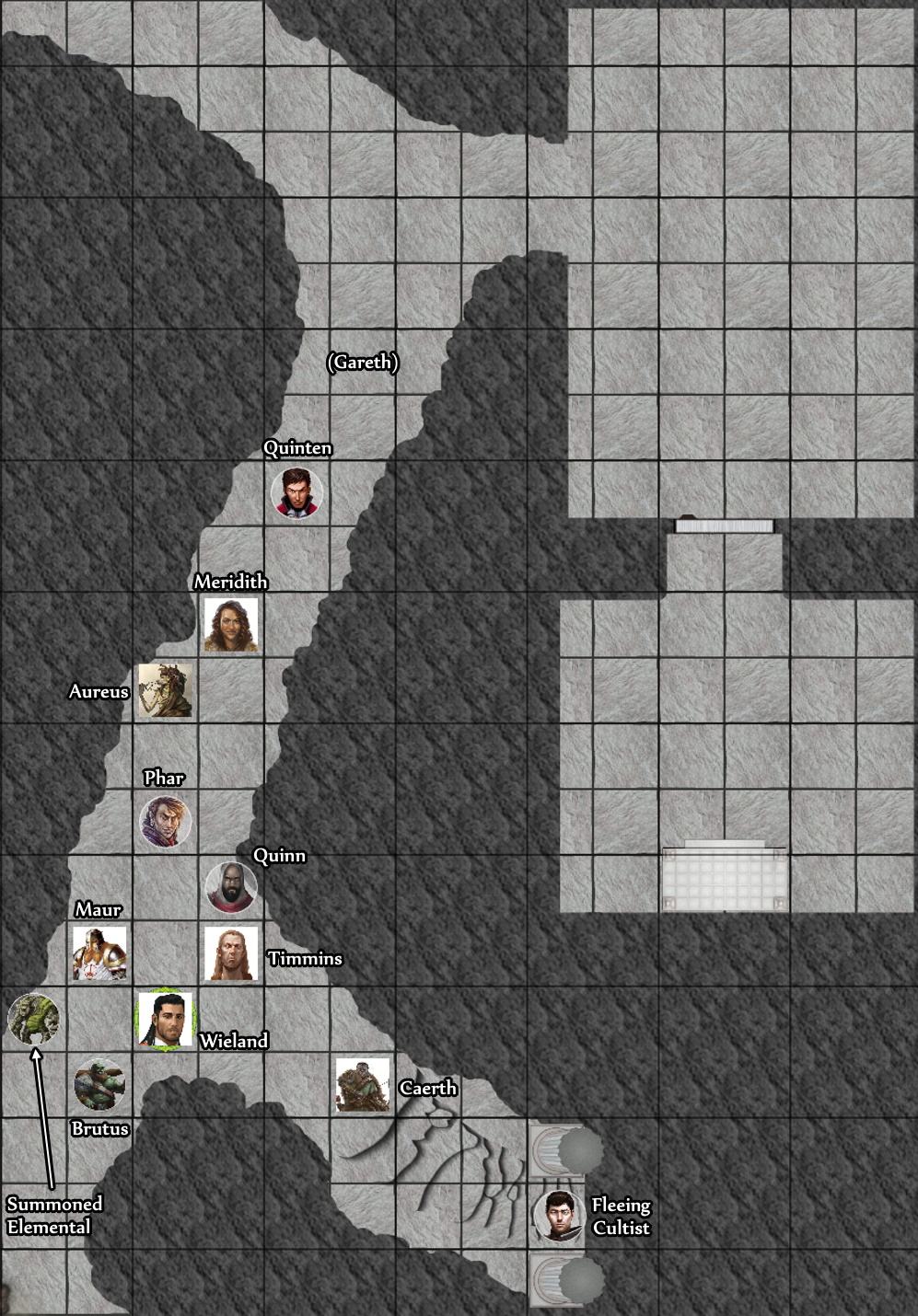