Glad to have you join us Tellerian Hawk. Welcome!

Good to be here! My character is done now, so I just need the DM to write an intro post for me. I can't wait to mix it up against the cultists!

Two new cultist foes come into the fight right at the end of round four. They come down the hallway from the same direction as the defeated ghouls.

Until then, the only two foes remaining are the prelate and Pritchard. Neither Caerth nor Maur can see the new attackers, as they are in the room with the brazier. All the other characters can see them once they arrive, assuming none of the characters try to follow Maur into the room.

Quinn is getting up from being prone this round. He will not make any other action. Wieland won't movw to attack, as he is continuing to hold up the torch so the other humans can see. Brutus will follow Maur's instructions and move away from the doorway towards Pitchard. Aureus will likely try to get into the room with Caerth and Muar.

@Scotley, you're up. Then comes @Neurotic's attack for Maur. Both of you feel free to post your actions.

Note that the new combatants haven't appeared yet. Right now, there are only two targets: the Prelate and the cultist named Pritchard.

@Tellerian Hawke, I'm going to say Angus arrives on the scene in Round Six! Roll initiative!

I will post an introductory post for you before we get there, but it won't be today. 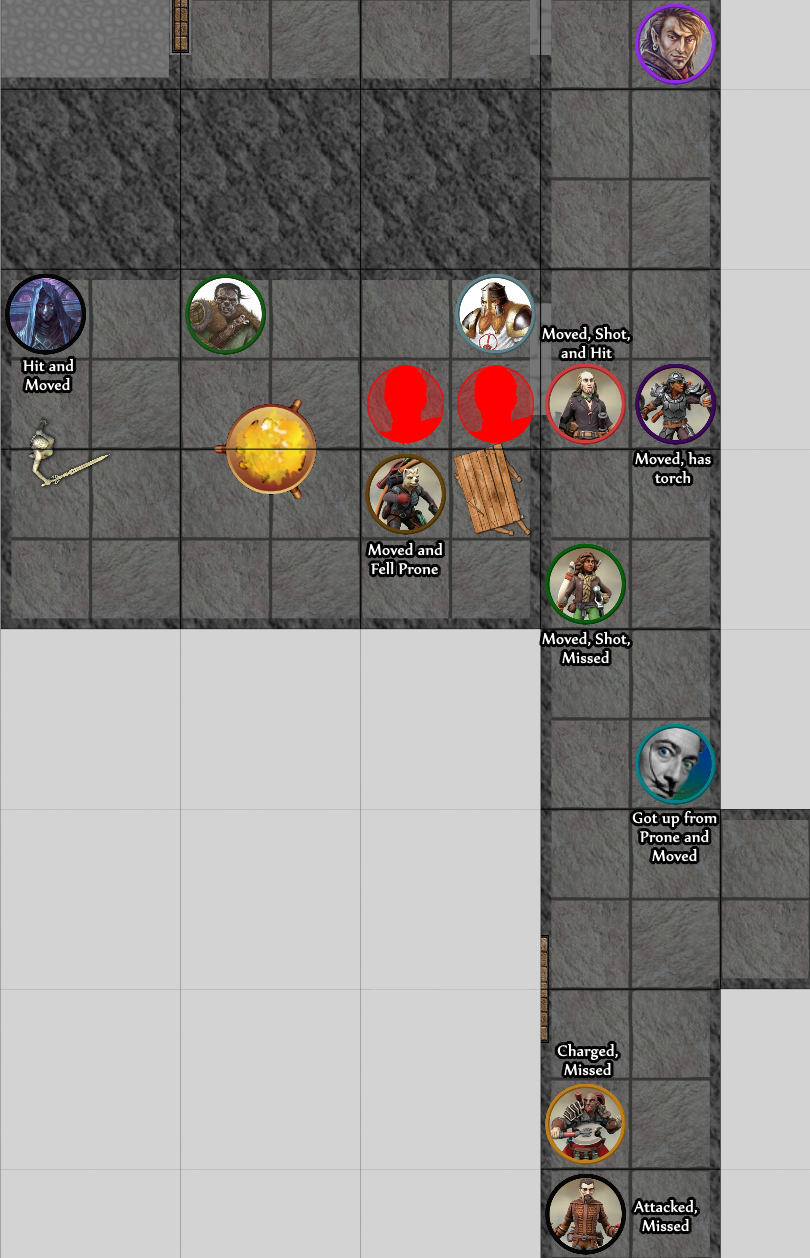 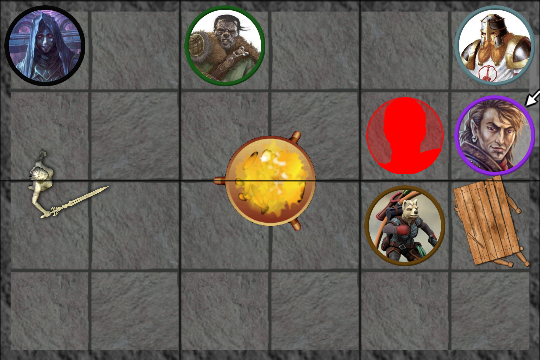 I'm guessing the damage didn't drop the priest. So, I'll have to. How wounded is he? Barely standing or looking healthy and willing to take more punisment? Asking for a friend

Neurotic said:
I'm guessing the damage didn't drop the priest. So, I'll have to. How wounded is he? Barely standing or looking healthy and willing to take more punisment? Asking for a friend
Click to expand...

Maur can tell the prelate has taken considerable punishment, but the man doesn't look close to death at this point.

End of Round Five 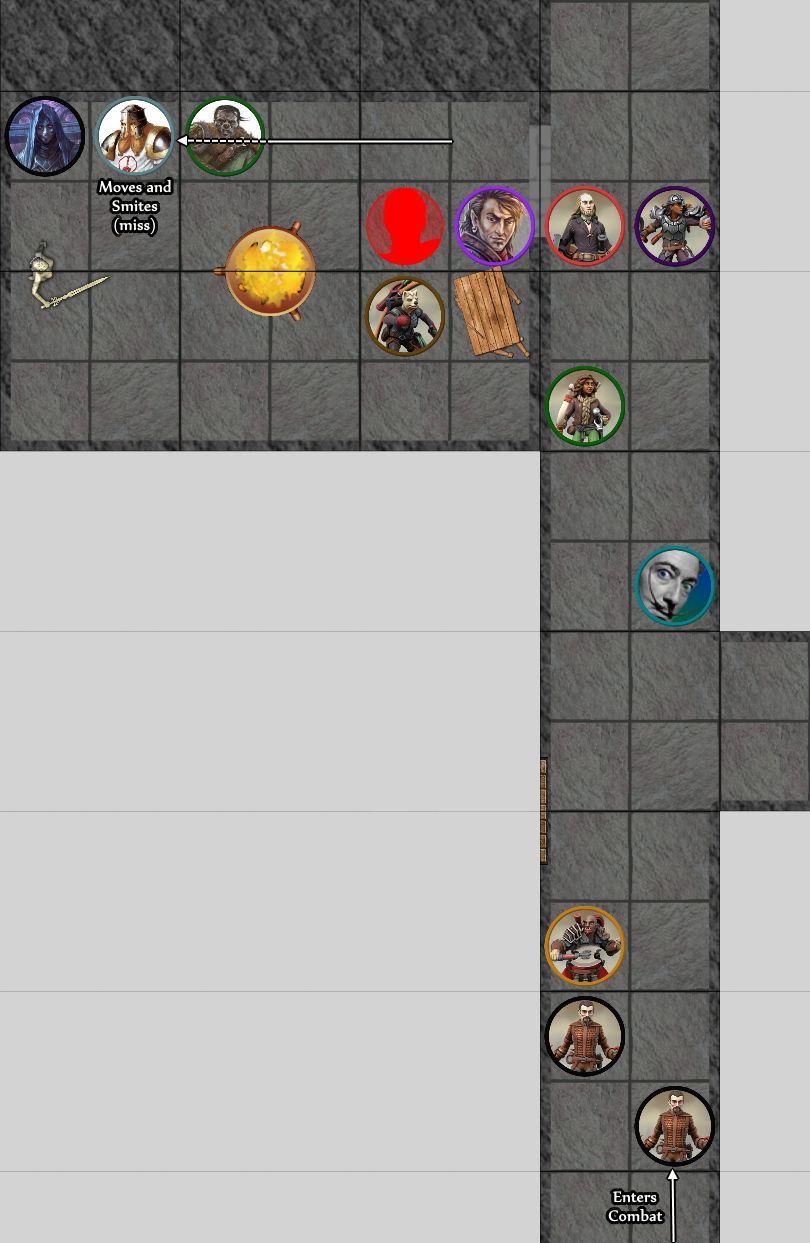 Here is the revised battle map for the start of Round Six. This is mainly for @Tellerian Hawke's reference. Angus enters the fray in this round at the position just outside the entrance to the second level of the Temple. He has had to fly to the island using the ring Aeron lent him, navigated the tight conditions of the tower above the dungeon, entered the first level of the temple, and found his way down the uneven stone stairs to this level. He's a bit tired and sore from to squeeze through some tight passages, but he's not taken any damage. (It was really hard getting down the five foot trap door (while flying) to the first level of the temple; Aeron had not told him to expect that challenge. [The hedge druid didn't know.])

None of the PCs are expecting him, and the NPCs fighting alongside them won't expect him either. Caerth, Aeron's charge and pupil, has heard of your PCs from some of Aeron's stories but will be very surprised by you showing up. Expect some suspicion, as Harqualian centaurs aren't commonplace in the Strandlands.

On the battle map, the villains are noted in red. The PCs are noted in green. And the PCs' allies are noted in white. I have noted the light from the torch Wieland is carrying as it is for the NPCs without Darkvision or Low-Light Vision. I've reduced the shadowy illumination near Angus due to the light having to go around the corner. The doors and open doorways are about 5 feet wide with an open doorway without a door being a bit wider (about 7-1/2 feet). Angus will have to squeeze through openings with doors but any doorway where the door has been ruined, he can get through just by ducking his head.

When Angus arrives at the spot on the map, he can hear shouting and the sound of clanging metal, but he can't really determine where it is coming from. I'm going to write an intro for you now, and Angus will act just before Phar and Maur.

@JustinCase, round six has begun. Muar's smite against the prelate was unsuccessful.

FYI, the prelate is fighting defensively this round as is Pritchard.

Fixed my post IC to reflect Dhaoninean instead of Northlandic.

Added map to my roleplay post to indicate position of smashed door.

@JustinCase, let me know if you need me to NPC Caerth. I have physio on Wednesday, so I wouldn't be posting until Thursday, regardless.