Angis wanting to mount the crossbow on the roof made me have to think about what the roof looks like. It's a fancy elvish tile with lots of curved lines. Angis stuffed a bunch of hay from the stable into the space between the north guard room and the gatehouse, and added another few bales in front for protection. He spiked the crossbow mounts into the roof (too bad - someone can repair it later). It's a rush-job and won't hold up to, say, a large creature trying to pull it down, but he can fire with it stable enough. 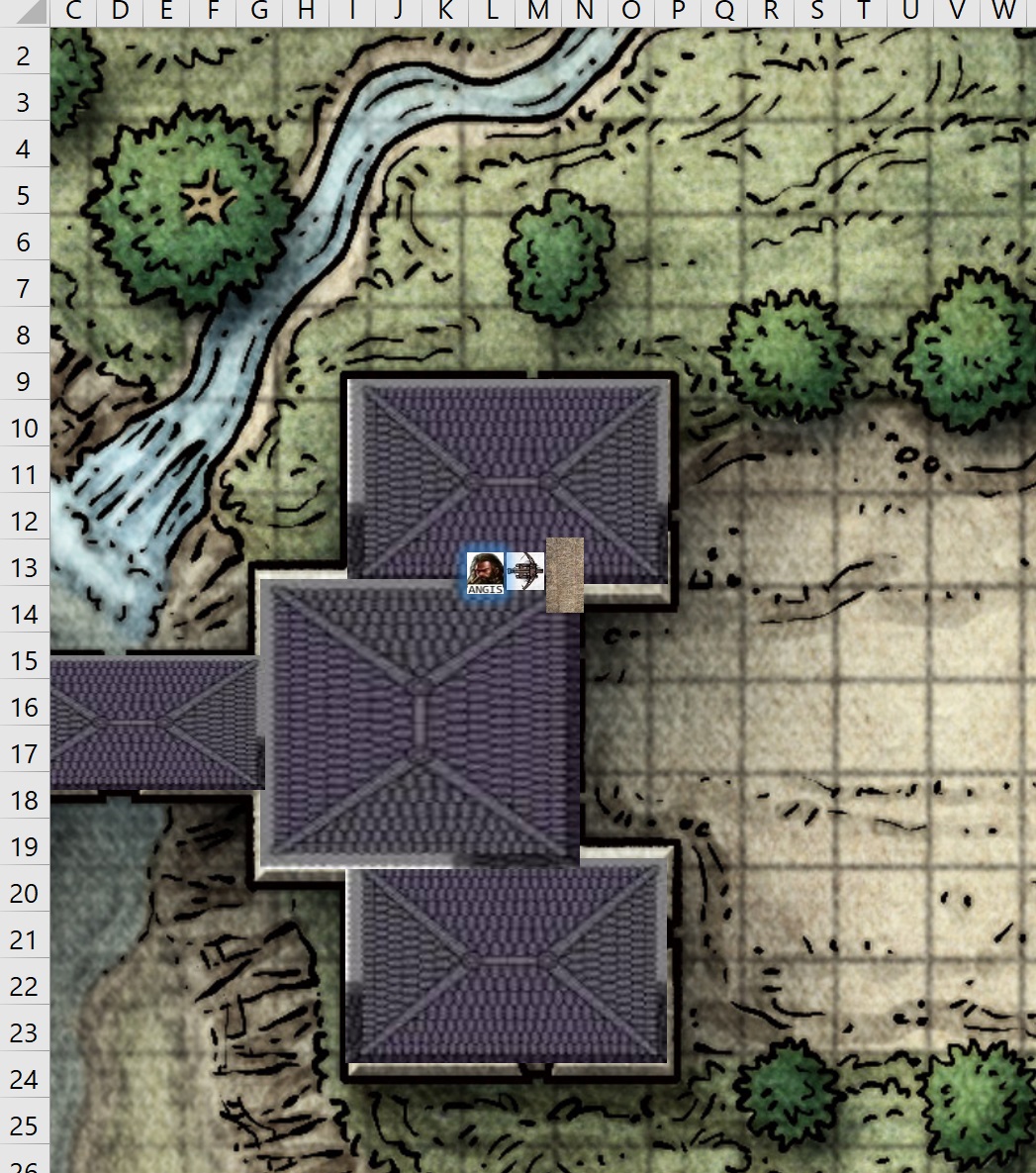 I didn't mean for it to post so big. Thinking about it, Angis might want a quick retreat: That corner of the roof near the waterfall would be quite the drop (nearly 20 feet, to ground that's steep). He can load some more hay over there for something for him to land on in case of retreat. If it happens, it'll take an athletics check to jump down without hurting himself, but Angis ought to be able to handle it. Besides, if he leaves the roof, it'll probably be to heroically jump onto someone at the gate.

How would he get up in the first place? Is there roof access? If not, I imagine he might have chopped out some of those tiles to open a hole to climb through? Basically, is there a retreat inside or not?

KahlessNestor said:
How would he get up in the first place? Is there roof access? If not, I imagine he might have chopped out some of those tiles to open a hole to climb through? Basically, is there a retreat inside or not?
Click to expand...

No he probably climbed up from outside from the roof of the war wagon while getting the crossbow off (which was then pushed back in and sealed up behind the hidden doors.)

Sorry to be out of focus for a few days. I'm back now. I think Tommi is absolutely going to try to take the back exit. IC post incoming.

So... Is Tommi and Escella going to run forward for a quick scout? (I assume those were the rolls that @Kobold Stew gave me, but they were just as good for getting up the Waterfall Safely and unseen!)

If so, I guess I'd like a second set for Tommi, and a set of rolls (described a few posts back) from @jmucchiello Escella. @Prickly Pear Lionel can go too if he's feeling brave! (Angis is busy with the crossbow, and Dandin's probably finding a spot for his bear, but he could go if @gargoyleking wants him to).

Otherwise, I'll just skip forward and we can start a combat.

Oh, I so wish Escella had heard that elven drivel.

I believe only Dandin speaks elven...assuming of course the elves speak elven with one another

Neurotic said:
I believe only Dandin speaks elven...assuming of course the elves speak elven with one another
Click to expand...

Yeah, they probably do.

LOL Angis had some choice words pass through my head, too, but alas, he is on the roof LOL

Just to confirm (and apologize for not saying it clearly) - yes, Vairar speaks elven with the sargeant

Dandin does speak elven as well, and would probably have done so if for no other reason than to get Angus riled up.

You all know how I like to run little encounters. Here's another small one. [/self-deprecating-sarcasm]

1) The line about Escella and Tommi being out-of-breath is fluff, no exhaustion.
2) Angis is 30 feet to the right of where he appears to be (at L13). I had to move the roof back so we could see inside.
3) It looks straight, but the road curves to the south right as it leaves the map. Even though you could probably shoot further, this is about where the orcs come into view.
4) Escella and Tommi have probably been in sight for at least two rounds, and have let you all know what is coming.
5) Feel free to jockey for positions around the arrow-loops if you need to.
6) If you're a cleric or bard (ahem, you know who you are) and you want to give out some pre-round buffs, just let me know what they are. (Same goes for Escella - she may have already cast Expeditious Retreat, but just hasn't left Tommi behind yet).

PS. One way to use the arrow-loops for multiple people will be to move up to them, do your action, then back off. @Neurotic can have the Elf Guards do that too so that no one is monopolising their use. They will provide +5 AC, but it's still possible that someone might get shot through them! If I happen to manage to shoot you (which isn't really all that likely), and you feel like you should be behind the wall, just remember, that the orcs probably fired when they saw movement beyond the arrow-loop. (This of course, only pertains to me shooting at you IF you used the arrow-loop to shoot at them. I hope you understand what I mean and that it makes sense to you.

There was no time for exp retreat if they're that close. I thought they were much further away. Otherwise she wouldn't have gone out.

5. Given the movement rules, people can easily share an arrow slit. You step in, fire, and step out.

The gatehouse is two stories, right?

jmucchiello said:
There was no time for exp retreat if they're that close. I thought they were much further away. Otherwise she wouldn't have gone out.

5. Given the movement rules, people can easily share an arrow slit. You step in, fire, and step out.

The gatehouse is two stories, right?
Click to expand...

I'm not sure you understood my post. Escella and Tommi went several minutes out and back again. They didn't start out that close. They were just moving quickly and overtook you on the way back. (Well, they didn't totally overtake you, you're still ahead. They just caught up enough that this is where everyone is at at the point that Angis and the ranged attackers can start firing at them).

As you can see, the road is exceptionally wide. (It narrows as it leaves the map - it's not seventy-feet wide for very long). I chose to interpret it as extremely arched - it's higher in the middle than on the sides. The two side-towers are two-stories (a stable below the south tower, and a shed below the north tower). The middle-part, the main gate, is only one floor, but it's level with the second floor of the towers, if you see what I mean.

Sorry, I started my post before you posted the fight intro. LOL wanted to get it in. Dandin really doesn't like being disparaged.

gargoyleking said:
Sorry, I started my post before you posted the fight intro. LOL wanted to get it in. Dandin really doesn't like being disparaged.
Click to expand...


Yeah, I know you had a post on the go earlier that got lost.

How would the Orcs have gained ground on us?