Merin will look carefully around the cave, investigating, looking for any clues he can find. Then he has an epiphany: he wonders if he could reach out with his mind, by manipulating waylines, to find psychic impressions left by whomever was here. ~If we are all connected, then there should be some merit to this idea.

Merindell is not much of a diviner, but the idea is sound. Sheldon helps him, walking around the cave and dragging his hands along the walls. If the possibility of mystical residue exists, neither man has the skill to detect it, much less read it.

"Looks like we will have to do this manually."

Merindell: 30(observation) + 0(nothing applicable) + 78(d100) = 108
Sheldon: 50 + 52(enhanced vision) + 75 = 177
Exploring deeper into the cave than the location of the previous combat, it is obvious that a natural cave had been modified and expanded, but as to what intent or purpose is a matter of conjecture. Importantly, two additional exits are located.

Outside of the one farther to the west, Sheldon locates some evidence of people having recently exited the cave and continued somewhat northwest. Merin can recognize the prints after Sheldon shows them to him. It looks like four people, two light of foot and two burdened made several trips in and out of the cave.

Following the line of the trek, a small burn site is located. The fire was well maintained but too large to have been for cooking. It seems reasonable that materials from within the cave had been destroyed. With the day waning on, it is decided to camp near the burn site. Sheldon asks, "Do we want to follow this trek and see where it might lead us, or do you have another idea?"

Merin tells Sheldon that he'd like to follow the four sets of prints, to put an end to this business, once and for all.

Merindell: 30(observation) + 0(nothing applicable) + 132(d100) = 162
Sheldon: 50 + 52(enhanced vision) + 75 = 177
The trek cannot, specifically, be followed, but some reasoning is used to travel in what seems a pertinent direction. No sign of switch-back or diversion is discovered. What is estimated to be about half a days distance as the crow flies, takes the men a full day traveling through the forest. This brings them to the Western Road, without the interference of a hostile encounter along the way.

Sheldon runs his left hand through his hair, pulling it back from his face. "There is no way we could discern a definitive print along a main road; but based on the angle they were traveling though the woods, I think we should continue West. What say you?"

Merin replies,"West it shall be."

Merindell: 30(perception) + 193(d100) = 223
Sheldon: 55 + 75 = 130
Following the logic of their reasoning, the two men adjust their clothing from the trek through the woods and orient themselves to walk westward along the road. About one hour into the walk, a large stag walks from the trees to the north of the road, about 30 strides up the road. The deer, possibly an elk, is completely black of fur. It stops in the road and stares down at the two men for about two full seconds before continuing on it way, across the road and into the trees to the south.

Sheldon turns to Merindell. "What do you make of that? I have never even heard of a deer that large, especially one with black fur."

Merin looks puzzled; "There's no way that's natural. This has to be some sort of a sign or an omen. I think we should follow it, discreetly, at a distance, and see if it's trying to lead us somewhere."

Sheldon nods. "I was thinking the same thing, especially with that odd color."

The two men, discretely, attempt to follow the stag, but as soon as they have stepped from the road back into the woods, no sign of it can be seen. The men move back and forth searching for some indication of the path it may have taken but nothing is found. After some discussion it is decided that the men should return to their mission at hand.

The road, at some time in the past, had to be cut through the trees. The forest here is not the towering conifers of the Windy Coast. It is a mix of conifer, nut, and berry trees, the berry trees being clumped in sunnier patches of the understory.

Sounds of civilization can be heard much farther than any indication can been seen. By late afternoon, the men finds themselves entering more of a town than a village. The town is fairly centered around a natural ford in the river that has been modified to be shallower and more accommodating to being crossed.

On the East side of town, the direction of approach, the most significant structure looks to be a temple that has been constructed from smooth stones collected from the river and held together with mortar. It is the only stone building. Everything else is constructed of timber, the most readily available material. Adjacent to the temple is a plaza area that is being used for trade. The temple and plaza are on the South side of the road.

On the North side of the road is a tavern, alive with activity. There are several other larger structures, as well as smaller ones, on both sides of the road. More buildings of various sizes can be seen on the West side of the river.

The town occupants are mostly Spiofthests and Markidians. Because of this, Sheldon and Merindell look as if they could belong, for their coloration matches those of the residents, but their species is exactly backward. No one at a glance tends to pay that much attention. The spoken language, however, will pose a problem. It is definitely not Centrin. 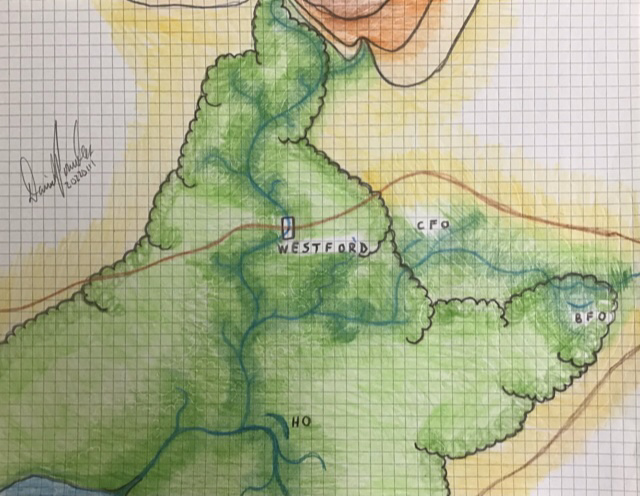 Merin stands still in the middle of the concourse, pretending to speak to Sheldon. He listens intently, trying to overhear nearby conversations, scanning for any language that he recognizes.

As the two men stand, sometimes conversing, sometimes only pretending, it comes to the realization of each that Aedaman, who are of the Markidian tribe, an unfamiliar people, speak one language. The Spiofthests, a tribe of Faethrins familiar from their residency in Boga City, speak another. Both tend to speak the language of the Markidians when speaking to those of the other tribe, so theirs must be the common language of the region.

Many parts of it sound similar to Rheini, but it is evidently not quite the same.

The town is a bustle of activity, with things being carried to the Plaza area beside the suspected temple, obviously for trade, and people milling about in the general course of life. Strangers are relatively friendly. Spiofthest will wave, some of who speak what must be a greeting. Markidians merely nod but do not often speak.

Seeing the two, an correctly assuming the men to be visitors, a young man dressed impractically for labor comes from the Plaza to greet them. The man has a well-made wool tunic over an equally made shendyt. The shendyt has been dyed a dark green. The front of the tunic has a dyed gold emblem resembling the Sun. With his other accessories, the man looks to be a clerk or clergy of some kind.

Before Merindell can try to say anything, Sheldon makes a gesture of confusion and replies, "Tudo e' bom."

The young man cocks his head and then begins speaking in Centrin, though it is heavily accented and a bit slurred. "Your general appearances are so similar to everyone else, I did not at first realize that you are Centrin. As we are a way station along the trade route between Boga City and Outpost, I can speak the language of Boga City to facilitate trade. What brings you to Westford?"