Merin motions for Sheldon to follow him, as he begins following the path toward the river. Along the way, he keeps his eyes peeled for further clues. He will also augment himself, increasing his senses, and his speed.


Merindell realizes that in his natural haste, he must force himself to go slower or wait for Sheldon, who cannot keep up. He periodically loses sight of Sheldon, thinking he may have left him behind, when the smart-alec startles him with his unseen closeness. It is easy to forget how well his friend can blend into shadow and remain seemingly non-corpreal.

The path diverges as it nears the river. This was to be expected as the use of various animals becomes more individualized. An unexpected booted print from a person makes the hair on Merindell's arms stand on end. Sheldon points out several definitive wolf prints. It must be a rather large animal.

It is the smell of death that assails Merin before any sights. Fragments of animals spot then litter the area, most no more than bone. About three hours into the forest, the main river cuts at a steep bank and a treefall lays across a near, narrow slough. From the sound, there is a wash-through under the small rocky rise. The wash-through is a likely place for a cave, especially since dangerously small fissures vent to the ground upon which the men are currently walking.

Merin will further augment himself, using the Camouflage and Night Vision tasks, as he slowly and carefully passes over the wash-through and into the cave, motioning for Sheldon to follow. He is alert to the slightest hint of danger as he does so.

Merindell: 30(observation) + 64(enhanced smell) + 132 = 226
Sheldon: 49 + 52(enhanced vision) + 132 = 233
It takes a few minutes but some cursory investigation reveals a place along the slough where something or somethings has been making its way under the treefall.

The cave system is much larger than expected. Apparently at some point passed, during an excessive flood, the river washed the softer or more soluble material away from the harder substrate, leaving a cavern between the main branch of the river and the smaller offshoot. The base of the cave has water washing through it at about ankle depth, more than enough to hide the identity of anything passing through it.

As both men have developed quite some ability to see in the dark, they pause for a second allowing their vision to adjust. It is not specifically necessary. Unexpectedly and a bit forebodingly, torches have been installed to illuminate an area cut farther back into the rock and above the current level of the water.

Moving slowly so as to not make more sound than the moving water, the two men make their way up out of the wash-through and into the cave proper, which is perpendicular to the current path. The path rises and falls, meaning that if the river rose about a stride, this area would flood.

Merindell's nostrils flare and he hold up a hand to halt his friend. He indicates that he can distinctly smell a wet canine, which means that their own scent may very be detected by it, since a breeze from the river occasionally wafts in behind them.

More torches light the area. The cave climbs a bit and turns left. Natural light also comes through small fissures in the rocky ceiling. In a shadowed area about 10 strides off to the left, a large wolf gnaws on a bone. It stands and drops the bone at sight of the men. The cave system continues further on and it has obviously been modified and augmented by the activity of people, none of whom seems to be around.

The wolf emits a low pitched growl and the hair rises on its hackles. This thing is large enough to take down a horse. 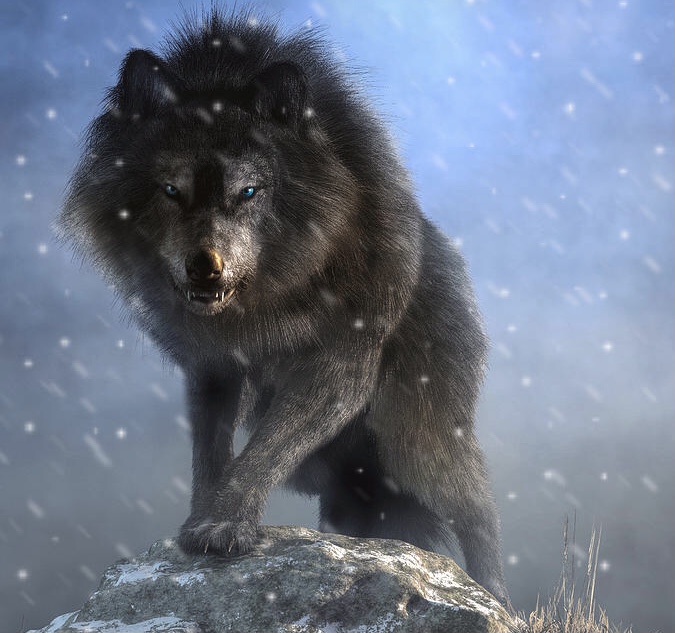 Merin already has several enhancements running; he looks sternly at the Wolf, and decides to start things off with a little Frostbite.

Sheldon winds his lower left arm as if he will toss a stone in and underhanded manner. It is not a stone but a streak of lightning that flies forth.

The wolf makes a high pitched yipping sound and leaps from his bedding area directly at Merin. It will easily cover the 10 strides in two bounds.

Merin is flat on his back with the wolf pressing down on his chest, about to take a bite out of his face. Sheldon is standing about a stride to the creature's left.

Merin will augment his physical attacks with Toxify and perform a short strike at the Wolf's throat, as he attempts to shift his weight, trying to roll the wolf off of him, as he kips up to a standing position.

Unlike most people, Merindell is not really at a disadvantage when lying on the ground. The wolf bobs its head, aiming for the face, but Merin manages to shift his weight, causing the wolf to connect with his right shoulder, instead. It is fortunate. Had that jaw clamped down on Merin's face those two times, he would likely have been dead.

Rolling back with the force of the bite, Merindell punches up at the wolf with the hanbo in his left hand. Having advanced far beyond the need to actual touch his opponent, the mystical accompaniment to his physical assault flows about him like some invisible wave of impediment. The wolf's ability to think for itself is even further reduced. As the wolf staggers it step, Merin kips to his feet, immediately facing the wolf.

Sheldon does something in a seemingly total alien manner to active combat. He ceases to present himself as a threat and starts talking to the wolf in a calming manner, making clucking noises like he was trying to call a pet, dog. Had the wolf been at its full faculties, it would have ignored the call, but being somewhat confused, it pulls away from Merin and runs right passed Sheldon to head farther back into the lighted cave system.

Merindell reflexively touches his shoulder where the wolf managed to bite through both his surcoat and his tunic. The blood on his fingers shows him the significance of the bite.

"Do we want to go after it or see what come to us?"

Merin replies, "Let's go after it, I'd like to see what we could make out of its hide."

Though he is injured, it is not such a great impediment to a focused mind, but the injury does slow him enough to make it routine for Sheldon to keep up. The two men run over the small rise after the departing wolf, veering to the left as the cave turns, descends, and rises again. It is surmised that they have passed, underground, beyond the head of the slough. Water trickles through and runs down the cave wall, but the rock here is solid, structurally.

The natural cave give way to a completely worked subterranean room, with smoothed floor, walls, and ceiling and support columns for the expanse. The room is well lit, not with torches but with lamp globes, something from back in the days of the Yahdram. The glass globes are magically illuminated with the light being able to imitate a flame, if desired. These simply glow, like a will-o-wisp.

Standing in the center of the room is a Kinamin man of about 40 cycles. He is petting the wolf and seems to be comforting it. He looks up as the two men approach, the wolf turning to face them, as well. The man speaks in Amiradthan. "No. No. You should not have hurt my puppy, not my puppy. Now I must make you pay."

Merin reacts instinctively, rushing towards the wolf, whom he gauges to be the biggest threat. His intent is to strike the wolf with the hanbo, and leach some of its health to heal himself.

Sheldon begins to slowly move to his right to add some distance between he and Merindell.

The wolf jerks its head, catching Merin above his left hip, its teeth sinking through the surcoat and tunic to draw blood. Merindell is in trouble.

Sheldon fires off a visible bolt of electricity at the Handler as the air around himself becomes caustic. The Handler twitches as the shock courses through his body, but Sheldon begins to cough and choke as his body feels like it has been pierced all over by needles.

Seeing his predicament, Merin switches tactics. He returns to Toxicity, which had previously proven effective against the wolf. As he does so, he draws power from the Quillion Quill, seeking to intensify the toxic effect.

Unable to target both of his enemies without the risk of effecting his wolf, the Handler focuses his talent upon Sheldon, who in turn suffers the same limitation and focuses on him. Lighting streaks from Sheldon's hand as the air around him burns his lungs. Both men fall victim to the damaging manipulation of the other, leaving both incapacitated, unable to move from where each fell.

Merin, seeing the dire nature of his predicament, attempts to siphon the wolf's lifeforce, in order that he may recover quickly and get to his feet.

Merindell is able to siphon the tiniest measure of life from the wolf into himself but not enough for him to regain locomotion. The wolf does not regain consciousness.

Merin tries his luck with Siphon one last time; he is desperate to kill the wolf, the creature is far too dangerous to be allowed to live. He is also desperate to fuel his recovery with the lifeforce stolen from the wolf; the sooner he can become mobile, the sooner he can render aid to his friend, and save his life.

Merindell is able to siphon a greater measure of life from the wolf into himself, regaining locomotion. The wolf, however, regains consciousness, though it is confused and does nothing but stand up.

Merin will immediately get to his feet, ready to attack the wolf, if it shows further signs of hostility.

The wolf licks the corpse of its Handler then lifts its head, releasing a mournful howl.

Sheldon, who can barely move or speak, makes a faint whistle sound by sucking in a breath through pursed lips. He lifts a feeble hand from his prone body. The wolf stops howling and looks at Sheldon, cocking his head sideways in confusion. A second later, he trots over to Sheldon and begins licking his hand.

Merindell laughs, in spite of himself, then grunts as the motion causes pain in his injured shoulder.