@Scotley, you're up for Phar and the small fire elemental. Tarrak is the only visible foe left. While the rook that fell into the crevasse is still alive, it is no longer engaged in this fight.

Really? Tarrak is alone against all of us?!?

Tarrak is fighting defensively this round.

Tellerian Hawke said:
Really? Tarrak is alone against all of us?!?

Well, there is still Galzadar but he is both entangled and paralyzed. This is the last round the elf wizard is paralyzed.

I hope this goes without saying, guys... we all need to dogpile Tarrak!!

Tellerian Hawke said:
I hope this goes without saying, guys... we all need to dogpile Tarrak!!
Click to expand...

Yeah, for half of this fight we fought to even get to him. The slope was such tactical disadvantage that it would serve us better if we stone spiked the narrow part and just waited for them.

Now fingers crossed he doesn't have 'get up, you slaves' button or some other 'last stand' protection.

Or simple word of recall
(Not to give DM ideas )

@Neurotic @Scotley @ScottDeWar_jr @JustinCase Someone needs to destroy Phre's phylactery. Whomever is closest. The rest of us need to focus fire on Tarrak.

Tellerian Hawke said:
@Neurotic @Scotley @ScottDeWar_jr @JustinCase Someone needs to destroy Phre's phylactery. Whomever is closest. The rest of us need to focus fire on Tarrak.
Click to expand...

Caerth is closest. He just defeated Phre in spear to claw combat.

Headed back to sleep for a while. After that, it will probably be a slow day for me... working on new encounters/scenes for beyond the current fight.

Knightfall said:
Headed back to sleep for a while. After that, it will probably be a slow day for me... working on new encounters/scenes for beyond the current fight.
Click to expand...

in other news, Trappedslider posted a live webcam of the port of New Orleans being blasted the Hurricane Ida. I followed a few cams and ended up Here!

By the way, since I am 10 feet away with a reach weapon, that allows for another to get next to Tarrak.

ScottDeWar_jr said:
By the way, since I am 10 feet away with a reach weapon, that allows for another to get next to Tarrak.
Click to expand...

It turns out that Maur was in a slightly different spot than noted on the last map, so he is in between Quinn and Tarrak. 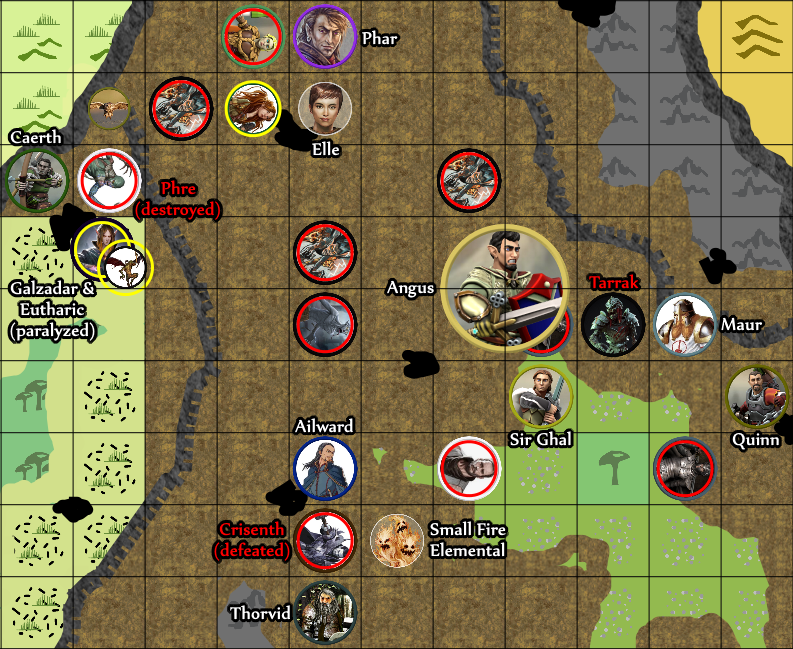 @Scotley, a quick reminder that you're also up for Phar and the small fire elemental. I'm assuming you want Phar to move up the slope and use the staff of defense again. Scarborax transposed Phar with the paralyzed soldier, Tristan, so Phar is now only 10 feet away from Angus.

He can move 15 feet up the slope and cast shield of law from the staff and pick another 7 characters to protect. Besides Angus and Maur, he could also protect Ailward, Elle, Sir Ghal, and the small fire elemental. Both Quinn and Thorvid would just be out of range of the 20-ft. burst.

You could still have Phar cast fly this round and use the staff next round.

The elemental has enough movement to move across and down the slope, through the depression, to reach Tarrak and attack this round.

That's pretty much what I had in mind. Post coming shortly.

So after Phar and the elemental move, Tarrak takes a 5-ft. step over the edge of the crevasse and feather falls down 60 ft. He gets to use a move action to take an inflict vial from his belt and a standard action to drink it. He ends his round 20 feet from the bottom of the crevasse. He will finish falling next round.

Note that feather falling is not considered to be movement. (I looked it up in one of the Rules of the Game articles.) So, neither Maur nor Quinn get an AoO vs. Tarrak as he feather falls away.

Now, I know @Scotley cast feather fall on Aureus, Phar, Quinn, and Lady Pendour just after the bleak eagle tried to bull rush Lady Pendour over the other crevasse. I can't remember if there were other NPCs in range but I'm fairly certain Sir Ghal wasn't and neither was Angus or Maur.

I need to go back and doublecheck which round that was in.

Phar cast feather fall in round nine. It lasts for 1 round/level, so that is nine rounds. It ends next round!

Now, Aureus and Lady Pendour are not going to be feather falling down into the crevasse. Fighting Tarrak in melee would probably be a death sentence for both of them even protected by Shield of Law.

Quinn can take this round to drink one of his potions before feather falling down and Maur can fly down and attack, if @Neurotic so chooses. When does Maur's transformation end?

I have to add a post for Lady Pendour then it is @ScottDeWar_jr turns for Quinn and Neurotic's turn for Maur.

Transformation lasts 7 rounds...mini stats should be up to date

@Tellerian Hawke, if you want Angus to smash Phre's phylactery, he's going to have to get up onto the 40-ft ledge where Caerth was fighting Galzadar, and then Phre. He can't just simply walk over to her and smash the item. He'd have to run to the front of the cave, get on the ledge at its lowest point, run through the area where Caerth cast entangle, and then smash it.

You could also have him try to climb up on or jump up on the ledge, but he would still have to deal with Caerth's entangle spell.

Will my edited, proposed solution work? Would Caerth be able to easily retrieve it?